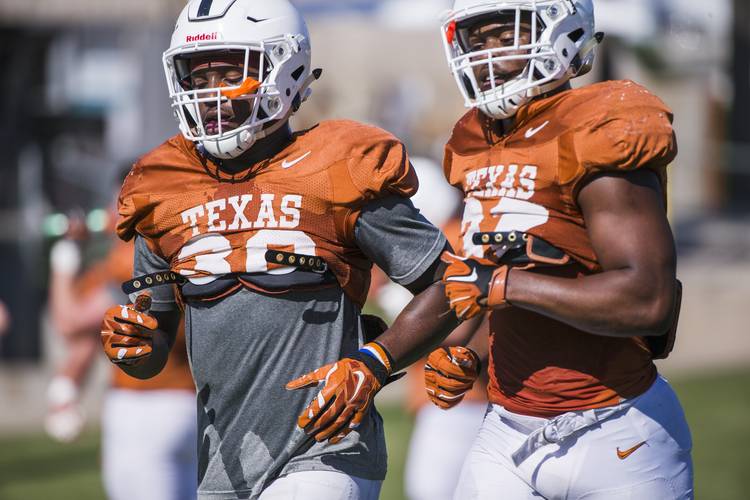 At Texas, running back is a glamour position. Two Longhorns have won Heisman Trophies. Six are in the College Football Hall of Fame. More than 40 of them have produced 1,000-yard seasons. More often than not, a standout running back has led Texas to championships.

Longhorns coach Tom Herman has seven scholarship running backs on his roster. Do any of them have something special?

The entire season may hinge on the answer.

“I think it’s true in general when you’re talking about football, but I think specifically at Texas, you need a superstar for everyone to rally around,” said Ricky Williams, the 1998 Heisman winner who helped Texas win the inaugural Big 12 title in 1996.

“You need a superstar to get guys excited,” Williams said. “Football, especially in the Big 12 these days, you’ve got to have confidence. You’ve got to have that one guy, when the game’s on the line, they’re going to pull through for you. It gives everyone confidence. Tom needs to find that guy and let him be the guy.”

Williams was indeed a superstar, albeit a reluctant one in 1998. He did interviews while wearing his helmet, a de facto shield from outsiders. But his locomotive legs did plenty of work.

“Fans might not be able to tell who the superstar is, but you can tell in practice. You can tell in meetings,” Williams said. “He’s that guy when he steps into the game, if it was a video game, everyone’s ratings would go up a couple of points.”

At this point, none of UT’s running backs currently meet that criteria.

The team’s leading rusher last year was a player who started six games and played in only nine — and was a quarterback. Sam Ehlinger rushed for a team-high 385 yards. The third-best rusher, Chris Warren III, got moved to tight end during the season. Warren was so angry at the coaching staff, he left school early for the NFL.

Spring practice wasn’t much better. Herman was so frustrated by the running backs’ production in late March, he said, “Right now, there are open tryouts at that position.” The coaches pulled a linebacker over to the offensive side to see if he would hold onto the ball.

Herman walked back that sentiment by the end of spring. “Do I wish we had made the giant leaps that maybe some other positions made? Yeah, maybe,” he said after the spring game. “But I would be selling them short if I didn’t recognize a little bit of improvement.”

If coaches wanted to give one running back 20 carries per game, there’s not an obvious choice.

Kyle Porter, a true downhill runner from Katy, averaged 3.7 yards per carry his first two seasons. The coaches believe Toniel Carter has issues with ball security. Daniel Young started the last five games last season and finished with 325 yards, but he needed to get stronger.

Kirk Johnson has played in only seven games since the start of the 2015 season due to various injuries. Tristian Houston has had injury issues, too, including a hyper-extended knee last spring when he needed to make a good impression.

And then there’s freshman Keaontay Ingram, who had back-to-back 2,000-yard seasons at Class 4A Carthage. Herman casually mentioned that Ingram’s “got some wow in him.”

“I love him already. He’s a great kid,” Ehlinger said of Ingram. “He’s a guy who has football smarts. He has really good wiggle as well.”

But the best Texas running backs were dang near impossible to bring down. That’s been true regardless of the generation. Chris Gilbert had three straight 1,000-yard seasons in the 1960s. Roosevelt Leaks had back-to-back 1,000-yard years in 1972-73. Eric Metcalf had 1,161 yards in 1987. Shon Mitchell (1995) and Hodges Mitchell (1999, 2000) did it, too. Cedric Benson, Jamaal Charles and D’Onta Foreman all were 21st-century runners who galloped their way into the UT history books.

“We don’t have a D’Onta Foreman just yet,” Herman said. “You can’t play seven of ’em, but we’ll probably play at least three of them throughout the course of a ballgame.”

Used to be Texas needed only one.

“You want to hear my Earl Campbell story?,” NFL Network analyst Mike Mayock recalled in the spring. He played safety for Boston College in 1976 when Texas lost a road game there 14-13. The Longhorns opened the ’77 season against the Golden Eagles at home.

“It was about 110 degrees out on that field,” Mayock said. “I chased Earl Campbell about 60 yards on an option away from us, and just before I got there, he got pushed out of bounds. And I wound up and hit him anyway. I figured if I ran 60 yards, I might as well take a shot.

“I wound up as hard as I could with my right forearm, and as dumb as I am, I hit him across his helmet,” Mayock said. “To this day, he doesn’t know I cheap-shotted him because I just bounced off him. I shattered my forearm. Missed the whole year and redshirted. That’s my Earl Campbell story, for better or worse.”

Phil Bennett, a longtime college football coach, grew up in East Texas and has basically known Campbell his whole life.

“If you ever hit him just in the hole, it was like trying to grab a damn refrigerator,” said Bennett, who played college ball at Texas A&M. “We would swarm around him, and then all of a sudden, you’d see No. 20 come out of it. His balance was uncanny. You couldn’t knock him off his feet. His speed was so deceiving.

“If your pad level was slightly off, he was the hammer and you were the nail.”

Right now, Herman is the one hammering on his group.

“I would think after Saturday (scrimmage) that order will be set,” Herman said.

Is there a magnificent one among these seven?

Here’s a look at the seven running backs on the Texas roster this year: