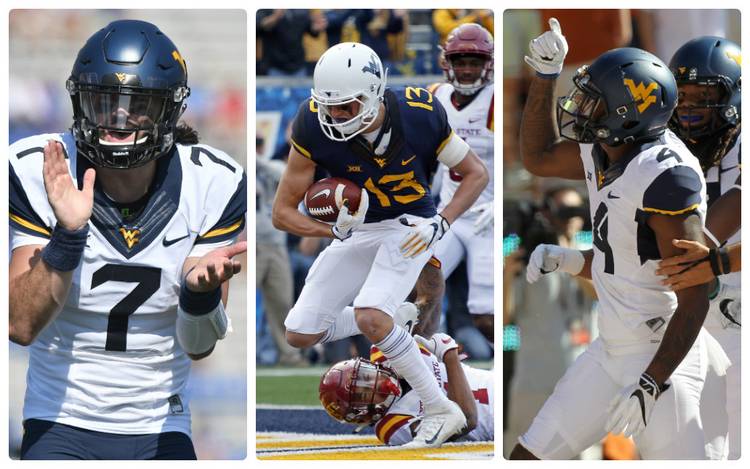 We’re wrapping up our tour of the top quarterback, running back and wide receiver of every Big 12 team.

West Virginia coach Dana Holgorsen loves all the preseason chatter about his offense.

He knows all the schools expected to contend for the Big 12 have offensive weaknesses, save for his school.

The Mountaineers feature a preseason Heisman Trophy candidate in quarterback Will Grier and probably the best receiving group in the country.

They are missing an established name at running back, but Holgorsen has four candidates for the job and could use them all.

Primarily because of the offense, WVU is predicted to finish second behind Oklahoma in this year’s conference title race. Holgorsen is even having to answer questions about that dreaded of all football buzz words: Expectations.

“Well, we welcome expectations,” said Holgorsen, whose team has produced only one season of double-digit wins since WVU joined the Big 12 in 2012.

“Heck, you want ’em to talk about you. We want you guys to talk about us. I think we got a good group coming back. Had a decent year last year, did some good things offensively. But there are a whole lot of things that I feel like we can do better and our guys think they can do better.

Grier, a senior, must shoulder heavy expectations. A year ago, he averaged 313 passing yards a game, which ranked third in the Big 12 behind Mason Rudolph and Baker Mayfield. He missed the final two games because of a finger injury he suffered against Texas.

His passing numbers could soar this season.

WVU returns Gary Jennings, whose 97 catches a year ago were fourth-highest nationally and second among Power 5 receivers. Then there’s David Sills V, the converted quarterback. His 18 touchdowns led the nation. He was headed to a more spectacular season, but didn’t catch a TD pass the rest of the year once Grier was lost.

A third option for Grier is Marcus Simms, who averaged nearly 19 yards on each of his 35 catches. T.J. Simmons, who transferred from Alabama, also is expected to be a big part of the receiver rotation.

The questions are at running back. Who will replace Justin Crawford, who put together consecutive 1,000-yard seasons? Holgorsen’s offense is known for big passing numbers, but it needs a running game to sustain itself.

Kennedy McKoy is the leading contender. He posted two 100-yard games a year ago and averaged about 10 carries a contest. He also was the team’s wildcat quarterback after Grier was hurt. Martell Pettaway enjoyed an impressive debut game in 2016, rushing for 181 yards against Iowa State. Alec Sinkfield and Leddie Brown also are competing for playing time.

Offensive coordinator Jake Spavital told reporters the race is too close to call: “I just want to see a guy step up and I think all four of them have stepped up.”

McKoy told the local media: “Nobody has a job right now. We’re all pushing each other, and we’re all rooting for each other. We’re all together.”

The Dotted Line: Texas’ obsession with football made Chris Adimora love the Longhorns

Star search: Seven Longhorns are vying to win the starting job as Texas running back