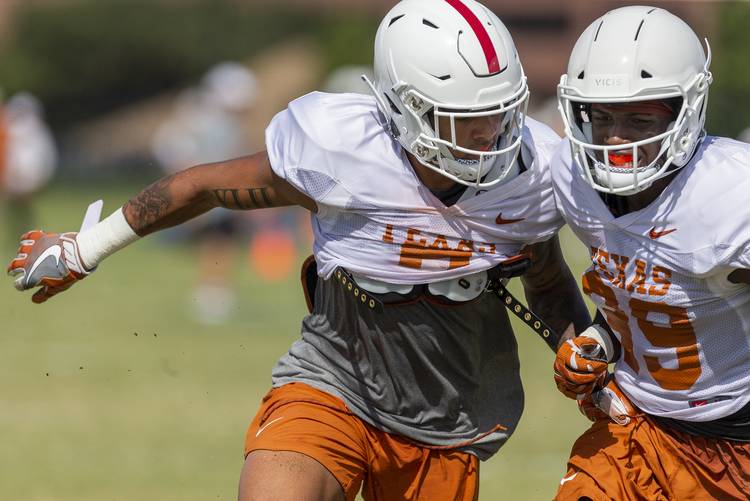 Texas defensive coordinator Todd Orlando doesn’t sugarcoat anything. So if he’s happy with some of the freshmen in the “#RevolUTion18” recruiting class, then they must be impressive.

“Normally when you have a recruiting class, what you see on film is maybe not what you get,” Orlando said after Saturday’s practice. “But when we look at the whole collection offensive- and defensive-wise, we can’t see anybody that you’d say is a quote-unquote bust.”

Freshman safety Caden Sterns has already earned a starting job, it appears, fueling the notion that early enrollees do get a head start on others. Rated as the nation’s second-best safety prospect, Sterns had 11 career interceptions in high school.

Orlando believes safety is one of the most difficult positions on the field. But Sterns may be a natural. There has been virtually no hand-wringing about who will fill the void created by DeShon Elliott’s early departure to the NFL.

“That’s a lot of thinking back there at that position, and there’s a lot of communication,” Orlando said. “When you’re a young guy coming into it, especially with vets that played in a system, you can be a little hesitant. He’s taken over. He’s got big speed, big range. We’re really fortunate to have him. He’s a really good ballplayer.”

Defensive back B.J. Foster and linebacker Joseph Ossai are two other newcomers who are likely to play in the season opener against Maryland.

Building the depth chart: Orlando said the offense won Saturday’s scrimmage inside Royal-Memorial Stadium. The coaching staff invited the players’ families to watch the closed scrimmage, mostly as a reward for getting through camp.

This weekend, Orlando said, the staff will rank every defensive player. His goal is to get the 11 best on the field, regardless of position. With less than two weeks before the season opener, the Longhorns will now shift into game preparation mode.

“It’s still a run-and-hit business — you know what I mean?” Orlando said. “We’re not a schematic, just try to trick you team that will beat you with whole bunch of movement. That’s not what we pride ourselves on. We pride ourselves on fundamentals, running to the football and hitting people.

Confident Davante: Starting cornerback Davante Davis has missed some practice time with a hamstring injury. He’s expected to return this week. Orlando praised Davis’ development. He was a backup last season but started the final four games after Holton Hill was suspended.

“He’s got a personality now. He’s got some confidence,” Orlando said. “If he does get beat on a play, he can just wipe the play away and go on to the next one, which I don’t think necessarily was the case when we got here.”

No updates on Boyd: Linebacker Demarco Boyd appears to be in no-man’s land with the UT football program. The sophomore is currently suspended after being charged with misdemeanor assault in connection with a multivehicle car crash July 4. There has been no major movement in the case.

“In my opinion, he’s no longer a part of this team right now,” Orlando said. “From our standpoint, we’re moving forward until Tom Herman tells me something different.”