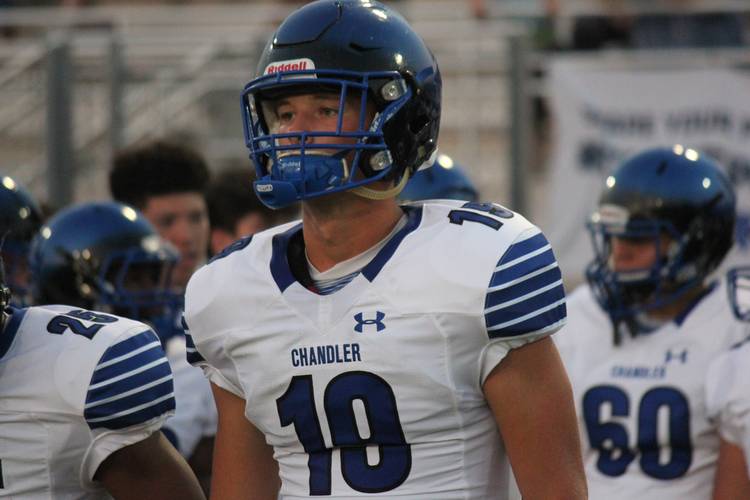 SAN BERNARDIDO, Calif. — It came as no shock to the Liebrock household when offers started piling up for four-star tight end Brayden Liebrock. His dad played college football. As did his older brother and uncle. It runs in the family. Football is spelt out in the D.N.A. The 2019 Texas commit pulled the trigger in May, and it’s now time to put his focus toward the senior season.

“It’s nice to know my landing spot. I can just focus on my game and my senior season instead of being distracted with recruiting,” Liebrock said after his Chandler (Ariz.) squad dropped its first game of the season, 35-13 to California powerhouse Centennial High last Friday. The Chandler offense struggled to find a rhythm in the passing game.

Liebrock finished the game with the game with three catches for 21 yards. Two of those receptions came on the first drive of the game, as Liebrock split wide and moved the chains on third down on both receptions. He also forced a pass interference in the end zone to set up Chandler’s first touchdown in the second half.

Liebrock started playing organized sports at the age of four. He gravitated toward baseball and football, ultimately choosing to concentrate his efforts towards the gridiron instead of the diamond. It was the right decision. The 6-5, 215-pounder picked up 23 offers and ranks as the No. 7-ranked tight end in the 2019 cycle, per the 247Sports composite. Liebrock is the No. 179-ranked prospect in the entire class.

“There is no other feeling like running out on the football field. Baseball never gave me that feeling,” he said. “I have a passion for the game and love what I do.”

The recruiting process isn’t easy. The prospects aren’t the only ones under stress during the process. Parents also feel the weight of modern day recruiting. Shannon Liebrock, the mother of one of Texas’ future weapons at tight end, watched her son get hammered with texts and phone calls from schools across the country. Both are now relieved that the process is finished.

“Brayden would get texts all day and all night, on the weekends and even on holidays. He handled it well. Most of the coaches are respectful, but it does get busy and overwhelming,” Shannon said. “Texas’ coaching staff takes the kids under their wings, and the school is unbelievable academically. Take away football and it was still the right school for him.”

Brayden says Texas offers the entire package. He loves Austin. The university is academically sound and the football team is prestigious. It’s also a program who uses tight ends in the same manner Brayden is deployed at Chandler. He’s listed as a tight end but spends 90 percent of his time split out in the slot or outside. He hopes to gain 15 pounds before enrolling in Texas next summer.

“I love the way Texas uses the tight end in a wide receiver role. They mix it up with the tight ends, and let us play both positions, spit out and get into the backfield,” he said. “As soon as I stepped on campus, I felt at home. The coaches and players welcomed me with open arms. I love Austin and I’m excited to be part of the program.”

Brayden plans to attend the USC game in Austin along with numerous other 2019 commits, targets and 2020 recruits.

“It was a huge weight off his shoulders when he made the commitment,” Shannon said. “Now, he gets to be excited. I can’t be prouder. He can’t wait to get to Austin.”