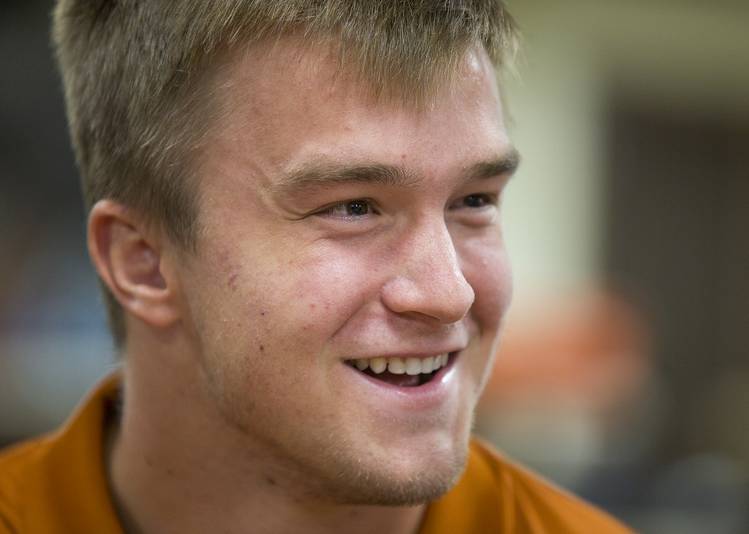 Less than two weeks before the season opener, Texas coach Tom Herman is starting to firm his starting lineup. No better place to start than quarterback.

Herman said Monday that sophomore Sam Ehlinger will be the starter against Maryland on Sept. 1. Junior Shane Buechele “didn’t really do anything wrong,” Herman said, and was predictably disappointed when told the news. But Ehlinger will work with the first-team unit on Wednesday when the Horns return to practice.

“I think barring any sort of catastrophe between now and the Maryland game, that’s the way it’ll be,” Herman said. “We’ll see as the next whatever 12 days progress if that merits a change, but as of now that’s what we’re planning on.”

If offensive linemen start to get hurt, “that’s when the shell game begins,” Herman said. Offensive line coach Herb Hand has been training multiple players at guard and tackle to increase their versatility.

There is still no clear-cut starter at running back. Herman said all seven candidates can be broken down into three tiers. Daniel Young, Tre Watson and Keaontay Ingram are the leaders. Then come Kyle Porter and Toniel Carter in the second group. Kirk Johnson and Tristian Houston are in the third group, per the coach.

“I don’t know if that’s a pecking order or not,” Herman said, “but I think in terms of amount of reps that guys get in practice, the percentages will reflect that.”

On defense, Herman conceded what has been obvious all August — talented freshman Caden Sterns will start at safety alongside Brandon Jones. What’s more, fellow freshman B.J. Foster will be Sterns’ backup.

Herman expects senior Davante Davis, who has been slowed by a hamstring, to return to practice this week and will start opposite Kris Boyd. While Davis was out, redshirt freshman Kobe Boyce was working with the first-team defense along with freshman Anthony Cook.

Coaches need 22 starters to fill out an offensive and defensive lineup. But fans care mostly about only one. QB1, to be specific.

Herman said he does not expect to rotate Ehlinger and Buechele during the Maryland game. This is Ehlinger’s job to lose henceforth. “If there’s a scenario if things aren’t going well, we could throw Shane in there for a spark,” Herman said “But we’re certainly not going to guarantee that.”

Buechele started the season opener at home against Maryland last season. He completed 34 of 52 passes for 375 yards and two touchdowns but suffered a bruised shoulder in the process. Ehlinger started the next two games and then he got hurt. Buechele ended up starting seven games while Ehlinger started the other six.

“He’s throwing the ball a lot better,” Herman said. “He’s sitting in the pocket much more comfortably. Let’s make no mistake, Shane Buechele had a great camp. A great camp. Didn’t really do anything wrong.

“Just feel like there’s a lot of years of coaching experience on our staff, and neither of them did anything to justify saying that you can’t win with that guy,” he added. “It was just a matter of who do we feel give you the best chance to win in the first game and see if we’re right.”

Asked about Buechele’s response, Herman said, “At some point, you can probably ask him. I don’t want to speak for him. But he was disappointed. He was mature about it, and said, ‘I’ll be ready.’”

Earlier this month, Buechele said he hated standing on the sideline as a backup last season. “That drives you a little more to get that in your mind and help it in the competitive battle that I have,” Buechele said on Aug. 2.

Ehlinger has never carried himself as someone who is better than Buechele. By all appearances, they seem to be competitive friends. Still, both want to play. “Personally, I am going to do everything I can in my power to protect the football and maintain and move the offense,” Ehlinger said earlier this month.

As of now, Ehlinger gets the first opportunity against the Terrapins.

Texas ranked No. 23: Herman’s decision-making and Ehlinger’s talents may be two reasons why college pollsters believe in the Longhorns. The program will start the year ranked 23rd in the Associated Press Top 25 poll. That’s where UT started last year but dropped out after the season-opening loss to Maryland. The Horns finished 7-6.

No program in the last four years has started outside the top 20 and reached the College Football Playoffs.

The Dotted Line: A look at the recruiting classes, rankings across the Big 12