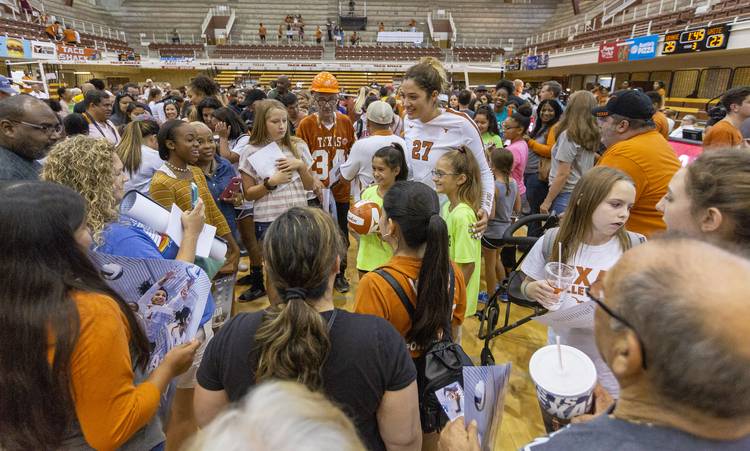 Texas senior Yaazie Bedart-Ghani (27) poses for photos after an intrasquad scrimmage at Gregory Gym, on Aug. 18, 2018. (Stephen Spillman / for American-Statesman)

Nwanebu, in town to play in UT’s Orange-White scrimmage, was attempting to make plans with her two former teammates who could not decide who would host. Bedart-Ghani played the puppy card and argued that Nwanebu had never seen her house. Johnson countered that the home she shares with four teammates has a hot tub. Plus, Johnson pointed out, she had recently been to Bedart-Ghani’s.

Bedart-Ghani excitedly objected to that last point, arguing that her house was merely a convenient stop on the way to Johnson’s favorite movie theater.

For Bedart-Ghani, laying out her case against Johnson was merely practice. She has long had an eye on law school — the Los Angeles native began watching episodes of “Law and Order: SVU” when she was 12 — but the courtroom really became her calling after she took William Kelly’s sociology of criminal justice class at Texas.  Passionate about criminal justice reform, the aspiring prosecutor recently took a trip to San Francisco with her uncle to meet with prosecutors and defense attorneys.

The courts that Bedart-Ghani will concern herself with this fall, though, are in volleyball gyms. Texas, the third-ranked team in the AVCA’s preseason poll, opens its season this weekend against No. 18 Oregon and No. 7 Florida. The two matches are a part of the annual VERT Challenge, which is being hosted this year by Nebraska.

Bedart-Ghani, an outside hitter, has been named a team captain for a second straight year. She’s joined by junior Orie Agbaji and sophomore Ashley Shook on Texas’ leadership council.

Bedart-Ghani, however, is the team’s voice.

Texas coach Jerritt Elliott has described her as measured and mature. Johnson says “loving” is the one word she’d associate with her lone classmate. Junior Autumn Rounsaville articulated that Bedart-Ghani is upfront with her teammates and isn’t one who is “trying to beat around the bush.”

Added freshman outside hitter Logan Eggleston: “She just knows so much more about the game and just about our program. She’s just done a good job of teaching us that and making sure we know what the expectations are always.”

The quality of Bedart-Ghani’s leadership may best be exemplified by how she’s handled the trajectory of her career. She arrived at Texas in 2015 alongside Johnson and outside hitter Micaya White, who redshirted that fall due to an injury. After appearing in 24 of UT’s 33 matches as the nation’s fifth-ranked recruit, the 6-4 Bedart-Ghani was moved to middle blocker — a position she last played in middle school — to help UT address a need during its run to the 2016 NCAA title match. She moved back to the right side last season, but fell behind Nwanebu on the depth chart and appeared in only 18 matches.

Admittedly, she wanted to play more. Leaving Texas, however, was never an option.

As for this fall, Bedart-Ghani conceded that “I don’t know what the season holds.” She will likely open the year as the starter on the right side ahead of freshman Katarina Luketić and Agbaji. Earlier this summer, Big 12 coaches placed Bedart-Ghani, Johnson and White on their preseason honor roll.

For her career, Bedart-Ghani is hitting .338 and averaging 1.70 kills per set. She also has developed a knack for standing out on the biggest stages.

Bedart-Ghani had 11 kills in the 2015 NCAA championship match, and she matched that statistic in the NCAA’s 2016 finale. Last December, she came off the bench in the third set of a five-set win over Utah and led Texas into the NCAA tournament’s fourth round with a 12-kill outburst. When Texas opened its postseason run in 2016, she recorded 13 kills on 14 attempts in a sweep of UT-Rio Grande Valley.

Yet Bedart-Ghani says her finest moment as a Longhorn featured a modest seven kills. Complemented by eight blocks, those seven snipes helped Texas beat BYU in a five-set thriller in 2016. UT twice fought off a match point in that Sweet 16 showdown in Gregory Gym.

“We were watching film the next day and I thought we lost,” Bedart-Ghani recalled with a laugh. “That was one of the biggest moments I’ve seen a team come together and fight. That was my favorite moment here at Texas.”

Bedart-Ghani’s father and two brothers played college basketball, but she never cared for the sport. Too much running, she mused. Swimming and soccer also didn’t stick. The mother of one of her brother’s teammates suggested she give volleyball a try.

Nearly 10 years later, Bedart-Ghani is ready for one last run with the Longhorns.

“It’s been crazy just how fast time has moved,” she said. “I have had a great career here at Texas and I’ve learned a lot. It’s all kind of culminating into this final season, and I’m just really excited.”

Texas’ season tips off on Friday. The Longhorns went 27-3 in 2017 but failed to reach the Final Four for the first time since 2011. Head coach Jerritt Elliott enters his 18th season with a roster that blends both veterans and youth.

Texas, ranked No. 3 to start the season, plays five top-10 teams in the first eight matches. After opening with No. 18 Oregon and No. 7 Florida this weekend, the Horns travel to No. 9 Wisconsin on Sept. 1 and host No. 5 Kentucky on Sept. 7. And Texas gets top-ranked Stanford in a home-and-home series the second week of September.

The Dotted Line: Texas’ wish list narrowing at some positions, remains open at others

The Dotted Line: Six Texas commits set for action over next three days