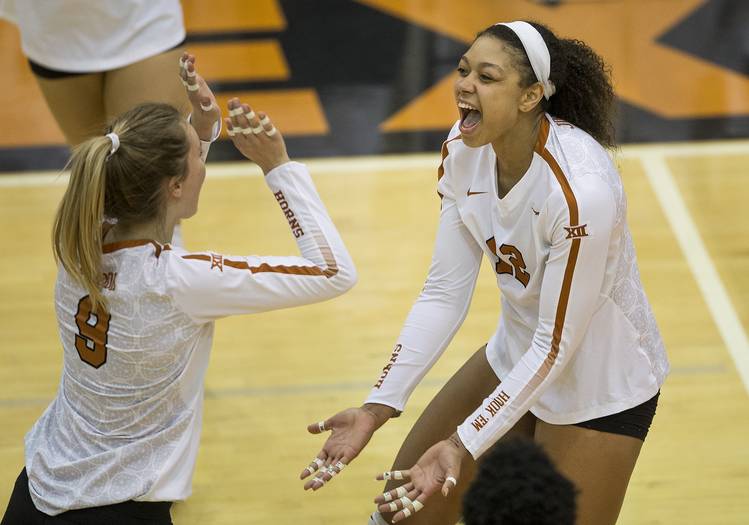 The Gators (1-1) darted to a 5-1 lead in the final set, but four straight Texas points tied the score at 9. Brionne Butler’s solo block put Texas (2-0) ahead for good 11-10. Three straight Florida misfires gave the Longhorns the only match point they would need. A triple block led by Micaya White, Texas’ 20th of the match, ended it.

“Our coaches stayed up until 1:30 last night looking at film. We had a good game plan; it was easy to stick to,” said Morgan Johnson, who was in on six blocks.

Texas was second in the nation at 3.1 blocks per set last season, but in Friday’s win against Oregon, the Longhorns had eight blocks in four sets.

“Oregon is a lot faster, which makes it harder to get straight down-blocks. It’s just a difference in systems,” Johnson said.

The Gators, who had beaten host Nebraska on Friday, hit .170 and had nine errors in their last 14 swings.

Butler had nine kills and hit .500. UT coach Jerritt Elliott said his middle blocker has to become more a part of the offense.

“We’ve got to be able to find our middles a lot more,” he said. “Butler’s too good to have only 14 swings.”

Both teams were hitting .500 or better midway through the first set, but then Texas’ defense stiffened. A 5-1 run put the Longhorns ahead 19-15, and Texas led by at least three the rest of the set. White, who had a team-best 17 kills, and Johnson teamed up for Texas’ fifth block on set point. The Longhorns had just two hitting errors and hit .500.

The second set was entirely different. Florida led the entire way, hitting a meager .162, but that was still much better than Texas’ .059. Florida erased an early deficit in the third set with a 6-0 run. Texas recovered to take a 19-17 lead, but the Gators responded with a 5-1 run. Texas committed two violations during the decisive run — one for being in the net, the other for lining up incorrectly while receiving a serve.

“You’re going to have that,” Elliott said. “We got a little loose after the first game.”

Though it is August, Elliott is already looking to December. He hopes these wins will help his team earn a top four seed, and thereby host a regional in the NCAA Tournament.

“If we can protect our home court and win the Big 12, we’ll be in consideration for that,” he said.

Elliott said a loss to Florida at the start of last season kept his team from hosting a regional.

“That’s what we were told by the NCAA Committee,” he said.

Note: Elliott caught up with Florida freshman Thayer Hall before Saturday’s match. Elliott coached her during the 2016 Pan American Games. He heaped praise on Hall, who not only helped Team USA win the gold medal, but also was the tournament MVP as a junior in high school.

She was golden Saturday, finishing with 21 kills and 15 digs.

Texas volleyball team polishes off No. 18 Oregon in Nebraska tournament