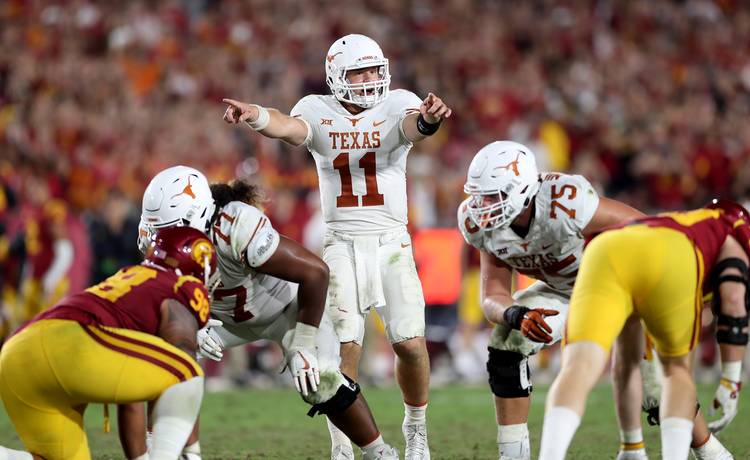 There’s a notable change, a certain gravitas, in how Texas players talk about the starting quarterback now. For the first time in years, it sounds as if the Longhorns believe wholeheartedly in the chosen starter.

Saturday’s season opener against Maryland will be Sam Ehlinger’s chance to justify it.

“Being a sophomore, once he got named starter, I could tell it helped his confidence,” wide receiver Collin Johnson said on Tuesday. “Now he just embraces the role that’s been placed on him. You can’t shy away from that. He won’t.”

Center Zach Shackelford said Ehlinger has grown more comfortable operating with the same offense for a second straight season. “It’s just kind of a calm confidence that he has that reassures us all that we know where we’re supposed to be,” Shackelford said. “It’s just nice to have him.”

“Even though we can’t hit the quarterback, I used to get so mad at him while chasing him on third downs — dude, throw the ball,” Hager, a UT defensive end, said. “Now, he’s not scrambling, he’s just throwing the ball and beating us with his arm and not his legs.”

Texas coach Tom Herman named Ehlinger the starter on Aug. 20 when game prep began in earnest for Maryland. He was adamant then that junior Shane Buechele did nothing wrong. Herman echoed that sentiment at Monday’s press conference.

“I think just the experience that we have saying, OK, game one, who gives us the best, not the only, but the best chance to win the game starting?” Herman said. “And we decided it was Sam.”

Ehlinger started six games last season and threw for 1,915 yards with 11 touchdowns and seven interceptions. He also led the team in rushing with 385 yards. His hard-charging style led to some incredible takedowns, most notably against Oklahoma, and at least one diagnosed concussion against Oklahoma State.

Buechele started the other seven games. He threw for 1,405 yards with seven touchdowns and four interceptions. He’s not as mobile, though; Buechele ran for only 99 yards on 62 attempts.

“I’m sure coach Herman told y’all, he had a very, very good fall camp and looked really, really good,” Ehlinger said. “To understand we’ve both been playing at such a high level and competition and pushing each other to levels we didn’t know we could compete at, it’s exciting.”

Herman, the offensive coaching staff, his teammates, managers, fans, in fact just about everyone loved Ehlinger’s toughness and demeanor last season. But it’s hard to overlook three late-game turnovers that resulted in losses.

Ehlinger fumbled on the goal line in double-overtime against USC. He threw a game-ending interception against Oklahoma State and a key interception late against Texas Tech.

No matter what kind of environment Herman creates in practice, nobody can say for sure how Ehlinger will react when the pressure’s on again this fall.

“That’s something I’ve grown tremendously since the spring is understanding the situation,” Ehlinger said. Sometimes it’s OK to throw the ball away and punt, he said. Other times, the quarterback knows he needs to dive for the first down.

“I feel that I have that ability to be named the guy,” Ehlinger said. “That means they have confidence in me, and they know how I play the game and what I bring to that. Obviously that doesn’t mean I can go out and throw six interceptions in the first half and be OK. But I do know that I’m able to play with confidence and be who I am.”

Every offensive player that’s met with reporters this month has raved about the unit’s chemistry and consistency. This football program has gone through five offensive coordinators since 2014. The Longhorns have blown through four offensive line coaches since 2015, literally changing personnel each of the last four seasons.

It’s hoped all that turnover stops with Herman at the helm, although he brought in new offensive line coach Herb Hand this season. The previous line coach, Derek Warehime, is now coaching tight ends.

“This is the first time anyone on this football team has been in the same offense for two years in a row,” receiver Collin Johnson said.

“It was pretty eye-opening to see how far behind we were offensively in the understanding of what we were doing,” he said. “There were some very obvious thing that we would obviously pick up now.”

That only happens via consistency with the coaching, the playbook and the personnel. Add it all up, and it makes for one confident quarterback.

“Now with the experience and the knowledge of what we need to do and what they’re going to do,” Ehlinger said, “I’m excited for what’s to come.”

Texas LB Gary Johnson sparking unit that likes to ‘light into people, over and over again’