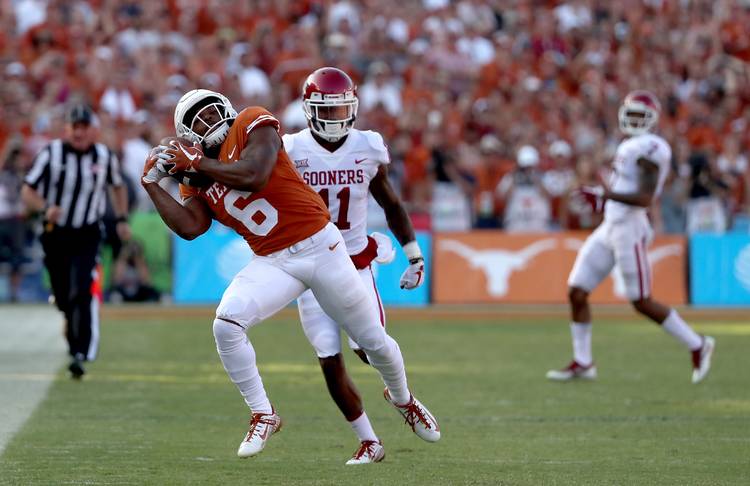 This week’s notable number is 29 — the number worn by sophomore Josh Thompson, who enters this year as the backup to nickel back P.J. Locke III; the number of touchdowns scored last season by Longhorns who are still on the roster; and the number of completions that were needed (Major Applewhite in 1998, Chris Simms in 2002) for two of the five 400-yard passing games in UT history.

And 29 also represents the number of catches that junior receiver Devin Duvernay has recorded in his first two seasons.

Duvernay, once a four-star recruit, arrived at UT in 2016 after backing out of a commitment to Baylor in the wake of the school’s sexual assault scandal and Art Briles’ subsequent firing. Duvernay instantly became a home run threat for then-offensive coordinator Sterlin Gilbert; his 412 receiving yards ranked second among the Longhorns. He also averaged 20.6 yards per catch, the highest for a UT receiver with at least 10 season receptions since 2005. Those numbers were boosted by 63-, 75- and 80-yard scores.

Duvernay, however, fell off the radar in 2017. He appeared in all 13 games but logged only one start and nine receptions. He also was shut out of the end zone, and his longest catch covered 42 yards. (As a team, Texas had only one offensive play that covered more than 50 yards).

“It was (tough), just a whole bunch of new things being thrown at you,” said Duvernay, who threw water on the off-season scuttlebutt that he was considering a transfer.

As he enters his second year with UT offensive coordinator Tim Beck, Duvernay assesses that he’s become more focused. The 5-11, 210-pounder joined a handful of Longhorns who recently squatted 600 pounds in the weight room. This offseason, Duvernay says he worked on his route-running.

Texas asks its Z receiver to stretch the field, and Duvernay certainly has the speed to handle that assignment. He won a Class 6A title in the 100-meter dash in 2015 with a time of 10.27 seconds. Earlier this month, quarterback Sam Ehlinger applauded Duvernay’s speed. Mark Behrens, Duvernay’s high school football coach, once told the American-Statesman that “I don’t know what constitutes world-class speed, but he’s got plenty of it.”

With Lorenzo Joe graduated and John Burt injured, Duvernay is UT’s announced starter at the Z receiver position with senior Jerrod Heard pushing him for reps. UT coaches have talked up Duvernay throughout the offseason. A section in the team’s official game notes this week was even labeled “Duvernay preparing for bigger role.”

What exactly will that role be? Go deep, retorted junior Collin Johnson on Tuesday while motioning the arm in a downfield motion.

“That man, he can fly. Watching him run every day in practice, he’s one fast guy,” Johnson said. “That’s just not his only thing. He can catch the ball, has strong hands, a good route-runner. That deep threat he brings to the table’s huge. The whole world is going to see a lot of that deep ball with him, in my opinion, this year.”

Duvernay had two catches and 43 receiving yards in UT’s spring game. One of those was a 29-yard catch against his twin brother, Donovan, who is a defensive back for the Longhorns. Next up: Duvernay’s fourth career start, which will come against a Maryland team that allowed 228.6 passing yards per game in 2017.

“I have a lot of confidence in myself to do that job,” Duvernay said. “When coaches ask me to do something or put me somewhere because of something, I take on that task with a full head of steam and continue to develop that aspect of my game.”