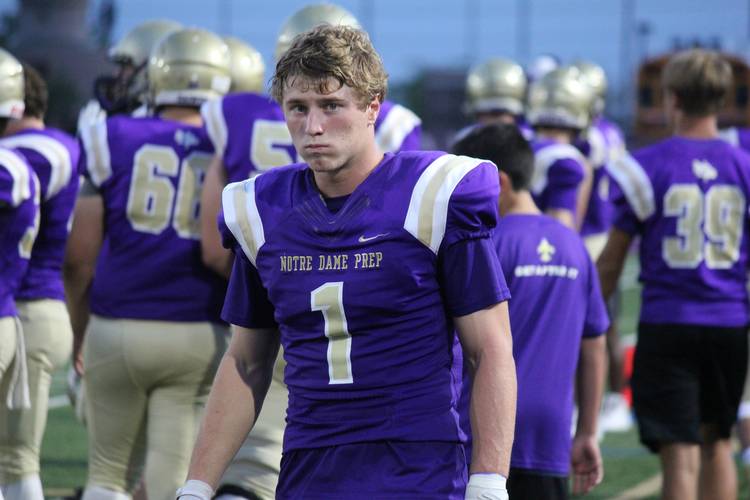 Four-star wide receiver Jake Smith, who will sign with Texas this week, became the first Arizona high school player with 1,000-yard rushing and receiving seasons in the same year since 2011. (Mike Craven)

SCOTTSDALE, Ariz. — Texas commit Jake Smith is off to a fantastic start to his senior season. The four-star slot receiver from Notre Dame Prep (Ariz.) has scored 11 of his team’s first 12 touchdowns, helping the team to a 2-0 record. Smith rushed and received for more than 1,000 yards as a junior, becoming the first player in Arizona to do that since Christian Kirk. He also led his team to the state championship game, though the result didn’t end in Smith’s favor. The 6-1, 189-pound offensive weapon committed to Texas on June 3. He’s ranked as the No. 17 wide receiver prospect in the class and the No. 87 overall prospect in the nation.

It was my freshman year. I played select baseball growing up and didn’t play real organized football until ninth grade. There was something about going to battle with 60 other brothers that appealed to me. It’s the most intense sport, and I love that about football. It gave me a feeling baseball didn’t.

I fell in love at the spring game. I could tell the fans were as crazy about football as I am. Football is a religion in Texas. It was the complete package to me, from academics to football to the city. It was down to Texas and USC for me. I loved California, but I hated Los Angeles. Austin is a great city that offers everything.

To make it back to state and win it this time. I also want to repeat the 1,000 yards as a receiver and rusher like I did as a junior.

I wanted to feel at home. Some places were awesome, but it didn’t feel like home.

Caring. He was the head coach who cared most about his players out of all the places I visited.

All over the field on offense and in the return game, especially punts. I’ll play primarily slot receiver, but can be used in what Texas calls the ‘H’ position. I can line up in backfield as a running back or get the ball as a receiver or in jet-sweeps.

‘Prove us right’: Texas players open focused on themselves, not Terps