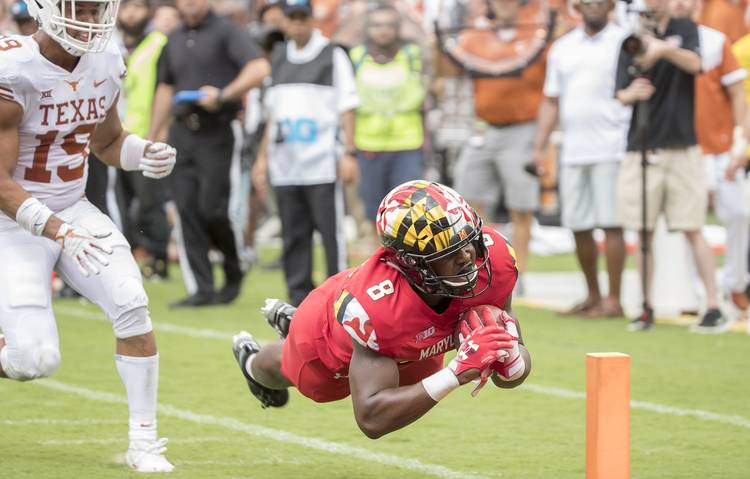 Maryland running back Tayon Fleet-Davis (8) dives into the end zone for a score Texas at FedEx Field in Landover, Md., on Sept. 1 , 2018. RICARDO B. BRAZZIELL / AMERICAN-STATESMAN

LANDOVER, Md. — There were 155 snaps taken in Texas’ 34-29 loss to Maryland on Saturday. Here are five that ended up making a big difference:

Maryland took the opening kickoff and put together a six-play touchdown drive that left Texas in an early hole. The teams then traded punts before a nice return by Brandon Jones gave Texas the football at the Maryland 39. On the first play of UT’s second drive of the season, Sam Ehlinger lofted a deep pass that Devin Duvernay tracked down and caught while diving into the end zone. Duvernay’s catch would account for 79.6 percent of the offense that Texas totaled in the first quarter. The touchdown was also the first for Duvernay since an 80-yard catch against Kansas State in 2016.

uhhh guys we have an early catch of the year alert 👀 pic.twitter.com/oxa0rxd3ww

2. Putting together a hat trick

Maryland freshman Jeshaun Jones recorded a 28-yard touchdown run and a 65-yard touchdown catch on the first two touches of his collegiate career. Jones then threw a 20-yard touchdown pass in the second quarter, and ESPN reported that he was the first player to earn a hat trick against Texas since Oregon’s Joey Harrington in 2000. On his touchdown catch with 8:52 left in the first quarter, Jones found a hole in the secondary that opened when Texas blitzed Jones from his safety position. The score also came one play after UT cornerback Kris Boyd dropped an interception.

After the tricky touchdown toss by Jones, Texas trailed 24-7 but quickly made up ground. Using a no-huddle attack, Texas covered 69 yards over six productive plays and 95 seconds. The fast-paced drive was capped by freshman Keaontay Ingram, whose first touchdown at Texas will go down as a five-yard run. Ingram’s touchdown set up a scoring spurt for Texas, which closed out the half with a safety and an end-zone catch by Collin Johnson. The Longhorns, however, failed to tie the game at 24 when Ehlinger threw incomplete on a two-point conversion with 17 seconds remaining.

Texas grabbed its first lead of the game when Kyle Porter plowed into the end zone in the third quarter, but the UT defense could not make that 29-24 advantage stand. Maryland pieced together a 75-yard, 11-play drive, and Tayon Fleet-Davis scored on a 17-yard run on the third snap of the final quarter. On a 3rd-and-3 attempt, Fleet-Davis broke tackle attempts by Jeffrey McCulloch and Boyd and then beat two Longhorns to the goal line. Texas had a lot of time to think about that touchdown drive. Before the Terrapins could kick to the Longhorns, an 86-minute weather delay was called.

Down by five points after Maryland hit a fourth-quarter field goal, Texas had three straight possessions thwarted by two Ehlinger interceptions and a lost fumble by running back Tre Watson. Texas drove 34 yards on its final possession and converted a 4th-and-6 on its journey to the Maryland 33. But on a third-down attempt, Ehlinger sailed a throw to an improvising Lil’Jordan Humphrey and Antoine Brooks’ acrobatic interception ended UT’s hopes of a comeback. Last year, Ehlinger had late turnovers doom Texas in close losses to USC, Oklahoma State and Texas Tech.

Texas turns the football over on three straight drives and that will do it for the Longhorns. #HookEm pic.twitter.com/ppT2Vwd1qP

Well-worn path: Texas starts 0-1 again as Longhorns ‘know the difficulties that lie ahead of us’