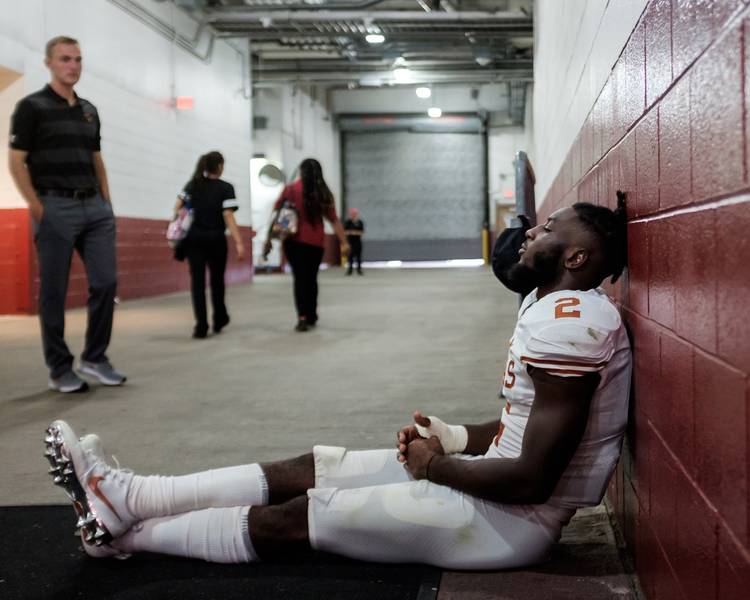 Texas cornerback Kris Boyd (2) sits in the tunnel durning the rain delay at FedexField on September 1, 2018 in Landover, MD. (Photo by Michael A. McCoy for the American-Statesman

Thousands were spent so fans to travel to Salt Lake City, Chicago, Los Angeles and Washington in recent years to watch their Longhorns. Alas, every fun journey ended with a three- or four-hour disaster.

So it goes again last Saturday at FedEx Field, just outside the nation’s capitol.

Texas coach Tom Herman looked shell-shocked after Maryland’s 34-29 victory in the season opener. It’s the second straight year the Longhorns (0-1) have lost to this lower-level Big Ten program. Last season’s loss in the opener set UT on a path to 7-6.

Few will predict Texas to have any serious problems against Tulsa (1-0) in Saturday’s home opener at Royal-Memorial Stadium. But not many thought the Horns would struggle as two-touchdown favorites against the Terrapins, either.

Maybe the 2020 trip to LSU will be better. Start saving now.

“We know the task at hand, we know the difficulties that lie ahead of us,” Herman said. “We know how much better we are now than we were probably at any point last year. We didn’t show it in the first and fourth quarter.”

Whether he likes it or not, Herman is now tracking the same path as former coach Charlie Strong.

Strong went 6-7 in his first season in 2014, then lost the 2015 opener at Notre Dame. Strong didn’t panic then, but he owned it. “It’s always a shock when you go out and just go get embarrassed,” the coach said that night at Notre Dame Stadium after a 38-3 meltdown. A 5-7 season ensued.

Strong didn’t panic then, and Herman likely won’t now. Both coaches flew home with the same mission — block out the noise and focus on improvements.

“My anger level is at myself,” Herman said. “I’m not angry at our players. I thought they played really hard. We have to find a way as coaches to make sure they play smarter.”

Herman will face more questions about the quarterback, the rotation at running back and the defensive miscues this upcoming week. All are valid.

Is quarterback Sam Ehlinger truly a difference-maker? The sophomore is now responsible for key turnovers in four game-deciding moments. He’s also now 2-5 as a starter.

“I think my own play was kind of embodied in how the whole team did,” Ehlinger said after throwing two interceptions on UT’s final three drives. “Started kind of slow. Middle of the game, picked it up. Kind of found our stride, and then obviously in the end, would have liked to finish better in moving the offense better.”

Texas averaged 0.78 yards on 14 of the first 15 plays against Maryland. Business picked up midway through the second quarter when Ehlinger quickened the tempo. He connected with Collin Johnson twice, once for a 22-yard touchdown pass and then a 33-yarder to set up another score.

“As the game progressed, we ran the ball pretty well and I think our uptempo was well executed,” tight end Andrew Beck said. “Obviously, there are things to improve, but I think that’s a pretty good place to start for us.”

The running game started to click midway through. Freshman Keaontay Ingram averaged 6.2 yards on six carries. That included an impressive 18-yard run and then a 5-yard score. But Ingram didn’t get a single carry after halftime.

Graduate transfer Tre Watson finished the game with a team-high 12 attempts for 52 yards.

“We thought Tre Watson was running really well, so we went with the hot hand,” Herman said. The coach considered the tight score, and “I felt like the fifth-year senior who was playing at the time was the right guy to have in there.”

Defensive coordinator Todd Orlando will be fuming over his unit’s missed chances. Herman does not allow coordinators to talk with reporters after games, only on Wednesdays.

Maryland interim coach Matt Canada was the only one riding a hot hand. Jones ran for a touchdown, caught another one and threw for a third score on the first three touches of his collegiate career against Texas.

UT veterans Charles Omenihu, Davante Davis and Gary Johnson all committed key penalties on a drive that bridged the first and second quarters. That ended with a Maryland field goal.

“Controlled violence. Being smart, especially on mine,” said Omenihu, who was flagged for roughing the quarterback. “Getting to the quarterback is my duty. I have to know when in space the opportunities are there to take it.”

Boyd was also called for pass interference in the fourth quarter. Freshman B.J. Foster got flagged for roughing the quarterback. Those two penalties fueled Maryland’s drive that ended with an 18-yard field goal. The Terps had a 34-29 lead, which forced the Horns and Ehlinger to be aggressive down the stretch.

Texas finished with 10 penalties for 102 yards.

Herman pointed out that he’d rather have players making aggressive penalties (like a roughing or pass interference) rather than administrative ones (like jumping offside). Collin Johnson was flagged five yards on UT’s opening drive for not having his knees covered, which is a new NCAA protective rule this season.

“I would rather have to pull the leash a little bit than have to kick them in the butt,” Herman said.

Chances are, Herman will be kicking his players’ tails this week about all sorts of things.

“Obviously losing doesn’t feel great, but I think we can learn from it and all of our goals are still on the table,” Ehlinger said.