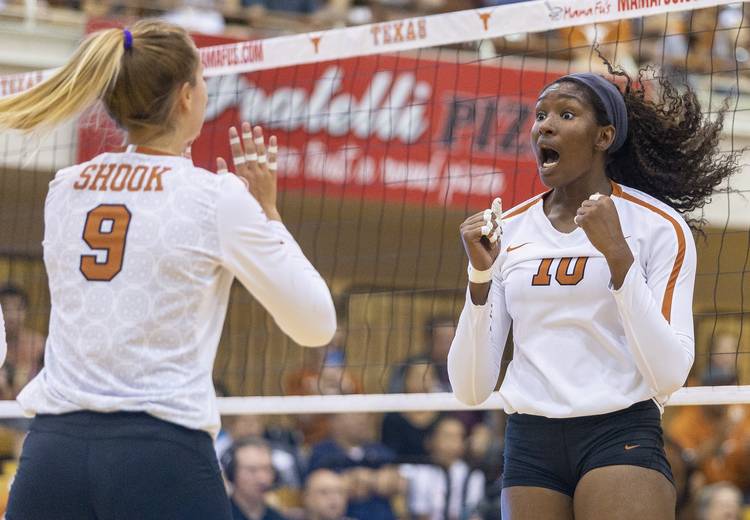 After having traveled twice to the Midwest in the first two weeks of the volleyball season, Texas is ready for some time at home.

The sixth-ranked Longhorns (3-1) host Texas State on Thursday and then 16th-ranked Kentucky on Friday at Gregory Gym. They’re Texas’ first home matches of the season after having spent the first two weekends at tournaments in Nebraska and Wisconsin.

“As I always say, this is the best place to play in college,” senior middle blocker Morgan Johnson said. “So, coming out here and playing in front of our fans, just to get that ball rolling is going to be awesome for us.”

The Longhorns have only three non-conference matches on their 2018 home schedule, in part because of Texas’ commitment to the early-season VERT Challenge tournament that rotates locations (Texas hosted it in 2015). No Big 12 team will host fewer non-conference matches; Baylor and TCU both have seven before Big 12 play begins.

Still, UT season-ticket holders should still get some bang for their buck. Texas State (5-3) is picked to win the Sun Belt title. And Kentucky (3-3) was a 29-win team in 2017; the Wildcats opened this season with three straight losses but are now tied with San Diego at No. 16 in the AVCA poll. And fourth-ranked Stanford (4-1), which travels to Austin next week as part of a Tuesday/Friday home-and-home series, opened the year as the nation’s top-ranked team.

“Those are all really good RPI teams,” UT coach Jerritt Elliott said. “Texas State is much-improved than it’s been in the last few years; we’ve got a lot of respect for them. Kentucky was a top-four seed last year. Obviously, Stanford speaks for itself.”

Congratulations are in order for a few Longhorns who have been named to the VERT Challenge All-Tournament Team:@18petesydn @CayaW

Texas had wins over ranked teams in Oregon and Florida, but No. 2 Wisconsin dealt the Longhorns a four-set loss last weekend. Junior outside hitter Micaya White and freshman libero Sydney Petersen have earned all-tournament accolades, and Johnson was the Big 12’s defensive player of the week after an 11-block performance against Florida on Aug. 25.

White and Johnson have been part of the volleyball program since 2015, but the Longhorns have spent part of this season introducing a handful of fresh faces to the lineup. Texas has started at least three freshmen in two of its first four matches, and Petersen — who as the libero does not technically amass starts — is averaging 3.81 digs per set. Redshirt freshman middle blocker Brionne Butler joined White and Petersen on the all-tournament team in last week’s Wisconsin tournament.

“We’ve had a lot of freshmen in the lineup and I’ve been very pleased with the way they’ve approached the game,” Elliott said. “I think the way they’ve played and they’ve performed has given a lot of confidence to the upperclassmen as well.”

The Dotted Line: A look back at the impact made by Texas’ lowest-ranked recruits this decade

Texas’ notable number: The Longhorns, the NCAA’s targeting rule — and the number 6