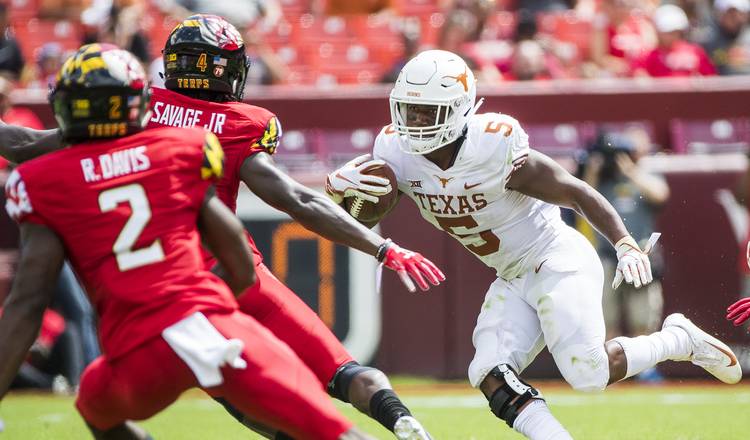 Texas running back Tre Watson (5) looks for room against Maryland at FedEx Field, in Landover,Md., on Sept. 1 , 2018. RICARDO B. BRAZZIELL / AMERICAN-STATESMAN

So far, Tre Watson has had nothing but good memories at Royal-Memorial Stadium.

Watson, of course, has yet to play for the Longhorns there. The graduate transfer running back made his Texas debut last week in the 34-29 season-opening loss at Maryland. But back in 2015, Watson had nine carries for 37 yards in Cal’s 45-44 win in Austin.

Watson isn’t focusing too much on that win, though. He side-stepped a question this week about his memories of Nick Rose missing that extra point. He praised the DKR atmosphere by an announced crowd of 91,658. He insists he isn’t one to brag about that win to new teammates Jerrod Heard, Patrick Vahe, Andrew Beck and John Burt, all of whom started for the Longhorns that night.

On Saturday, Watson will be back at DKR, this time as a good guy. He had 12 carries for 52 yards and caught a pass in his Longhorns debut last week.

His first carry at FedEx Field was a 3-yard run. That may seem to be a pedestrian gain, but Watson described it as a “blessing.” It came 357 days after he suffered torn ACL and MCL injuries in his right knee on two separate plays against Weber State. They cost Watson his senior season, but because they occurred in Cal’s second game, the timing preserved his final year of eligibility. The 5-11, 195-pound back went back home to Corona, Calif. to rehab.

In May, he picked Texas over LSU and Texas Tech.

Watson arrived in Austin this summer and opened UT’s fall camp in a non-contact jersey. Less than four weeks later, he started and led the team in rushing attempts.

“Texas has done a great job of monitoring my injury,” Watson said. “It took a little bit, but I built confidence and the team built me up. I felt like I was ready to go out there the first week and compete.”

Watson had some rust to shake off against the Terrapins. He lost a critical fumble at the end of a third-down conversion catch on Texas’ next-to-last drive. And offensive coordinator Tim Beck pointed out that Watson’s failure in pass protection led to the first of two Sam Ehlinger interceptions, on the drive preceding his fumble.

Overall, though, Beck said “I thought he played a good game for us. I was pleased for his first game in over a year.”

Watson ran for 1,390 yards and eight touchdowns in his four-year career at Cal. He also returned kicks for the Golden Bears and had five touchdown catches. Watson says his experience is his biggest asset. One of seven scholarship running backs on UT’s roster, he has already made an impression on his younger teammates.

“The experience from Tre, the different things he’s been through, learned about — we can all bring it together to help everybody with what they lack,” said sophomore running back Daniel Young.

Watson is studying social work at Texas. He aspires to be an athletic director, and he joked with reporters this week that he has his eye on Chris Del Conte’s current gig. On Saturday, however, fans will find him on the field instead of Bevo Boulevard.

“Man, I can’t wait to run out of this tunnel,” Watson said. “I came here for the spring game and saw the amount of fans that were there. That’s like the home games that we have at my other school. Coming here and knowing that we’re going to play a home game here, and the fans and it’s a night game, I can’t wait. It’s going to be a blessing to experience this.”