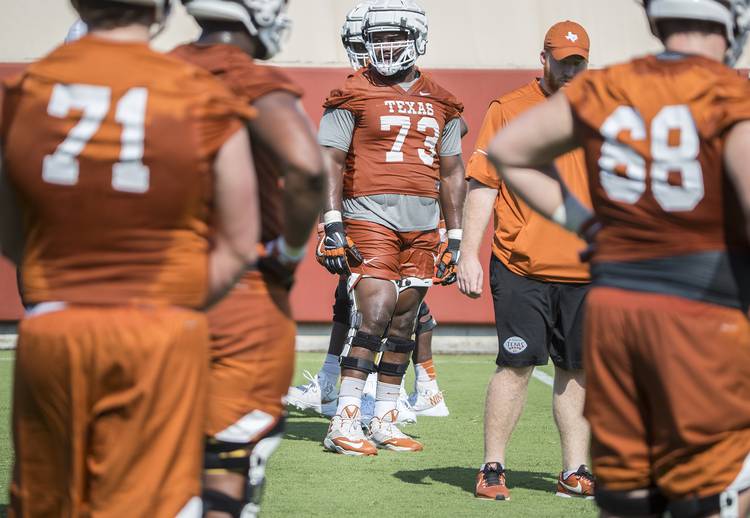 Texas guard Patrick Hudson looks on as the Longhorns run through drills during a practice on Aug. 2, 2018. RICARDO B. BRAZZIELL / AMERICAN-STATESMAN

Texas guard Patrick Hudson had to be rushed to the hospital on Wednesday after team trainers could not get his body temperature back to normal levels during the afternoon workout, coach Tom Herman said.

Hudson, who has been bothered by cramping issues in the past, was treated in the intensive care unit and remains in the hospital. The sophomore from Silsbee will miss this week’s game against Tulsa while undergoing further evaluation for the heat-related illness.

Herman initially said Hudson suffered a “full body cramp” in what was the program’s first acknowledgement of the situation one day after the fact. In a statement, UT trainer Anthony Pass said Hudson’s body temperature was rising and the medical staff took over.

“We immediately went into our exertional heat illness protocol, which included cold water immersion in order to get his temperature down and to transport him to the hospital for further care,” Pass said in a statement. “Patrick remains in the hospital and his condition continues to improve.”

Heat-related issues were front and center in August as Texas prepared to face Maryland, a team that had a player die in June. Offensive lineman Jordan McNair died after being unable to recover from a workout. Maryland officials would later acknowledge there were serious lapses in his medical care.

As for Hudson, Herman said, “Sent him to the hospital, the doctors there got his temperature back down to normal. Then, all of the tests are to try to figure out why he got a heat illness when nobody else did.”

That wasn’t the only bad news on the injury front.

“We planned for this situation,” Herman said. “Elijah has taken a ton of center reps, not just in training camp but even all the way back to spring practice. He stepped right in on Tuesday when Shack went down and practiced there all day yesterday and today. He felt good.”

Safety Brandon Jones (ankle) will also miss this week’s game, but cornerbacks Davante Davis and Kris Boyd are both expected to play.

Herman did say linebacker Ayodele Adeoye, who suffered a knee injury in training camp, has been cleared to return.

Pump up the volume: Texas fans better buckle up on kickoffs. The Horns plan on playing Metallica’s “Seek and Destroy” to get the crowd and the kickoff coverage unit pumped up this season.

“It’s our thing,” Herman said. “It’s a pretty powerful song, ‘Seek and Destroy.’ That’s what the kickoff team is supposed to do, seek out the returner and go tackle him.”

Nike advertising: In October 2015, Texas officials agreed to a 15-year contract with Nike for approximately $250 million. The Longhorns are one of the company’s most high-profile clients.

Now, the shoe maker has come under attack for its new advertising campaign featuring Colin Kaepernick.

Herman said he has only one real guideline for his players when they post on social media or talk to reporters. “Be yourself and be smart,” he said.

From foe to friend: Ex-Cal running back Tre Watson ready for his first home game at Texas

With No. 16 Kentucky on deck, No. 6 Texas sweeps Texas State in its home opener