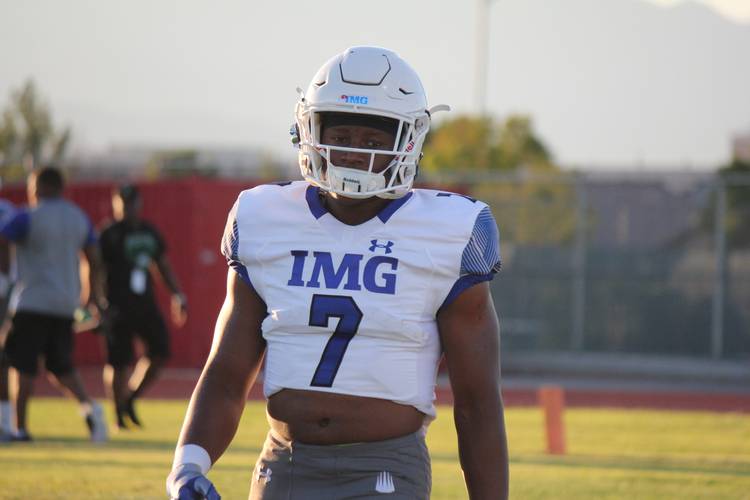 LAS VEGAS — Noah Cain isn’t worried about wins or losses. The four-star running back won’t pick a college based on distance. The Baton Rouge native moved to Denton in elementary school and then to IMG Academy in Florida after an all-state season at Denton Guyer. Now one of the top running back recruits in the nation, Cain is worried about fit.

Six schools are standing out, including Texas. Tom Herman made Cain a priority in the 2019 class as soon as he became the head coach of the Longhorns. The loss to Maryland won’t determine where Cain ends up. Losses happen. Football players understand this better than fans. The 5-10, 212-pound prospect does have concerns about the Texas program, but it’s not the scoreboard.

“It’s more about getting the offensive line together. That’s been the knock on Texas for a minute,” Cain said after IMG Academy beat Liberty (Nev.) in the opening game of the Polynesian Classic, which included four games over two days. Cain scored a rushing touchdown in the 35-0 victory. “As a running back, you need an offensive line. Texas is right there. They just need a few more pieces on the offensive line to take advantage of the talent.”

Texas is among schools like Oklahoma, LSU, Penn State, Auburn, Ohio State. Cain is enjoying his time at IMG Academy, a select high school program with a notorious reputation in Texas. He was a second-team all-state selection as a sophomore at Guyer. He was the District 6-5A offensive newcomer of the year as a freshman, earning MaxPreps freshman All-American honors.

Cain knew a move to IMG would lessen his carries and numbers because Trey Sanders, the top-rated running back in the 2019 class, was there to share the backfield.

“We sacrificed a normal high school career to travel around and play the best teams from different states. I wouldn’t get to go to these places and gain these experiences at home,” he said. “I would rush for 2,000 yards a season and get 25 carries a game at Denton Guyer, but we are looking at the bigger picture. Our bodies will be healthier and fresher in college.”

It’s also about competition. Cain and Sanders push each other in practice. Both prospects remain uncommitted and hold offers from Texas. Cain talks like a player more likely to take a serious look at the Longhorns than Sanders despite the duo discussing the possibility of joining forces in college. It all comes down to fit, for both players. Just like the decision to leave home to attend IMG.

“For me, it was about preparing for college. I could practice against the best players in the country and see where I stood,” he said. “We also live in a college atmosphere with our class work and all that. I know nothing will faze me when I pick a school. I’ve already gone through that adjustment period most kids face as freshman in college.”

Cain won’t pick a school until December. He was at The Opening Finals and will take part in the Under Armour All-America Game in January. He’ll take an official visit to Auburn on Oct. 13. He’s been on the UT campus several times and plans on making another trip  before picking a school.

“I’m willing to take my time and the coaches at the schools I’m interested in know and respect that because it was always what I said I would do,” Cain said. “A lot will go into the decision and I’ll be doing my homework all season. The longer I wait the more information I have when I make an announcement.”