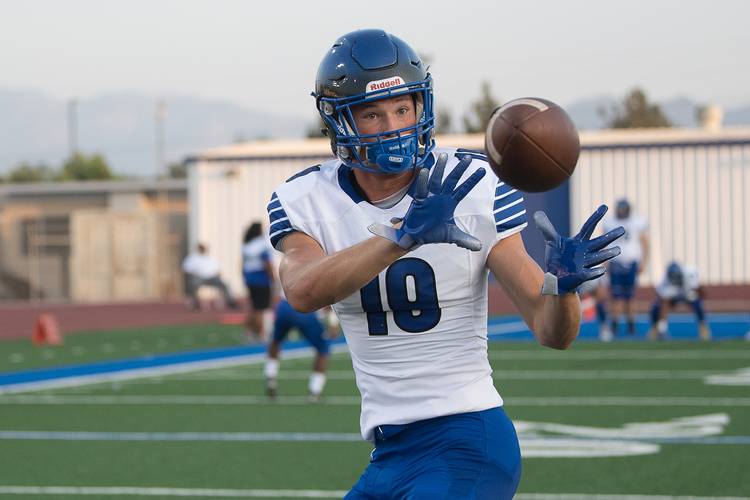 LAS VEGAS — Texas commit Brayden Liebrock is used to travel. He grew up as a select baseball player and his senior season at Chandler High in Arizona must feel like a travel team. Liebrock and his teammates, improved to 3-1 on Saturday with a 35-21 victory over Faith Lutheran (Nev.) during the two-day Polynesian Classic in Las Vegas. It was the third state that Chandler has played in this season, along with California and its home state of Arizona.

Liebrock isn’t done traveling, though. The four-star tight end will be in attendance for the USC game this weekend in Austin.

He committed shortly after visiting in May. He earned an offer on May 4 and committed on May 8. The 6-5, 220-pound prospect entered the game with Faith Lutheran with 63 yards receiving on the season. He ended it with 68 yards in the contest and with his first touchdown catch of the year.

“I fell in love on my official (visit),” Liebrock said. “I felt the most comfortable. I took my official to Arizona State right before that official to Texas, so I knew it was home.”

He lives just minutes from Arizona State, but added, “I am 1,000-percent committed. I’m all Texas.”

Liebrock said he’s encouraged by how much Tom Herman wants to use the tight ends in the offense and sees an opening with Andrew Beck graduating after this season and no one except for Cade Brewer with proven minutes waiting in the wings. Liebrock knows he needs to improve as a blocker, and that should come with added time in the weight room. He can provide an instant threat as a wide receiver.

“I talk to coach (Derek) Warehime three times a week. He tells me to go there and ball out,” he said. “I’m super excited to attend a game in person and see how the team plays.”

Never say a loss can’t result in a net gain. The Aggies proved perception reigns in recruiting when Jimbo Fisher’s program picked up a pair of commitments from elite in-state prospects in the 2020 class hours after losing to No. 2-ranked Clemson.

Texas A&M has its quarterback in the cycle, landing four-star Malik Hornsby from Fort Bend Marshall. He and Texas pledge Hudson Card are in a battle for top quarterback in the state for 2020. Texas offered both players, gaining a pledge from Card, who plays at Lake Travis, early. That meant Texas A&M could put the full-court press on Hornsby.

The other commitment hurt Texas because of need. The Longhorns had its quarterback and won’t sweat the loss of Hornsby too much. But it will feel the impact of losing out on five-star wide receiver Demond Demas, who also committed to A&M after the Clemson loss. Demas is the No. 2-ranked player on the Next 25. He was the top target at wide receiver for every program in the state for the 2020 class. Texas felt good about its position considering Demas’ teammate, Javonne Shepherd, is committed to the Longhorns for 2019.

Nearly 16 months remain before players can sign a national letter of intent for 2020, so don’t write off Herman’s program, especially when it comes to Demas. The two talked about attending the same school a lot before Shepherd picked Texas over A&M, leading most to believe Demas would eventually follow suit. That means either the two changed their minds and are fine playing on different teams in college or that movement is still possible, whether it be a de-commitment from Shepherd from Texas or Demas from Texas A&M.