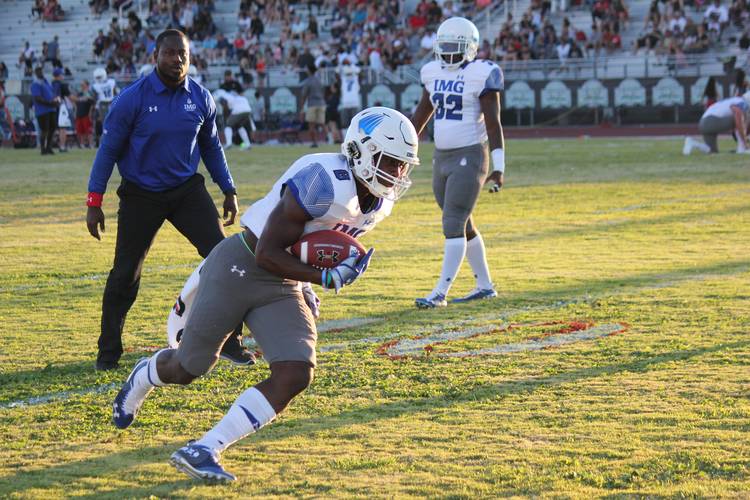 IMG Academy (Fla.) running back Trey Sanders is the No. 1 rated player at his position in the 2019 cycle. (Mike Craven)

LAS VEGAS — Noah Cain isn’t the only IMG Academy (Fla.) running back who has an offer from Texas. His teammate, Trey Sanders, is the nation’s top-rated running back. The 6-foot, 214-pound prospect splits time in the IMG backfield with Cain, and has added another dimension to his game by lining up at slot receiver when Cain’s at tailback. The duo helped IMG beat Faith Lutheran (Nev.) last Friday during the Polynesian Classic.

“I’m looking at the NFL and know running backs need to catch out of the backfield. Showing I can line up in the slot and be a receiver only adds to my skill set,” Sanders said after the win. “Noah and I will get our touches. We’re not worried about who is the star who gets the most yards. The running back position is hard on your body and we’re keeping some mileage off our body by not carrying the ball 30 times a game.”

Sanders is a low-key recruit. He doesn’t do a ton of interviews, and when he does, the five-star speaks glowingly of each program on his offer list. That makes him hard to read, but most recruiting pundits have Alabama as the early leader with Florida, Miami, Auburn and others on the board. The Longhorns are among that mix and are considered a dark horse to land the No. 7-ranked overall player in the 2019 cycle.

“Texas’ pitch is the same,” Sanders said. “They were upset about the loss to Maryland, but coach (Tom) Herman and that staff know what they’re doing, and Texas will back soon. I love Austin and that coaching staff. It is a school still on my radar.”

IMG Academy is essentially a high school all-star team. Both Sanders and Cain arrived at the program before the 2017 season. The sophomores assumed it would be an all-out war for snaps. Sanders even admitted he was hesitant about the situation when he first arrived. Those fears were erased when the duo formed a strong bond on and off the field, even going so far as to say they’ve thought about signing with the same school.

“I’m not going to lie, I thought there would be tension between the two of us when we got here because we were going to battle for the same spot. Instead, it’s become more of a brotherhood. We push each other and help each other every day,” Sanders said. “We want the best for each other, whether we end up at the same college or not. We’ll always be brothers.”

The Longhorns need more talent at wide receiver in the 2019 class after having suffered a few recruiting losses at the position. The first big blow was when five-star Lake Travis wide receiver Garrett Wilson chose Ohio State over Texas. The next one happened when West Mesquite target Dylan Wright pledged to Texas A&M. That has forced the Longhorns to go outside the state for prospects. Jake Smith (Ariz.) and Demariyon Houston (Okla.) are already in fold. Texas plans to host a duo of star wideouts for the USC game.

Marcus Washington, a four-star from Trinity Catholic in Missouri is one of the visitors. The 6-2, 191-pound playmaker was set to commit to Ohio State before the Urban Meyer fiasco took place. That’s given programs like Missouri, Nebraska and Texas a chance. The Longhorns’ three current wide receiver commits are quicker, slot receivers. Washington would provide the class with a true outside receiver who can threaten vertically.

Listed as an athlete, Bru McCoy is a big-bodied wide receiver who can play on the outside or even as a flex tight end. Some colleges and scouts view his best position as outside linebacker, but McCoy wants a chance to play offense most of the time, though he’s talked to Texas about playing linebacker in certain situations. The interesting part of McCoy’s visit is that USC is considered the favorite. A win for the Longhorns could carry more weight than the average win on a recruiting trip.

Texas also will host Derrian Brown, a four-star running back from Georgia. The Longhorns are the favorite leading into the trip and a commitment by the end of the weekend isn’t out of the question. Running back is the only position Texas has yet to gain a commitment at in the cycle. Elijah Higgins, a four-star wide receiver from Austin Bowie, is also expected at the game.