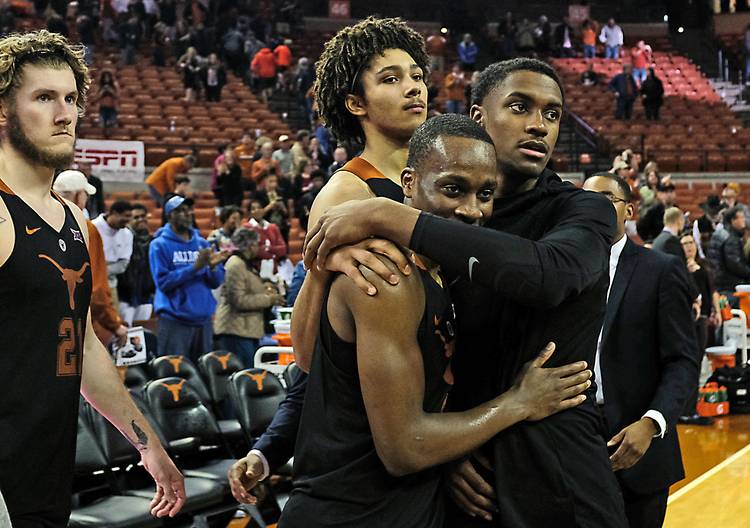 Texas Matt Coleman, (2) gets a hug from Jase Febres, (13) as Dylan Osetkowski, (21) and Jericho Sims, (20) walk on to the court after defeating Tennessee State during an NCAA college basketball game, Monday Dec.18,2017, in AUSTIN, Texas. Texas defeated Tennessee State 47-46 on a game winning shot by Matt Coleman, (2). (AUSTIN AMERICAN-STATESMAN For/ Rodolfo Gonzalez)

In just a few weeks college basketball teams will kick off the season with a slew of official practices. With classes beginning, the rosters are pretty much set for most teams  and earlier this month the Big 12 released the conference schedule.

With about two months until Nov. 6 openers, here are 12 big things about Big 12 basketball.

12. Predicting how the Big 12 poll will look

The conference, according to ESPN, has the strongest Basketball Power Index (BPI) entering the season with half the league rated in the top 25.

Whether that is actually the case or not is another question, but it’s a good indicator of how good this conference could be in 2017-2018. So how will coaches view the league? At  Big 12 Media Day later this fall they’ll release their preseason poll and based on the past and what we know about each team, here’s how I predict coaches will vote:

Kansas will get nine first-place votes and Kansas coach Bill Self will vote for the same team he voted for last season, West Virginia, No. 1. The Mountaineers will edge out Kansas State for the second spot because of Self’s vote. Kansas State and West Virginia will be the two greatest challengers to Kansas’ quest for a 15th ridiculous straight conference title.

Texas Tech will get a bump in the voting because of how good they were last year and the pieces they have back, but Iowa State could be the better team come March.

As for the bottom, Baylor and Oklahoma State are more mysterious than miserable. Both teams could surprise, but they would have to have a lot of things go right for it to happen.

11. The biggest talk over the next two months will be?

Kansas soaks up so much oxygen every preseason, and the talk this year will be about how the Jayhawks are a throwback Bill Self team with an endless list of talented bigs and one of three teams entering the season with the best chance to win the whole thing.

But the second story? Andrew Jones will be a talking point over the next few months. No one should expect him to play just weeks after finishing chemotherapy for leukemia, but:

Andrew Jones is on the roster and in the team picture for the 2018-19 season. https://t.co/VxHPYUluJG

If Jones plays just one minute of basketball this season it would be one of the best stories of the season.

A glance at the rosters and schedules of each Big 12 team:

Roster positives: Don’t sleep on junior Lindy Waters becoming one of the better guards in the league. He’s a tough player who has seen a lot of minutes – starting 31 of 35 games last year. He and Cameron McGriff should be the motors on this team, with McGriff (8.4 points, 5.4 rebounds and 36.8 percent from 3-point) likely emerging as the go-to guy.

Roster note: Indiana transfer Curtis Jones came to OSU in January and will be eligible after the fall semester.

Schedule outlook: They should be entering league play with a winning record, with Nebraska and Minnesota being the toughest non-conference games. Wins over Iowa State in the Big 12 opener in Stillwater followed by a Bedlam game in Norman and a home game against Texas give the Cowboys a chance for a good start in the league. OSU owned Kansas last season, but it won’t have to worry about KU until Feb. 9, the 10th game of the Big 12 schedule.

Roster positives:  Like OSU, Baylor returns a tough, experienced guard in Jake Lindsey. A senior who averaged 23.4 minutes a game last season will likely step into the starting point guard role after backing up Manu Lecomte the last few seasons. But the guy likely to be the difference between Baylor being a tournament team and not is Mark Vital. A 6-foot-5-inch, 230 pound guard/forward averaged 6.7 points and 5.6 rebounds in his redshirt freshman season last year. Lindsey, Vital and senior guard King McClure (8.1 ppg in 2017-2018) give Baylor an interesting big three.

Roster note: Don’t be surprised if former Westlake forward Matthew Mayer sees a lot of playing time. The freshman is 6-foot-9-inches tall, tied for the second tallest on the team, and is listed as a guard and forward.

Schedule: Like most of the Big 12 schools, they should enter league play with a winning record. They have a tough opener with TCU on the road but get Kansas in Big 12 game No. 3 at home. With chances for wins over two-possible AP top 25 teams in their first three league games, Baylor could totally make a lot of people (including me) look dumb for doubting them.

Roster positives: There is a lot of experience on the roster and the team is talented with multiple potential all-league players, like Jamuni McNeace, Brady Manek and Kristian Doolittle.

Roster note: They won’t be a squad living in the AP Top 25, but they’ll be better than some think. Sure players will need to prove they can win without a high-volume scorer like Trae Young and Buddy Hield, but if the point guard transfers they have coming into the program can lead the offense, OU could be a very good team.

Schedule: A decent non-conference schedule will toughen the Sooners up for the Big 12 opener in Lawrence on Jan.2. The next game they host Oklahoma State, meaning a big first week for OU.

The first of my tournament locks

Roster positives: Lindell Wigginton is a Big 12 Player of the Year candidate. He and the rest of the backcourt could be very good.

Roster note: Michael Jacobson, a Nebraska transfer, and Marial Shayok, a Virginia transfer, give Iowa State two players who combined to start 45 games at their previous Power 5 schools. They will contribute right away.

Schedule: Iowa State gets a chance to send a national message on Jan. 5 at home when they host Kansas. The Cyclones also get Kansas State, West Virginia and Texas at home in the first half of Big 12 play, which obviously means they’ll need to play well on the road in February and early March.

Roster positives: Jarrett Culver could be a preseason All-Big 12 player. Norense Odiase and Brandon Francis were also key contributors from last season who return to Lubbock.

Roster note:  One of the best recruits to ever arrive in Lubbock will be 4-star forward Khavon Moore. He joins St. John’s transfer Tariq Owens. Both could be starters from Day 1 depending how coach Chris Beard decides to play.

Schedule: A few years ago the thought of Texas Tech landing a non-conference neutral-site game against Duke on Dec. 20 in New York would have been a farce, but it’s reality. Tech should enter Big 12 with no more than three losses and that first game is on the road against West Virginia. Tech will get a boon for playing a lot of tough late-season conference games at home, like West Virginia (Feb. 4),  Kansas (Feb. 23) and Texas (March 4).

Roster note: Liddell seems to be getting overlooked because of the additions of 4-star out-of-state recruits Courtney Ramey and Hepa, but the Cibolo Steele product is a 4-star recruit who Texas fans should be every bit as excited to watch.

Schedule: A typically great non-conference schedule gives way to the Big 12 slate on Jan. 2 and that game is on the road against what could be the best Kansas State team ever. It’s a brutal set of opening games with the Wildcats and West Virginia right off the bat. A trip to Kansas also happens in January.

Roster positive: Assuming Jaylen Fisher is healthy after a knee injury ended his season early in 2017-2018, he and Alex Robinson make one of the best backcourts in the league, and Desmond Bane gives them a three-guard line up that other teams (like, uh, Kansas and Villanova) have used to win a lot of games over the last few years.

Roster note: There are a lot of pieces being added to the roster that, collectively, probably means the TCU program has never had this many high-level players eligible to play at the same time. Not only is guard Kaden Archie a highly-regarded recruit, but Lat Mayen, Kevin Samuel, RJ Nembhard and Angus McWilliams – all redshirt freshman – were sought-after players and should contribute. If there’s a darkhorse star in the league that we’re not talking enough about it’s Australian Kouat Noi, who, as a redshirt freshman, averaged 10.2 points and 3.9 rebounds last season in just 22 minutes per game.

Roster positives: What’s not to like? Pretty much every player who contributed to last year’s Elite Eight team is back.

Roster note: Dean Wade and Barry Brown are the best 1-2 punch in the league and both are Big 12 Player of the Year candidates.

Roster positives: If you thought the West Virginia defense was going to go away because of Jevon Carter’s graduation, think again. West Virginia returns many players who played significant minutes and its defense shouldn’t suffer with this roster. New likely starting point guard James Bolden may actually  improve the offense of the Mountaineers.

Roster note: Sagaba Konate enters this season as the odds-on favorite to win national defensive player of the year honors. The big question will be if the 6-foot-8-inch center is going to be more of a threat on offense.

Schedule: Though Florida presents a tough challenge for the Mountaineers, West Virginia ought to have a stellar record entering Big 12 play. Rhode Island and Pitt are starting over and the best mid-major on the schedule is Buffalo. Once they do get to league play they travel to Austin and Kansas State in Games 2 and 3. They do get Kansas at home on Jan. 19, which could very well be a College Game Day contest like last year.

Roster positives: Kansas, likely one of the top three teams in the nation when preseason polls come out in October, has a post-heavy roster with Dedric Lawson entering the season as the most hyped Hawk of the bunch. The Memphis transfer averaged 19.2 points and 9.9 rebounds in his final season at Memphis before he and brother K.J. bolted for KU. They, along with transfer Charlie Moore, joined a top-five recruiting class.

Roster note: Kansas returns one of the preseason Big 12 Player of the Year candidates in Udoka Azubuike, who is also the largest center in the league who led the nation in field goal percentage.

Schedule: It’s not hyperbole to suggest Kansas has the toughest non-conference schedule in the country, not just the league. Kansas plays Michigan State, Villanova, Marquette, either Louisville or Tennessee and mid-major power Vermont along with Arizona State all before Christmas. The challenge game is in Lexington, Ky. The trickiest early conference game is Game No. 2 when Kansas travels Iowa State, whose Hilton Magic should be back to peak spookiness.

Texas vs. USC: A Q&A with a Trojans beat writer