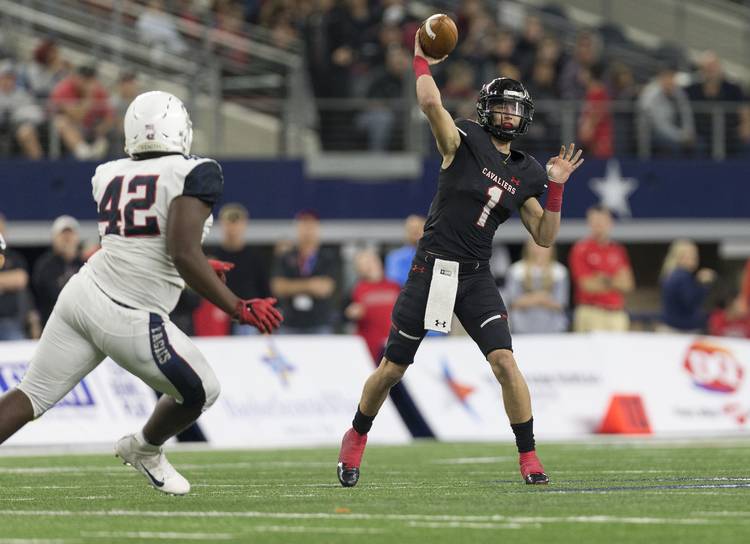 Lake Travis' Hudson Card (1) throws over Allen's Jayden Jernigan (42) in the second half of the high school football Class 6A, Division I final at AT&T Stadium in Arlington, Friday, Dec. 23, 2017. (Stephen Spillman / for AMERICAN-STATESMAN)

It’s week three for the in-state commits. All 15 pledges, including the out-of-state ones, are in action. Many are expected on campus Saturday for the USC game, including several from outside the state. Here is a schedule of the future Longhorns.

Conroe Oak Ridge at The Woodlands

Westlake Village is 4-0. Floyd has scored a touchdown as a punt returner and as a receiver. No defensive statistics are available for the team, though.

Mayfair and Adimora, a four-star safety commit, started the season 3-1 and are set for a showdown with Warren. Adimora stars on both sides of the ball for Mayfair, patrolling the secondary at safety and contributing at wide receiver.

Chandler is on a three-game winning streak entering its second neutral site game of the season. Chandler started with a loss to Centennial (Calif.) in a neutral-site game and just knocked off Faith Lutheran during the Polynesian Classic in Las Vegas.

Jake Smith is off to the hottest start of any UT commit. The future slot receiver plays all over the field for his 4-0 Notre Dame Prep squad. He’s scored 11 of the team’s first 12 touchdowns and added another receiving score in the most recent win.

Watson suffered a minor injury in the game last week and it’s unclear whether the cornerback will play this week.

12 big things about Big 12 basketball: the rosters and schedules are set