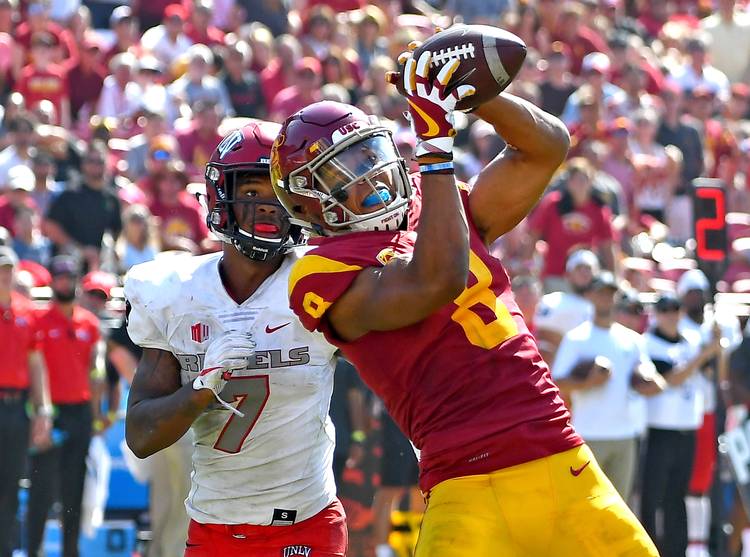 We’re interviewing the beat writer of Texas’ opponent this week. Brady McCollough (@BradyMcCollough) of the Los Angeles Times was gracious enough to offer his insight on the USC Trojans:

How has JT Daniels looked in his first two games as USC’s quarterback?

Like a guy making his first two college starts, which is actually kind of surprising. Because in practice, you can see how good JT Daniels is going to be. He so clearly outshined his competition, Matt Fink and Jack Sears, in camp. Against UNLV, he actually had a really solid day overall and stayed patient when things weren’t coming easy. Against Stanford, they brought a ton of pressure and gave Daniels looks he hadn’t seen. He was a little more tentative with decision-making, which led to some sacks. I assume Todd Orlando will go with the same formula. He’s a coordinator who is meant for a matchup with a young quarterback.

With Ronald Jones II now in the NFL, what kind of production is USC getting in the backfield?

The Trojans thus far have gone with a “three-headed monster” in Aca’Cedric Ware, Stephen Carr and Vavae Malepeia. Clay Helton feels it’s his best unit on the offense thus far. They have been productive, but it hasn’t led to a lot of success finishing drives. At some point, Carr, the natural heir apparent to Jones, should take over a game. But he’s coming off back surgery in the offseason, and Helton has been working him in cautiously.

After allowing a 100-yard rusher in two straight games, are the Trojans concerned about their rushing defense?

I actually don’t think so. Both Lexington Thomas and Bryce Love got to their 100-plus yard days because they each broke one big long run. I’d say that’s the largest concern for the USC defense as a whole — giving up explosive plays that turn the game. Texas should seek those out, taking advantage of USC’s aggressive nature defensively.

They’ve lost to Stanford, but can this USC team rebound and contend for the Pac-12 title?

The Stanford loss was pretty predictable. How USC responds at Texas will be a good indicator of what we can expect from the Trojans in Pac-12 play. USC was predicted to win the South, and while Colorado and Arizona State have notched some nice wins, both those games are in the Coliseum. Arizona and UCLA are struggling. Utah is always tough, of course. I’d put money on USC winning the South and having a rematch with Stanford or a matchup with Washington.

Name one USC player that Texas fans aren’t talking about — but should be.

Amon-ra St. Brown has probably made it onto Texas’ fans radars, but if he hasn’t, he should be on it. He’s JT Daniels’ high-school teammate and has a great connection with him on the field. When things aren’t going well, Daniels looks for him.

I used to cover Kansas for The Kansas City Star so I know Austin well. It’s one of my favorite trips. I haven’t researched what the new best spots are, but I’m a sucker for a stop at Chuy’s for old time’s sake. I definitely will be eating queso at every meal.

12 big things about Big 12 basketball: the rosters and schedules are set