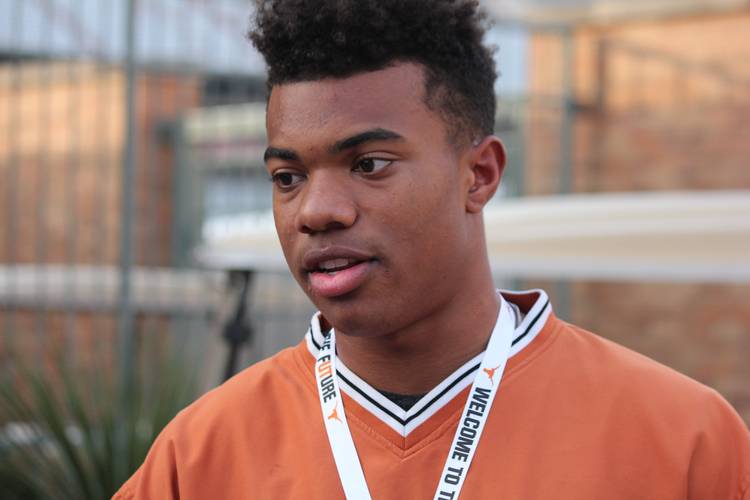 Home games offer programs a chance to earn wins on the field and in recruiting. Texas hopes to do just that this weekend when it hosts USC on the field and dozens of top recruits. The group of visitors will include current 2019 commits like Brayden Liebrock and Marcus Tillman Jr. The 2020 class will also be represented in volume, most notably Zachary Evans, the top player on the Next 25.

The focus on the recruiting trail remains closing out the 2019 class. That includes keeping current commits like Javonne Shepherd, who said he’ll be in town for the USC game on Thursday, and building bonds with the top uncommitted targets remaining on the board. Elite targets are expected to be on campus this weekend. Let’s take a closer look at six of the top visitors in the 2019 class.

The most likely visitor to leave Austin as a commit is Brown. The big, powerful running back says Texas is his favorite and the official to Texas this weekend could close the door on his recruitment. Auburn and Penn State are also in the mix. Running back is the only position the Longhorns don’t hold a commitment at in the 2019 class. Brown would give Tom Herman’s program its 16th commit of the cycle. He’d be the eighth out-of-state pledge in the class.

Brown might become Texas’ first running back commit of the cycle, but that won’t stop the Longhorns from pursuing Sanders, the best player at his position in the class. Sanders is a big, strong running back with breakaway speed and the ability to play slot receiver. He splits time at IMG with Noah Cain, another running back target of Texas, and lines up as a wide receiver when Cain is in the backfield. Sanders is dynamic with the ball and is built to handle a heavy workload. It’ll be hard to convince Sanders to leave the SEC, but an official visit to Austin is a good start. Alabama is considered the favorite.

Texas is looking for a fourth receiver in the 2019 class and Washington is one of the top remaining targets. He was once considered a lock to pledge to Ohio State, but he backed away from his scheduled commitment date this summer when Urban Meyer was suspended three games. That’s allowed programs like Texas and Missouri back in the mix and the Longhorns hope a trip to Austin leaves a lasting impression. Washington is a true outside receiver with great hands, body control and vertical speed.

Higgins is a familiar name to Texas fans by now. He lives minutes from Texas’ campus and included the Longhorns among his top schools throughout the process. Many figured Higgins would already be committed to Texas by this time in the cycle, but the big-bodied receiver is keeping his options open and exploring programs outside the state, specifically Stanford, Ohio State and Florida. Higgins was born in Florida and loves the combination of academics and football offered at Stanford. The prestige of Ohio State has the Buckeyes on the list. Family and proximity are the cards Texas must play to land the Under Armour All-American.

Official to Texas this weekend🤘🏾 pic.twitter.com/L0xiyd4Bs4

McCoy is another wide receiver option and the top-ranked athlete in the 2019 class because he possesses the ability to play wide receiver or outside linebacker in college. The Longhorns want him to play both, focusing mostly on offense while offering the team a third-down linebacker who can blitz and cover wide receivers. USC is his top school right now, so Texas can really make an impression with an impressive victory over the Trojans. He’s also close to Texas commit De’Gabriel Floyd.

The only safety committed to Texas is Chris Adimora, a four-star from California. Expect the Longhorns to sign at least three at safety, including a player like Jalen Catalon who excels as a safety and can become a nickel back. Cine is a true deep safety in the mold of current Texas freshman Caden Sterns. Cine is long and rangy with great football IQ and a penchant for making big plays. He’s a native of Massachusetts and is high on Big 10 programs like Penn State and Michigan.

The Eyes of Texas: Four players to watch in Saturday’s Longhorns-Trojans game