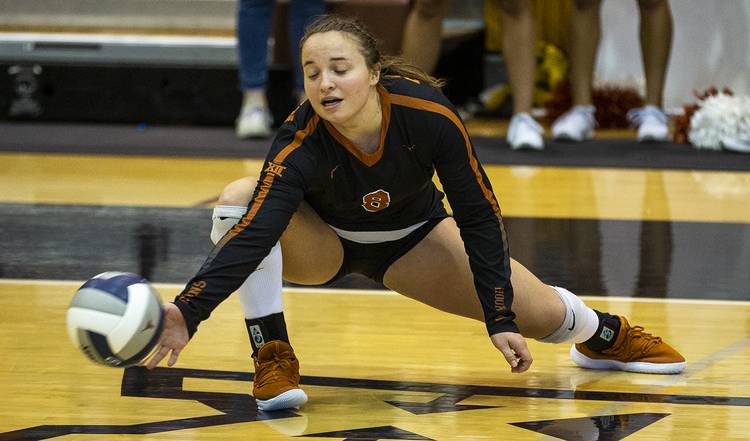 For the second time this week, Stanford exposed some of the flaws on UT’s volleyball team.

Friday’s match at Gregory Gym was played in front of an over-capacity crowd of 4,337.

“I think we have a lot of pieces that once we get them all together, we’re going to be really successful at the end of the season,” freshman Logan Eggleston said. “It’s going to take a lot of hard work. In our practice, we are going to have to work really hard.”

Texas opened the match with thunderous kills by Brionne Butler and Yaazie Bedart-Ghani. Stanford, though, quickly responded with a 7-1 run that featured two aces by Kathryn Plummer. After that stretch, Stanford’s lead never dipped below three points as Texas hit .107, committed four service errors and failed to score more than two straight points.

Texas never led in the second set at the Longhorns continued to struggle on the service line. (Texas served three straight errors on two separate occasions in the set). Texas then held off a Stanford rally in the third set to avoid getting swept in back-to-back matches for the first time since 2011.

Still alive, Texas came out swinging in the fourth set. Stanford coach Kevin Hambly, however, successfully challenged an out call on a Plummer attack. Instead of a 5-5 tie, Stanford led 6-4 and then went on a 6-3 run that UT couldn’t overcome.

“I think Stanford puts a ton of pressure on you and they challenge you both physically and emotionally,” Texas coach Jerritt Elliott said. “I thought they did a good job of just staying steady all night.”

Texas entered the match in a 304th-place tie with Kentucky, Grambling, Iowa and Belmont in aces. It did not add to its season-long total of 30 on Friday night.

Texas committed 17 service errors, its most since a 2016 match against Iowa State. Elliott referred to Texas’ serving as a “virus” in the second set, which featured seven errors. The Longhorns also had 14 service errors in its 3-0 loss at Stanford on Tuesday.

“We need to figure that out,” Elliott said. “It’s tough based on the rotations and what we have.”

Added Eggleston: “I think we are going to go into practice and really put a focus on that. That’s what we really need this season to change our side.”

Texas (5-3) will shift its focus to the start of Big 12 play. The conference’s reigning champion — and its preseason pick to repeat — Texas will travel to Kansas State on Sept. 19.

“I’m actually really confident in this team,” Bedart-Ghani said. “We’ve just got to get back in the gym and keep working at it. Conference is going to challenge us as well.”

The Eyes of Texas: Four players to watch in Saturday’s Longhorns-Trojans game