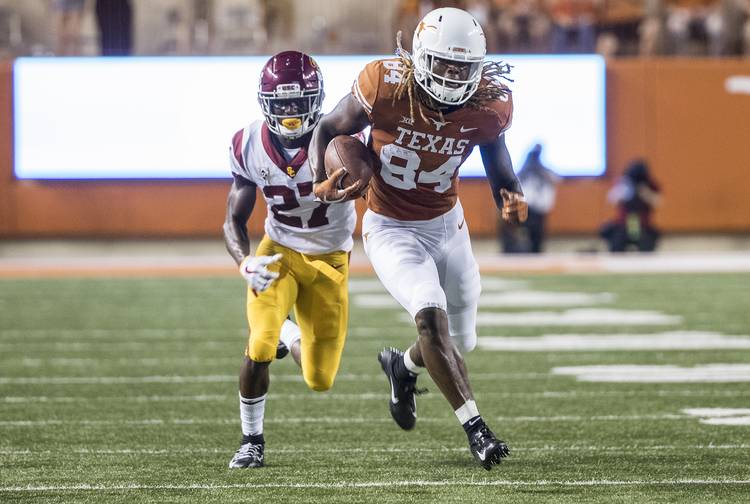 There were 146 snaps taken in Texas’ 37-14 win over No. 22 USC on Saturday night. Here are five that ended up making a big difference:

USC opened the game with the football, and freshman JT Daniels looked the part of a Trojan quarterback on a nine-play, 75-yard scoring drive. Daniels completed 6 of 7 passes before his running game took over near the red zone. On a first-down call, Stephen Carr broke a tackle and sprinted into the end zone for a 23-yard score.

That run would be the highlight of Carr’s night. He lost yardage on three of his five other carries, was stopped for no gain on one attempt and finished with 13 rushing yards. His team left Austin with minus-5 yards on the ground.

2. Catch Lil’Jordan if you can

USC held a 14-3 lead by the end of the first quarter. Texas, though, scored the game’s final 34 points. The spree was started by junior receiver Lil’Jordan Humphrey, who scored on a 47-yard pass with 13 minutes, 23 seconds left in the second quarter.

On his second score of the season, Humphrey received a 6-yard throw from UT quarterback Sam Ehlinger that was good enough for a first down. Humphrey, however, slipped a tackle by USC defensive back Ajene Harris. Picking up a block from teammate Collin Johnson, Humphrey broke free and beat two Trojans to the end zone.

Humphrey finished the game with four catches for 84 yards. Johnson, who torched USC for 191 yards last season, had six catches for 79 yards.

Nursing a 14-13 lead in the first half, USC drove to the Texas 1 before it was stuffed on a third-down rushing attempt. The Trojans were flagged for an illegal formation on the play, but UT coach Tom Herman declined the penalty to set up a showdown on fourth down. USC chose to pitch the ball to Carr, whom Texas safety Brandon Jones ran down for a 2-yard loss.

That play came a season after Texas made a similar stop on a fourth-and-goal play in Los Angeles. Jones has developed a knack for defending the goal line; his hit on West Virginia’s Will Grier in Morgantown last year forced a fumble and injured the quarterback.

“We treat it like it’s fourth-and-inches every down. That showed tonight,” Texas cornerback Kris Boyd said.

Behind two 46-yard field goals, Texas entered halftime with a 16-14 lead. UT began the second half with the football at its 26, and the Longhorns pieced together a 10-play touchdown drive. On the drive’s final play, Ehlinger threw a 27-yard pass that a diving Joshua Moore caught in the end zone.

"JOSHUA MOORE. SAM EHLINGER. PUT THE BISCUIT IN THE BASKET."

Everyone get on Gus Johnson's level. pic.twitter.com/FUmi3Bpuq6

Read more: With his brothers in mind, Yoakum’s Joshua Moore ready to ‘make a name for myself’ at Texas

The touchdown was a first for the 6-foot-1, 170-pound Moore, a four-star freshman from Yoakum. Moore caught the first two passes of his collegiate career during a game-sealing drive in last week’s win over Tulsa.

With ex-UT basketball player Mo Bamba in attendance, Texas freshman Caden Sterns recorded a memorable block of his own Saturday. With 6:25 left in the third quarter, USC sent kicker Chase McGrath out for a 50-yard field goal. McGrath, who kicked two key field goals against UT in Los Angeles last year, would have pulled the Trojans within six points with a successful kick.

Sterns, though, recorded a clear block of the McGrath attempt. Sterns had the first shot at scooping up the football, but it bounced around until it was found by linebacker Anthony Wheeler. The senior captain returned it for a touchdown and a 30-14 Texas lead.

The touchdown was Wheeler’s second in UT’s last four games. He scored on a 38-yard fumble return in last year’s Texas Bowl.

RELATED: Texas 37, USC 14: One winning play leads to another, sparking a 34-point avalanche in Longhorns romp

RELATED: Bohls: Will this win over USC spark a Texas turnaround? It’s a start

RELATED: Golden: Momentum? Fauxmentum? Whatever you call it, Texas had it and needs to build off it

RELATED: What Tom Herman said after Texas bowled over USC 37-14

RELATED: Third and Longhorns: A closer look at Texas’s 37-14 win over USC

After USC demolition, Texas is … 2-1 heading into Big 12 opener against TCU