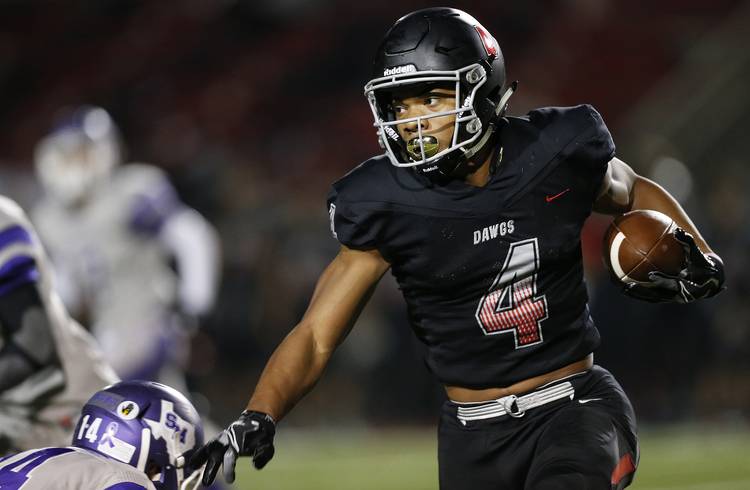 Recruiting is half perception and half reality. Momentum is an illusion on the football field, but it’s as real as the noise was at Royal-Memorial Stadium on Saturday night when Texas claimed its first signature win under Tom Herman with the thumping of USC. The weekend produced more than a win on the field. The Longhorns picked up a commitment from four-star running back Derrian Brown of Buford, Ga.

He was one of many commits and targets on campus for official and unofficial visits. The Longhorns hosted prospects from the 2019, 2020 and 2021 classes. Out-of-state commits like De’Gabriel Floyd, Marcus Tillman Jr. and Brayden Liebrock helped recruit the next batch of targets, including Brown.

“I knew I was going to like Texas, and I love the coaches,” Brown said following his commitment. “The trip and the game exceeded my expectations. It’s hard to put into words. I kind of knew where I was leaning, but the official visit sealed it for me.”

Texas holds 16 commitments for the 2019 class, which is ranked No. 9 in the nation. It entered the weekend ranked 12th before the Brown pledge moved the group back into the top 10. Brown wasn’t the only top 2019 target on campus. The Longhorns hosted official visitors like the top running back in the nation in Trey Sanders and the best athlete in the nation in Bru McCoy. Sources close to both players indicated the pair were blown away on their visits and the Longhorns could now be in the lead for both five-star prospects.

Elijah Higgins, a local wide receiver from Austin Bowie, also was on campus.

“It was great,” the big wide receiver target said Sunday. “It was one of the greatest atmospheres I’ve experienced. I hung out with all the recruits that were there.”

Higgins plans on taking an official visit to Florida on Oct. 6 and said he expects to pick a school “soon” after that visit.

Tom Herman and his program could sell hope to the 2018 class. It was understood that speed bumps would await in his first year. The pressure increased in year two, especially after a loss to Maryland and a lackluster victory over Tulsa. The stadium was packed for USC. The Longhorns were on audition, and the group passed. It was invaluable for a class that is built largely on out-of-state prospects.

“It was huge,” Floyd said. “Guys want to see results and improvement. That was a big step for the team. The fans were awesome.”

The 2021 class also was well represented, specifically on the offensive line. The sophomore offensive linemen in the state that will make up the class could go down as a special group. One of the stars of the group is Hayden Conner of Katy Taylor. The 6-6 tackle was offered by Herman before the game and took in the contest with peers like Bryce Foster, Reuben Fatheree II and Donovan Jackson. The Houston-based offensive line pack calls themselves the Four Horseman.

“The whole night was amazing. It had a complete different feel than my trip last year,” Conner said. “The student section was crazy. I really enjoyed the whole experience, especially the locker room with the offensive line group after the game.”

“Coach Hand is amazing,” Conner said. “What he’s done in such a short period of time is crazy. We talk every few weeks. I can see why his guys love playing for him.”

After USC demolition, Texas is … 2-1 heading into Big 12 opener against TCU