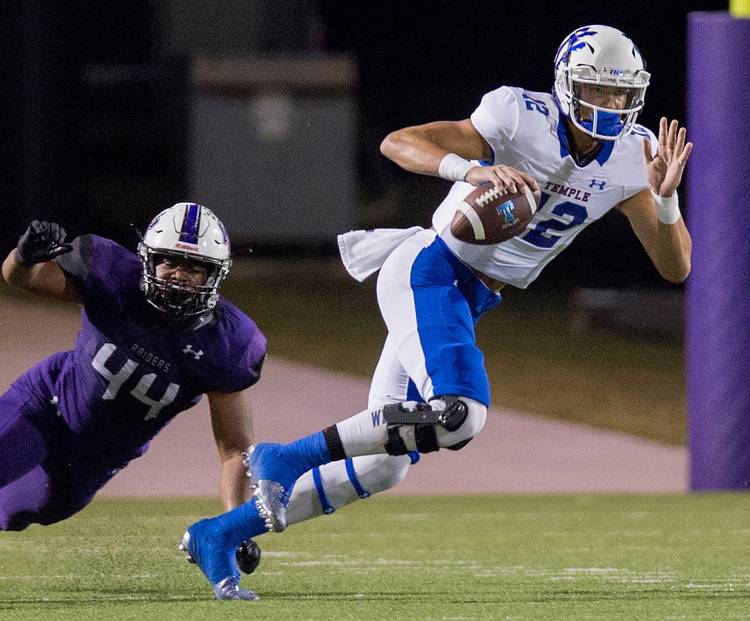 Temple quarterback Jared Wiley hunts for a receiver while being chased during the Wildcats' 21-14 loss to Cedar Ridge in 2017. (Michael Miller/Temple Telegram)

There is one more player to track after Derrian Brown committed to the Longhorns following his official visit to Austin to watch the Texas victory over USC. Texas’ 2019 class now contains 16 members, while the 2020 class still consists of dual-threat quarterback Hudson Card of Lake Travis. The Longhorns hope that number continues to grow as the early signing period in December approaches. Here is the schedule for the 16 current commits in the 2019 class. Texas commits Roschon Johnson and Jordan Whittington are injured. Peter Mpagi is on an off week.

Westlake Village is 5-0. Floyd has scored a touchdown as a punt returner and as a receiver. No defensive statistics are available for the team, though.

Mayfair and Adimora, a four-star safety commit, started the season 4-1 and are set for a showdown with Gahr in a neutral-site game. Adimora stars on both sides of the ball for Mayfair, patrolling the secondary at safety and contributing at wide receiver.

Chandler is on a three-game winning streak entering its second neutral site game of the season. Chandler started with a loss to Centennial (Calif.) in a neutral-site game and just knocked off Faith Lutheran during the Polynesian Classic in Las Vegas.

Jake Smith is off to the hottest start of any UT commit. The future slot receiver plays all over the field for his 5-0 Notre Dame Prep squad. He’s scored 11 of the team’s first 12 touchdowns and added another receiving score in the most recent win.

Watson and his Grayson teammates are 3-1 entering the away game on Friday. Watson has 16 tackles and two forced fumbles in four games.

Jones is 2-1 entering the game against Forest. Defensive stats were not available for Tillman.

Millwood is the defending Class 2A Oklahoma state champions and looks like a team ready to compete after starting the season with a win against Heritage Hall, Oklahoma’s defending 4A state champion. MIllwood beat Douglas 56-0 in Week 2 and Cascia Hall 38-7 in Week 3. No stats were posted.

Texas’ notable number: A positively negative game for the Horns’ run defense — and the number 30