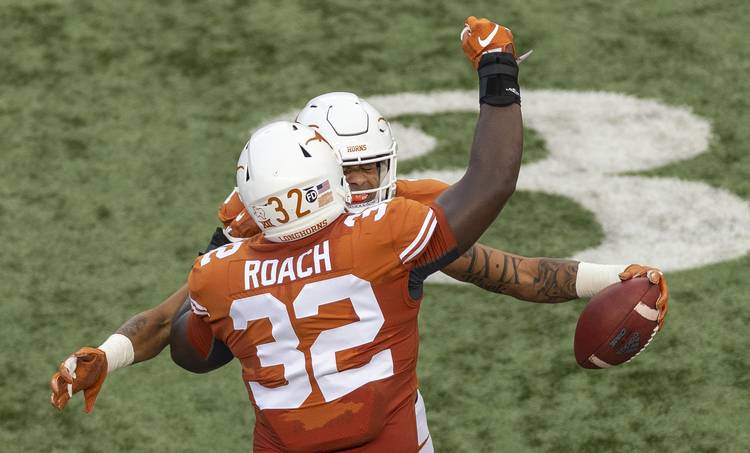 Texas defensive back Caden Sterns (7) celebrates his interception against Tulsa with linebacker Malcolm Roach (32) at Royal-Memorial Stadium on Sept. 8, 2018. (Stephen Spillman / for American-Statesman)

Roach, a junior linebacker with 11 career starts, will miss the next six to eight weeks with a fractured foot. His timeline was announced on Monday as Texas began preparing for a TCU team that’s averaging 467.7 yards and 41.7 points per game. The Longhorns have plenty of experience in their linebacking corps, and senior Gary Johnson is the Big 12’s reigning defensive player of the week. Junior Jeffrey McCulloch is now listed as the starter at Roach’s B-backer position. Freshman Joseph Ossai is another option for the Longhorns.

Ehlinger missed last year’s 24-7 loss in Fort Worth  with a head injury. Buechele started instead and was sacked seven times. He completed 21 of his 44 throws for 254 passing yards and one touchdown. Ehlinger was asked this week what he remembered about the TCU defense. “I just remember them being very sound, getting off the field,” he said. “They’re great tacklers and they were very fast.”

3. Will Shawn Robinson once again get the better of Caden Sterns?

This will their first meeting in college but TCU quarterback Shawn Robinson and Texas safety Caden Sterns have squared off before — in the 2016 Class 6A Division II state championship game. Robinson led DeSoto to the 38-29 win over Sterns’ Cibolo Steele team. Robinson, now a sophomore, had 222 passing yards, 197 rushing yards and three total touchdowns; Sterns, now a freshman, had eight tackles and a pass breakup. Two years later, Robinson is 57 of 93 for 644 yards with five touchdowns and three interceptions. He’s also averaging 6.6 yards per carry. Sterns has started every game and he’s already logged first-year highlights that include an interception against Tulsa and a blocked field goal against USC.

4. What will Cameron Dicker do for an encore?

In last week’s win over USC, the freshman kicker notched the first three field goals of his Longhorns career. His first one was from 20 yards out, but the  former Lake Travis standout later was good from 46 yards out twice. Dicker became the first UT freshman to hit three field goals in a game since 2001. And it had been 35 years since a Longhorn kicked two 40-yarders in one game. So far, Dicker has kicked 12 touchbacks and converted all 11 of his extra points.

Texas had long expected a big crowd for last week’s USC game, and 103,507 fans were on hand for UT’s win. That crowd was a record-setter at Royal-Memorial Stadium, besting the 102,315 who attended the team’s season opener against Notre Dame in 2016. The No. 17-ranked Horned Frogs are ranked five spots higher than USC was last week, and this is UT’s Big 12 opener. Will the fans buy that TCU is a better draw? This matchup, by the way, has drawn over 99,000 fans in two of the last three Texas-TCU games played in Austin.