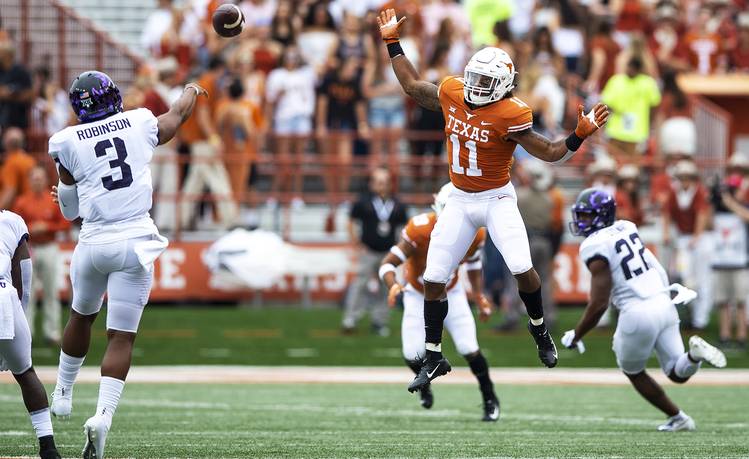 Texas nickel back P.J. Locke III apparently has picked up a side job this season — as a professor at DBU.

The senior defender has been handing out homework assignments. Locke said Tuesday that he has tasked his fellow Longhorns defensive backs with writing down the things they did wrong after each game. That way, he said, players can “look back at your notes and let’s see if anything shows up twice.”

“We get grades (from coaches) after every single game,” Locke said. “Even if you graded out 90 and above, I want you to still try to find something you can critique.”

When asked which of his younger teammates have been the most critical of themselves, Locke said he could only speak about the safeties. (As a nickel back, Locke practices with the safeties). Locke said five-star freshmen Caden Sterns and B.J. Foster are always asking questions to their older teammates, graduate assistants and safeties coach Craig Naivar.

Over the first four games of his collegiate career, Sterns has intercepted three passes. He was named the Big 12’s newcomer of the week on Monday after a breakout performance against TCU. And Foster, who was called the team’s hardest hitter by defensive tackle Chris Nelson on Tuesday, has three tackles and an interception.

Challenge accepted: Left guard Patrick Vahe recalled the Texas offense felt it “had something to prove” in last year’s game against Kansas State. He told reporters that Kansas State had built a reputation as one of the conference’s more physical teams. That led to the Longhorns setting a goal to be more physical than the Wildcats. In the 40-34 win that was decided in two overtimes, Texas compiled 546 yards of offense and allowed no sacks.

What’s the challenge for this week’s upcoming rematch with Kansas State? The Longhorns will apparently go with what worked last year.

“Being physical and finishing,” Vahe said. “We try to harp on you control your own development. As each week goes by, each practice that goes by, you try to get better as a player just so it can help you as an offense. Really, it’s just having the mindset of going out there and being the most physical that you can.”

Slow starts: Texas has allowed the first points in three of its four games. Tulsa threw an interception on the first play of UT’s 28-21 win on Sept. 8, but Maryland, USC and TCU have combined for 17 points on their opening drives.

Maryland and USC respectively began their games against Texas with six- and nine-play marches to the end zone. Last week, TCU’s first drive was capped by a 46-yard field goal.

“It’s just something we have to fix, that’s all that it is,” Nelson said. “It’s something we’ve got to fix at the end of the day, starting faster.”

Johnson honored: Junior wide receiver Collin Johnson was named the Earl Campbell Tyler Rose Award’s player of the week on Tuesday. He’s the first Longhorn this season to earn the honor, which is given weekly to a national offensive player who is either from the state of Texas or plays at a school within the state of Texas. Past winners this season have been North Texas quarterback Mason Fine, Colorado receiver Laviska Shenault Jr., and Texas Tech quarterback Alan Bowman.

In UT’s 31-16 win over TCU, Johnson led the Longhorns with seven catches and 124 receiving yards. His 31-yard touchdown catch in the third quarter gave Texas its go-ahead score.

Time for a change? Kansas State could feature a new starting quarterback for the Texas game