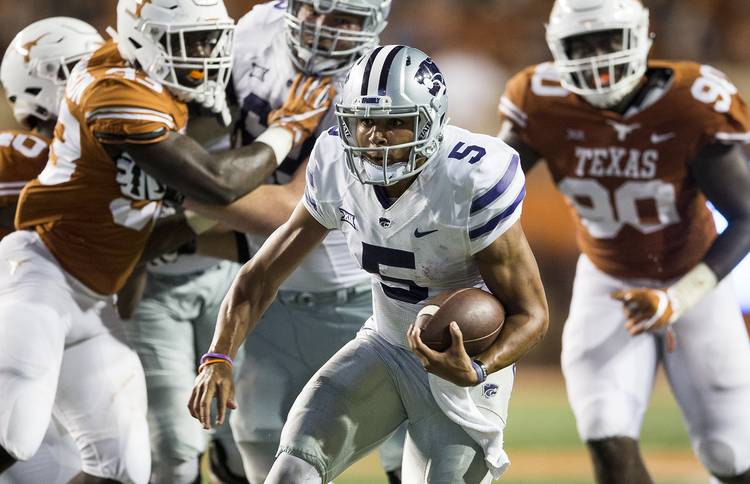 Bill Snyder sometimes steps on a pedestal to preach about how schools are putting too much money into big, gaudy sports palaces.

He doesn’t like excess. That’s a big no for the 78-year-old, so he doesn’t mind gigging administrators (including his own) who are all in on the building trend.

What are other topics that bother him?

It’s a big no when he thinks his team isn’t trying hard enough to learn the game plan or perform in the field.

He called out his own players after Saturday’s miserable, 35-6 loss on the road to West Virginia. He was incensed over a specific play, when the Wildcats went for it on fourth-and-short on their own 42 in the second quarter, when the game was 7-0.

“I can’t coach a team that can’t get six inches,” Snyder fumed after the game.

Snyder also called out starting quarterback Skylar Thompson, a redshirt sophomore, who had checked out of the called fourth-down play. It was supposed to be a quarterback sneak. He changed it at the line to a pitch to tailback Alex Barnes, who was stuffed by the Mountaineers for a loss of 4 yards.

Snyder told reporters this week that it wasn’t Thompson’s fault “that we were behind the 8-ball. “The point is, we didn’t have any points on the board and we just needed to do something and needed to make some type of change. And the other young guy has been playing equally as well. Both of them have their hiccups and their issues. Skylar played well … we just needed to try to do something to get a spark.”

Thompson was named the starter at the end of preseason camp. The Wichita Eagle, quoting two unnamed sources, reported Tuesday that Snyder always had preferred junior backup Alex Delton because he thinks his running ability is better suited for his style of offense. But quarterbacks coach Collin Klein and new offensive coordinator Andre Coleman wanted Thompson. Coincidentally, both Klein, a star quarterback, and Coleman, a receiver, ran Snyder’s offense when they played for the Wildcats.

The Wildcats didn’t cross midfield until the third quarter against West Virginia and its rebuilding defense. And they still only scored a couple of field goals.

Kansas State is next-to-last in the Big 12 in total offense, with its 347 yards a game besting only Iowa State’s 333. The Wildcats (2-2, 0-1) are averaging only 21 points a game. That’s ninth as well, topping only the Cyclones.

But the Wildcats do have pieces of an offense that can trend towards dynamic.

Isaiah Zuber has notched consecutive 100-yard receiving games, with 144 against Texas-San Antonio and 133 versus West Virginia. He also returned a punt 85 yards for a touchdown against South Dakota. He seems perfect for the role vacated by Byron Pringle, who left school early for the NFL.

Plus, Alex Barnes is considered one of the league’s top running backs. He’s fourth in the Big 12. He’s gained 277 yards through four games, averaging 69 a contest. He rushed for 819 last season.

So maybe a change of quarterbacks, if only to gain a different voice in the huddle, would be good for Kansas State, a team that’s reeling much too early in the season. The Wildcats needed a comeback to beat South Dakota

A Snyder offense needs a gritty quarterback who can run the ball and be effective with play-action passing. Thompson hasn’t been that guy, so far, this season. although he’s started all four games. Expect a lot of Delton Saturday in Manhattan. He came in for an injured Jesse Ertz last year, rushing for 79 yards and two touchdowns in a 40-34 double overtime loss to the Longhorns.

The Dotted Line: A closer look at Texas’ nine offers given out for 2021