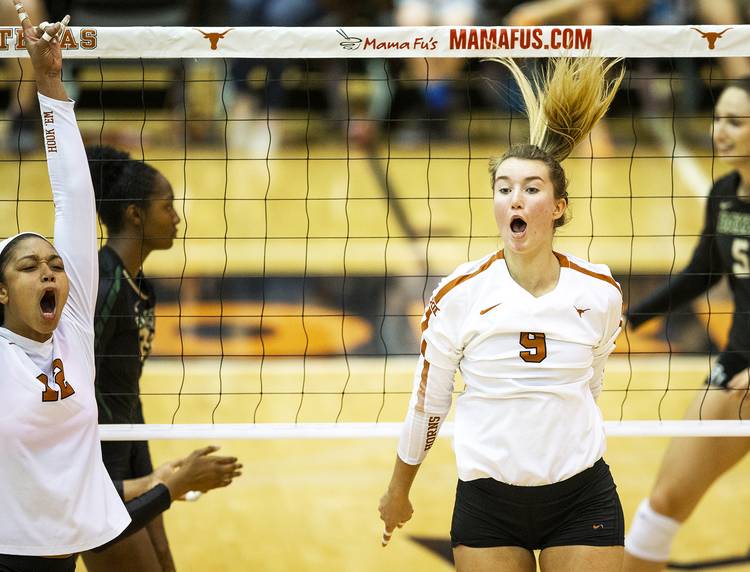 Texas setter Ashley Shook (9) celebrates a block against Baylor in Austin on Sept. 26, 2018. No. 4 Texas swept the No. 21 Bears. [NICK WAGNER/AMERICAN-STATESMAN]

Texas sophomore setter Ashley Shook has yet to lose a conference game and she wasn’t about to start on Wednesday.

The Longhorns will travel to West Virginia on Saturday.

“We know that people are going to play their best games against us,” Shook said. “I think that we just want to continue to focus on our side and that’s what we put a priority on.”

UT hit only .185 in the first set, but the Longhorns twice rallied from four-point holes against the mistake-riddled Bears. Baylor’s eighth service error gave UT a 24-23 lead. The Bears’ seventh attacking error was then ended the first set after it was upheld by a review.

Baylor continued to be woeful at the service line — the Bears committed five additional errors in the second set — but the Longhorns took over after the first-set intermission. Micaya White, Brionne Butler and Morgan Johnson each contributed three kills in the second set. Texas led by as many as 10 points in the finale.

The Longhorns were guided by White’s 10 kills. Butler and Johnson each had six blocks.

Texas played without senior outside hitter Yaazie Bedart-Ghani, who was ill. In her place, freshman Katarina Luketic registered four blocks and four kills on 13 swings. Luketic had appeared in only three sets over UT’s previous three matches.

“I think she’s arguably our best right-side blocker, so I think she did a nice job on that (against Baylor’s Yossiana Pressley),” Texas coach Jerritt Elliott said. “She’s a big part of this team. We’ve talked about it with her to be ready to play because she can put pressure on opponents.”

Baylor trailed only Texas in the Big 12’s preseason poll, but the Bears dropped their second conference match on Wednesday. No. 21 Baylor (9-5; 1-2) received 11 kills from Pressley, who also had 16 attacking errors and 39 attempts.

Just like in 2017, Texas defense started slow but showing ‘a lot of grit’ in late September