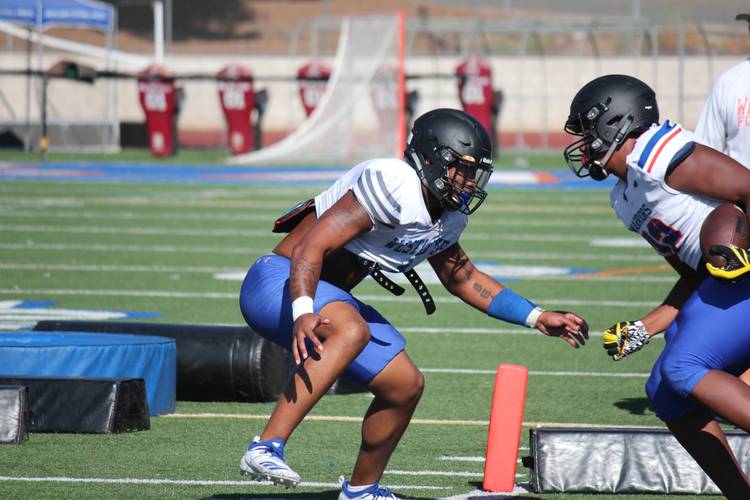 Texas’ 2019 class grew to 17 members on Monday afternoon when four-star safety Tyler Owens of Plano East pledged to the Longhorns. His commitment moved Texas’ class to the ninth spot in the nation. Tom Herman expects to sign at least 25 prospects and can sign a few over the limit because so many of the 2018 signees enrolled early.

The football season for the current commits is in full swing and we’ve seen nine of the 17 pledges in-person already this season. It’ll become 10 tonight after Huntsville and defensive end commit T’Vondre Sweat takes on A&M Consolidated.

Let’s rank the performances and impressiveness of each of the prospects. Reminder, this is not a ranking of overall ability as much as how good the player looked when I was in attendance this fall.

I watched commitments like Roschon Johnson and Jordan Whittington as juniors, most of the other commits in spring practice or at a camp, and Kenyatta Watson II on television, but for these purposes, we’ll only rank players I’ve seen play in person as a senior.

Smith is special. He oozes confidence and enjoyed the moment in his second game of the season. He scored as a rusher, a receiver and a returner in the game. There was no doubt who the best player on the field was and Smith rose to the occasion in all aspects of the game. Smith is natural with the ball in his hands, and it’s that type of comfort that will earn him playing time in college.

He’s too good to keep on the sidelines and could make a move towards five-star status if more national recruiting experts get a chance to watch him in person.

The football season in California started two weeks before it did in Texas, allowing me a chance to spend a week in California covering Connor Williams in his first year with the Cowboys and checking in on a pair of Texas commits. I spent two days at Westlake Village practice, watching and talking to De’Gabriel Floyd, as well as 2020 tight end Seth Figgins.

It was unclear at the time whether Floyd would be eligible for his prep team in Week 1, but he was cleared the morning of his first game. Floyd has grown into a middle linebacker, in my opinion, who can play in a similar role to Anthony Wheeler or at Rover like a Malik Jefferson.

Oak Ridge was spanked by The Woodlands in the meeting, but the score line had nothing to do with the performance of its four-star offensive tackle. If not for Kenyon Green, Johnson would be the clear-cut top offensive lineman from the state of Texas in the 2019 class. He excels as a run blocker and could play guard in college if speed rushers prove to much at the college level.

The tools were on display and no one sniffed the quarterback when tasked with beating Johnson around the edge. He also moved well in space for a big man.

The setting: vs. Killeen Shoemaker (Sept. 20)

Wiley is tough to scout because he’s playing quarterback for Temple as a senior. He did play tight end as a junior and was impressive as a pass catcher because of his sheer size and athleticism. That ability to move in space translates to quarterback where his ability to run helps the Wildcats offense as much as his touch with the football.

Wiley through for two touchdown passes and picked up a few first downs with his legs in the game I attended and he’s yet to play a snap in the fourth quarterback because of Temple’s dominance on the season.

Adimora is lightning fast. He plays wide receiver and safety for Mayfair and made an impact on both sides of the ball when I watched him play his first game of the season. Adimora scored a touchdown as a receiver and recorded an interception. His speed stands out among his peers, as does his willingness to tackle. The cover skills and football IQ were evident in his performance and when talking to him at length the day before his opener. Adimora loves football and his effort demonstrates that emotion.

Houston wasn’t asked to do much in the season-opening victory over Heritage Hall, the defending Class 4A state champions in Oklahoma. Millwood, the team Houston plays for, won the Class 2A state title in 2017 and looks like the favorite to repeat. It was the first game for both teams and it was sloppy and run-dominated. Houston’s main impact was drawing double teams in the passing game and causing poor punts based on his reputation in the return game. It’s his speed and consistency catching the football, even in warmups, that makes scouts drool.

Mpagi is the best pure pass rusher committed to the Longhorns in the 2019 class. He’s long and athletic off the line of scrimmage and will remind folks of 2018 signee Joseph Ossai in terms of frame and potential. Mpagi lacks consistency and admits his motor must improve at the college level. The skills needed to become a defensive end or even a B-Backer in Texas’ system exists, and you won’t find a prospect more in love with UT.

The setting: vs. Faith Lutheran (Sept. 8)

Liebrock was quiet in Chandler’s victory over Faith Lutheran, which was part of the Polynesian Classic in Las Vegas that included programs like IMG Academy. He wasn’t targeted often, and when he was, he failed to bring in the ball or the throw was off target. He finished the game with a couple of catches for fewer than 20 yards. Still, it is easy to see what the Texas coaches like in Liebrock. He’s a smooth route runner with height and soft hands.

Shepherd showed a few flashes in the win over Booker T. Washington, but he isn’t the dominant player his ranking would suggest. Shepherd is raw and will need a lot of work, both physically and mentally, to meet expectations at the college level. His effort left a lot to be desired and maybe once he’s truly motivated the light will come on because his potential is unlimited at offensive tackle. He’s big, strong, has long arms and is athletic for a guy approaching 350 pounds.