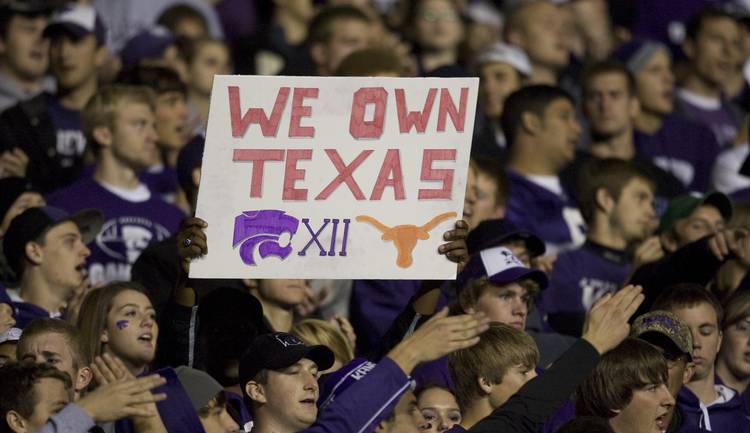 Kansas State fans cheer in the second quarter against UT at Bill Snyder Family Stadium in Manhattan, Kan. on Nov. 6, 2010. Kansas State has won five straight over the Longhorns there.

Every Sunday when Texas players gather for their workout, strength coach Yancy McKnight starts giving out bullet points about the next opponent. One in particular this week seemed rather shocking.

These 18th-ranked Longhorns may not know what has previously transpired in these past Manhattan mysteries. They’re blissfully unaware that K-State fans love to chant, “We Own Texas!”

But frankly, they have. The Wildcats are 7-1 at home in the all-time series against the Longhorns. The average margin of victory is 15 points. Last year’s game at Royal-Memorial Stadium went to double-overtime before UT prevailed, 40-34.

Saturday is another sojourn into Bill Snyder Family Stadium. Texas (3-1, 1-0 Big 12) needs to protect its three-game winning streak and build on back-to-back wins over top-25 programs.

The Wildcats (2-2, 0-1) have struggled offensively and abruptly switched quarterbacks last week. They could be 0-4 and it probably wouldn’t matter in this saga. For Texas, Manhattan may as well be Krypton. This military and college town is full of nothing but purple kryptonite to those in burnt orange.

“You want to talk about progress for a Texas program, you go up and win at K-State, something that hasn’t happened in 16 years, I think Longhorn fans will start drinking that Kool-Aid again,” former UT defensive back Rod Babers said this week.

Babers, now a sports talk host on 104.9 The Horn, was a senior in 2002. He was there that night in Manhattan when Dusty Mangum drilled a 27-yard field goal with 1:32 left. All the while, the K-State crowd chanted, “We hate you! We hate you!”

Mangum, who was slumping at the time, was dead-eye accurate. “All of a sudden, they were chanting,” Magnum told reporters that night. “I was really glad that I got that kick and was able to shove it in their face.”

Still, the 8th-ranked Horns had to hold their breath as the 17th-ranked Wildcats moved into field goal range just before time expired. KSU’s Jared Brite had an extra point blocked earlier in the game. With seven seconds left, his game-tying field goal from 36 yards came out low.

Defensive tackle Marcus Tubbs blocked it for the Texas win.

“It was a weird game,” Babers recalled. “You’re talking about 16 years ago, so I’ve gone back and done some research on it myself. People think it’s the last time Texas won in the Little Apple. No, no, no: It’s the only time. They’re just trying to spin it to make it sound better.”

K-State fumbled the ball five times that night, losing only one. UT quarterback Chris Simms completed only 13 passes, but B.J. Johnson caught four of them 132 yards and a touchdown.

That win helped UT bounce back from a loss against Oklahoma the previous week. Texas finished the season 11-2 and ranked sixth in the Associated Press poll.

“It was one of those things where honestly I don’t know if we had any business really winning the game,” Babers said.

This series stretches all the way back to 1913. The next game, which was UT’s first loss in Manhattan, didn’t happen until 1926 as part of a home-and-home arrangement. There was a one-off game in Austin in 1942 which Texas won 64-0. The two programs came together when the Big 12 was formed in 1996, though they didn’t play each other until 1998.

In those years, Texas and Kansas State were in opposite Big 12 divisions. They didn’t start playing every year until 2010. The Wildcats hold a 4-3 advantage since then.

In 1998, Snyder had it rolling, as the Wildcats were ranked fifth nationally and whipped first-year coach Mack Brown and his club 48-7. The 2002 game was an escape, but then the losing really began.

The 2006 matchup in Manhattan was memorable because UT was ranked fourth and lost 45-42. Redshirt freshman quarterback Colt McCoy suffered an injury on the opening drive, and the night ended with K-State fans storming the field. Ten years later, Snyder’s team put together a no-fluff 24-21 win over UT coach Charlie Strong. In the first half, the Wildcats had 19 first downs while the Longhorns had 19 total offensive plays.

“Good luck to you,” Snyder told Strong afterward. “Just hang in there. I mean this from the bottom of my heart, you’re the guy. You are the guy.”

Fortunately for current UT coach Tom Herman, none of this matters. Time to write a new chapter, or at least that’s what he hopes. Even with all the negative historical mojo going against them, the Longhorns are the ones favored by a touchdown.

K-State is the team that looks wobbly. In last week’s loss at West Virginia, Snyder made an impulse decision to switch quarterbacks, going to Alex Delton without consulting his offensive coaching staff. He’ll likely try anything to jolt an offense that has the second-lowest offensive totals in the Big 12.

Asked by reporters about his thoughts moving forward, Snyder said, “I was just visiting with our coaches a little bit ago, and I do not know right now. We have not really established an identity.”

K-State’s identity whenever Texas rolls into town is undeniable. It’s one of domination.

What’s funny is the stadium itself isn’t particularly intimidating, at least not from an aesthetic point of view. After a terrific expansion project, the place holds just 50,000. The fans just turn the place upside down while friendly ushers win you over with Midwestern charm — “Welcome to K-State.”

“I don’t know about the environment or what the stadium looks like,” said UT quarterback Sam Ehlinger, who’ll be playing his first there, “but I do know what’s going to happen on the field.”

A win would give the Horns their first four-game winning streak since 2013. It’d give players a major boost of confidence and serious momentum heading into next week’s Red River showdown against Oklahoma.

The Dotted Line: Which Texas commits are the most impressive in person?