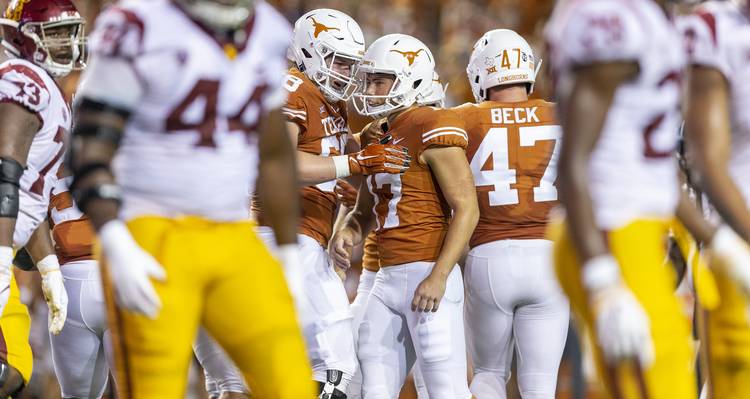 Here are five key matchups in the Texas-Kansas State game to keep your eye on Saturday:

Kansas State quarterbacks Alex Delton and Skylar Thompson have both played in all four games for the Wildcats, but there is speculation that Delton will start for the first time this season. That would set up an interesting rematch; Delton came off the bench and rushed for two touchdowns vs. Texas last year in Austin, but he was overshadowed by Ehlinger, who had 487 yards of total offense (380 passing, 107 rushing) in the Longhorns’ double-overtime win. Ehlinger’s 487 yards were third-most in UT history.

After last week’s win over TCU, Longhorns receiver Lil’Jordan Humphrey proclaimed that Texas had one of the “best wide receiver group in the nation.” In Humphrey and Collin Johnson, Texas is one of just eight teams in the country with two 20-catch receivers. Kansas State defensive back Kendall Adams was named to the Big 12’s preseason team, but his secondary surrendered 12 receptions to ex-UT receiver Reggie Hemphill-Mapps last year. Johnson and Humphrey combined for 11 catches in that game.

Over the last two games, Nelson — Texas’ 315-pound defensive tackle — has celebrated his big plays with a belly rub that teammates like linebacker Gary Johnson have even tried to duplicate. But he said this week that Texas defensive coordinator Todd Orlando has told him to shelf the belly rub, but the Wildcats would prefer to do that themselves. Kansas State’s interior linemen — Tyler Mitchell, Adam Holtorf and Abdul Beecham — have combined for 61 career starts. Nelson, meanwhile, will be making his 20th.

Both kickers in this game have a story to tell. Dicker, who was one of the top kickers of the 2018 recruiting class, missed two field goals against TCU last week but his three field goals — including two 46-yarders — against USC were a positive sign for a program that has struggled with its place-kicking. Lynch, a 5-5 sophomore who once worked as a janitor in Kansas State’s athletic department, recently was placed on scholarship. He ranks third nationally with nine field goals, and his only misses have been from 50 and 52 yards.

The Longhorns haven’t won in Manhattan since 2002, five straight losses (in 2006, 2010, 2012, 2014 and 2016). Sure, those years skipped the Vince Young era and caught McCoy when he was a redshirt freshman, but history is history. That five-game road losing streak is a UT record against any one opponent, though the Longhorns did go winless in eight straight games at Texas A&M from 1925 to 1939; the fifth game of that run was a 10-10 tie in College Station in 1933. So some sort of streak will end on Saturday — Texas has won three straight games for the first time since 2014, wins over Tulsa, USC and TCU.

The Dotted Line: Which Texas commits are the most impressive in person?