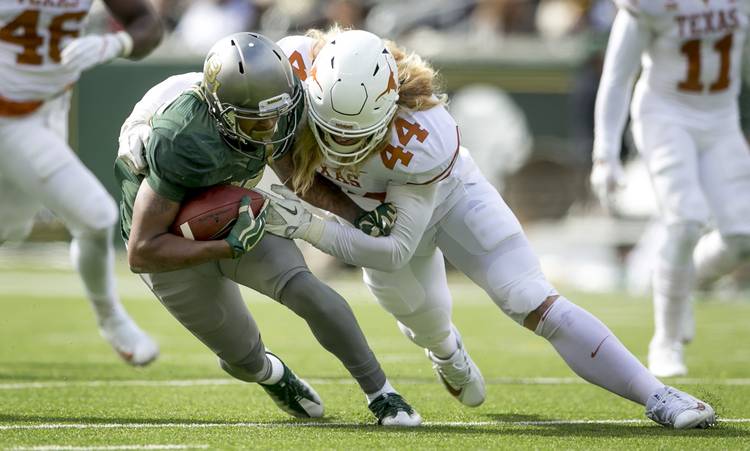 Texas’ junior wide receiver leads the team with 21 catches, and his last three games have featured 40-, 47- and 38-yard touchdowns. That three-game touchdown catch streak is tied for seventh in program history. Humphrey will look to avoid the fates of Texas’ most recent three-game streakers. After scoring in three straight games in 2016, Devin Duvernay didn’t score another one. And after touchdown catches in the first three games of 2017, Armanti Foreman had only one more the rest of the season.

2. Will DBU keep up with speedy Wildcats WR Dalton Schoen?

Schoen, a junior, posted pedestrian numbers last year — 23 catches, 470 yards and three touchdowns. But he played like an All-American against Texas. Schoen scored twice in the Longhorns’ double-overtime win, and his 82-yarder was the longest touchdown catch of the season against Texas in 2017. After his 128-yard day against Texas, the former walk-on recorded another 100-yard game against Texas Tech. This season, Schoen has nine catches, averaging 21.6 yards per reception.

3. Will Breckyn Hager stand out after his slow start?

Back in July, two Longhorns were placed onto the Big 12’s preseason team. Cornerback Kris Boyd has mostly justified the votes he received, but beyond a fourth-down stop at Maryland, Hager has not made an impact. The defensive end has eight tackles and two quarterback hurries, which has led to questions about his effectiveness. Texas, though, is standing by the senior. “He’s getting close to the quarterback,” UT coach Tom Herman said on Monday. “He hasn’t had a lot of numbers show up just yet. But I think they’re coming.”

Texas has yet to have a player rush for 100 yards in a game. Graduate transfer Tre Watson got the closest with a 74-yard effort against Tulsa. Thus far, Kansas State has just one 100-yard game — junior running back Alex Barnes (103 yards vs. South Dakota in the season opener. Texas is less than two years removed from having a 2,000-yard rusher and Kansas State ranked 32nd nationally in rushing offense last year. This fall, the Longhorns and Wildcats rank 83rd and 92nd, respectively.

5. Will Texas avoid playing down to its competition?

Over the past two weeks, in wins over No. 22 USC and No. 17 TCU, Texas has looked like a team that should be ranked among the top 25 teams in the country. Sure enough, the Longhorns are ranked 18th this week. But Texas also has played two unranked teams, and the Longhorn lost to Maryland (which is now 3-1) and squeezed by Tulsa (1-3). The Golden Hurricane are 3-13 since the start of last season. Kansas State is 2-2, but 0-2 against teams from Power 5 conferences.