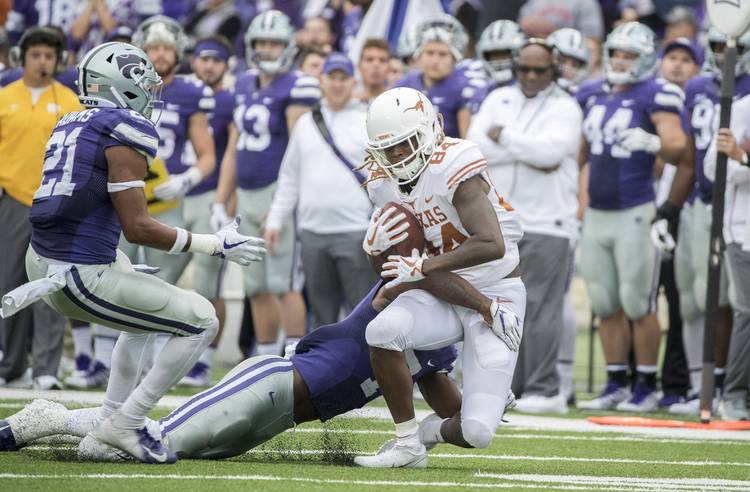 Texas Longhorns wide receiver Lil'Jordan Humphrey (84) gets tackled to the ground by Kansas State Wildcats defensive back Eli Walker (7) in the second half of the NCAA college football game in Manhattan, Kan, at the Bill Snyder Family Stadium on Saturday, Sept. 29, 2018. [RICARDO B. BRAZZIELL/AMERICAN-STATESMAN]

Revisiting our five pregame questions that were facing the Longhorns ahead of Saturday’s 19-14 win over Kansas State.

Texas’ junior wide receiver finished with five catches for 50 yards but was kept out of the end zone. Humphrey’s last three games included 40-, 47- and 38-yard touchdowns. That three-game touchdown catch streak tied him for seventh in program history. So he became the third straight Longhorn to see his three-game scoring streak snapped; Devin Duvernay had a touchdown catch in three straight games in 2016 but didn’t have another one that season and Armanti Foreman opened the 2017 season with touchdowns in three straight games, but got only one more the rest of that season.

2. Did DBU keep up with Dalton Schoen?

Oh, the speedy junior receiver led Kansas State in receiving (5 catches for 67 yards) but didn’t burn the Longhorns with the big play like he did last year — two touchdowns in Texas’ double-overtime win in Austin, including an 82-yarder that was the longest touchdown catch allowed by Texas last season. He had 128 yards last year against Texas. The Longhorns did a good job of not letting Schoen get past them, giving him a cushion throughout the day.

3. Did Breckyn Hager stand out?

In fact, after defensive backs have starred in recent games, it was the Longhorns’ defensive line that led the way in Manhattan. Hager was Texas’ top defender, finishing with 4 tackles (3 solo), 1 sack, a tackle for loss, a pass breakup, a quarterback hurry and a forced fumble. His hurry forced an incompletion. One of his stops was at the goal line, on third down. And his breakup was critical, coming on third down that forced Kansas State to punt with six-and-a-half minutes left; the Wildcats had to punt and never got the ball back.

Freshman running back Keaontay Ingram led the team with 68 yards on 10 carries. He averaged 6.8 yards per run. And Kansas State’s Alex Barnes had 80 yards on 19 carries. That neither team topped the 100-yard mark should come as a surprise; this season the Longhorns and Wildcats ranked 83rd and 92nd in rushing nationally heading into Saturday’s game.

5. Did Texas avoid playing down to its competition?

This wasn’t the same team that downed No. 22 USC or No. 17 TCU. Texas fashioned a 19-0 halftime lead powered by a punt return for a touchdown and a safety. So for the third time this year, the Longhorns struggled against an unranked team. Texas lost at Maryland, squeezed by Tulsa and survived Kansas State.

Texas 19, Kansas State 14: After fourth straight win, ‘I think we know how to finish now’