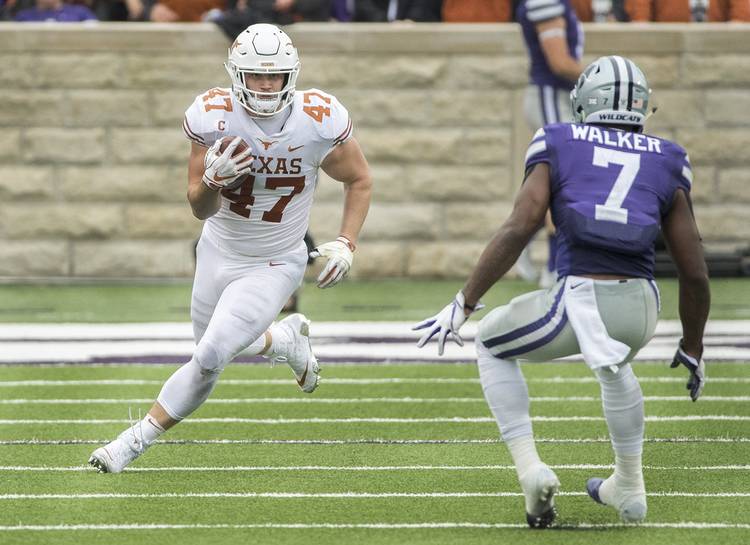 MANHATTAN, Kan. — In Saturday’s second quarter, Sam Ehlinger ran twice and became the 15th quarterback in school history to pass for 3,000 yards in a career. He was also UT’s leading receiver in the 15-minute quarter.

On the first play of the second quarter, Ehlinger hauled in a 21-yard pass from running back Tre Watson. Watson’s under-thrown pass prevented an open Ehlinger from scoring on a play from the Kansas State 26, but Ehlinger eventually threw a short score to Collin Johnson. Later in the quarter, Ehlinger caught a deflected pass that he threw and gained three yards.

Two weeks ago against USC, Ehlinger turned a trick toss from Jerrod Heard into an 11-yard gain. He also had two receptions during his freshman year. Counting himself, Ehlinger has now caught five passes from four different Longhorns (Heard twice, Lil’Jordan Humphrey and Watson).
Advertisement

Ehlinger is averaging 17 yards per catch in his career.

Ehlinger, of course, is not the only pass-catching quarterback from Austin’s Westlake High. Nick Foles, who graduated from Westlake 10 years before Ehlinger, caught a one-yard touchdown pass on a trick play in last season’s Super Bowl. Foles led Philadelphia to a 41-33 win over New England.

Ehlinger finished Saturday’s game with 207 passing yards and has now gone 128 consecutive passes without an interception, the third-longest streak in school history. He ran for 26 yards over eight carries.

Freshman class’ special contributors: Relying on freshmen, Texas had its hits and misses on special teams against the Wildcats.

A 90-yard punt return by D’Shawn Jamison was the fourth-longest in school history. Jamison, however, did not return another punt after his touchdown as junior Brandon Jones had three fair catches when UT opted to play things safe with a lead. Jamison averaged 18.5 yards over two kickoff returns.

Cameron Dicker converted a 28-yard field goal but also missed from 48 yards out. The Lake Travis alumnus is now 5-for-8 on the season. Dicker made three kicks against USC and was 1-for-3 against TCU.

Ryan Bujcevski averaged 36.7 yards over his three punts with a long of 44. After receiving a high snap, Bujcevski also had an attempt partially blocked in the third quarter. That kick went 17 yards, but the Texas defense forced a punt on an ensuing possession that started on the Kansas State 35.

Jamison, Dicker and Bujcevski were all members of UT’s 2018 recruiting class.

Because Kansas State players refused to allow Texas players to warmup on their side of the field, a fight between TE Andrew Beck and another player nearly ensued. pic.twitter.com/GzjCXPMgZy

Beck’s pregame and in-game battles: About 90 minutes ahead of the game, a skirmish broke out between Texas tight end Andrew Beck and a couple of Kansas State’s skill players. Beck appeared perturbed that the Wildcats were on UT’s side of the field and interrupting warm-up drills. A few shoves and words were exchanged.

A senior and second-year captain, Beck earned a career-high four catches against Kansas State. Beck didn’t say much about the interaction after the game. He said his “juices (were) flowing, excited to play a game.” He added he didn’t talk to either Wildcat during the game.

News and notes: Texas honored the late Julius Whittier by wearing helmet decals with his initials. Whittier, the first African-American to letter in football at Texas, passed away on Tuesday. He was 68. … Junior Kyle Porter was not among the five scholarship running backs that Texas dressed on Saturday. Porter had appeared in each of UT’s first four games. He has only three catches, one kickoff return and a rushing attempt against Maryland that he scored on. … Kansas State junior linebacker Da’Quan Patton, a graduate of Cedar Park’s Vista Ridge High, had eight tackles.