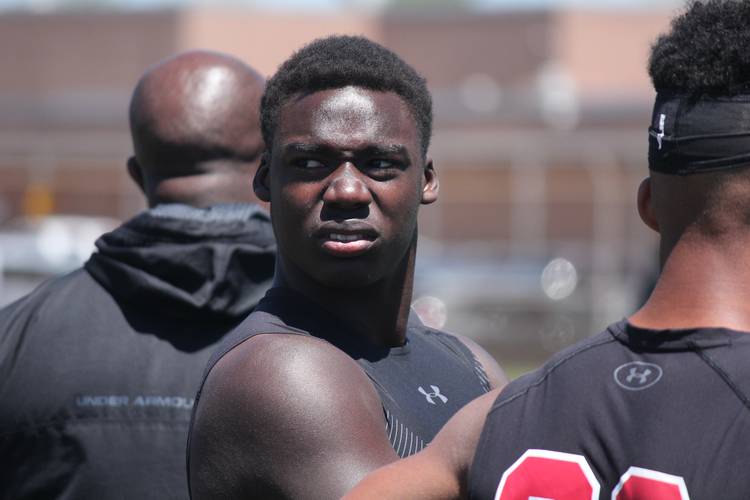 Texas’ recruiting class grew to 18 on Sunday night with the commitment of four-star inside linebacker David Gbenda. The Katy Cinco Ranch product was offered on Sunday and committed to Tom Herman days later. Gbenda ranks No. 34 on the Fabulous 55.

“I’m living in a dream,” he said via text message.

Gbenda was a first-team all-district selection as a junior. He finished the year with 56 tackles, including eight for loss and two sacks. He also batted down two footballs. The momentum for Gbenda in recruiting began after a strong showing at The Opening regional in Houston. He picked eight P5 offers since the event on Feb. 25.

Skill set: Gbenda is a modern inside linebacker. He’s tough and hard-nosed like all middle linebackers need to be, but he can also run sideline-to-sideline and isn’t uncomfortable in pass coverage. He’s the idea Big 12 middle linebacker because of his athleticism. Gbenda is a run-stopper first, however. He’s a thumper at the point of attack and doesn’t mind taking on lead blockers or pulling offensive linemen.

His instincts for the game are evolving and his best football is years ahead of him. Gbenda can also rush the passer, something Texas defensive coordinator Todd Orlando likes in linebackers. The 4-star is built like the types of middle linebackers Orlando has chased since arriving in Austin. Both Gary Johnson in the 2017 class and Ayodele Adeoye in 2018 are around the same size and bring speed to the position.

Immediate impact: Players like Johnson, Edwin Freeman and Anthony Wheeler will all be gone by the time Gbenda reaches campus. He’ll arrive in Austin ready to compete against the likes of Adeoye, Demarco Boyd and Marqez Bimage. There is a chance Gbenda can work his way into the two-deep as a true freshman if that trio doesn’t take a giant step forward in 2018.

Gbenda can play with those guys and earning playing time, specifically on special teams and on short-yardage packages. His ability to get after the quarterback from the middle of the defense is also a trait that can help him get on the field early in his career. Texas hopes Adeoye is in firm control of the middle linebacker position in 2019.

Fitting into the program: Gbenda is another Houston-area prospect who chose the Longhorns over rival programs. It is an occurring theme under Herman. Texas wants a guy in Houston; Texas signs a guy in Houston. There are few exceptions over the past two classes and Herman is starting to make his mark in the 2019 class after playing his cards slow. Gbenda will fit the culture building at Texas and he’ll know plenty of faces in the locker room from his prep days.

Recruiting at the position: Gbenda is the third linebacker to pledge to Texas in the 2019 class, joining four-star De’Gabriel Floyd and three-star Marcus Tillman Jr. The Longhorns want a fourth linebacker, but the top target is yet to materialize unless the Texas staff sees Bru McCoy as a possible number there, or if a player committed to another school is still showing interest. It’s most likely Texas sticks with the three current prep commits in hand and tries to add a JUCO prospect before national signing day.