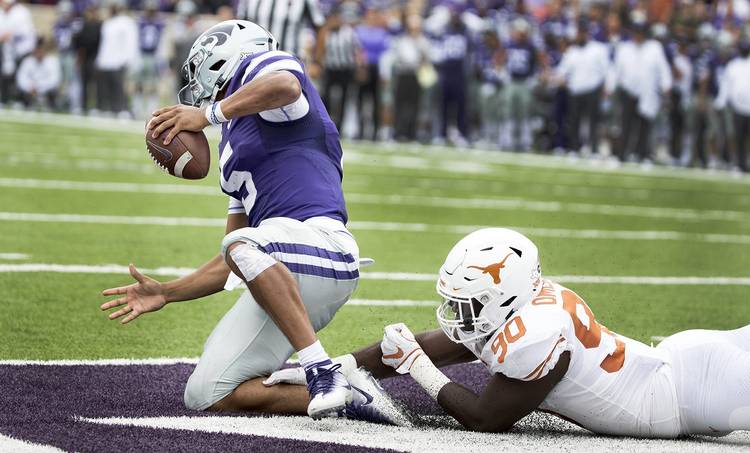 MANHATTAN, Kan. — There were 131 snaps taken in Texas’ 19-14 win at Kansas State on Saturday. Here are five that ended up making a big difference:

In three of its first four games, Texas allowed its opponent to score on its first drive. When asked about that trend last week, defensive lineman Chris Nelson said, “It’s something we’ve got to fix at the end of the day, starting faster.”  Consider the “faster” part of Nelson’s mission accomplished.

Kansas State’s first drive lasted eight plays and covered 28 yards, but the Wildcats were eventually forced to punt. Andrew Hicks got off a 55-yard kick that true freshman D’Shawn Jamison fielded at the Texas 10. Using key blocks from Josh Thompson and Anthony Cook and a few nice moves of his own, Jamison took off for a 90-yard touchdown.

The punt return was the fourth-longest in school history. It was also the first touchdown for UT’s punt return team since Reggie Hemphill-Mapps had a 91-yard return against Maryland in 2017. Hemphill-Mapps, who transferred in the offseason, and Jamison both scored while wearing the No. 17 jersey.

After Texas scored on Jamison’s return and Collin Johnson’s 4-yard catch, the UT defense also got into the box score. An ill-advised kickoff return after Johnson’s second-quarter score set Kansas State up with the football at its 9-yard-line. Texas defensive end Charles Omenihu then recorded two sacks over a three-play span.

Omenihu’s second sack resulted in a safety. Kansas State quarterback Alex Delton attempted to get rid of the football at the last second, but officials correctly ruled he was down in the end zone. The safety was UT’s first since the 2017 Texas Bowl.

After he recorded his first sack of the season against USC on Sept. 15, Omenihu told reporters that sacking the quarterback was “the most amazing feeling a defensive lineman can ever have in their whole career.”

Was getting a safety a little more fun, though? “Yes, because that puts point on the board and helps the team,” Omenihu replied Saturday.

In its previous eight trips to Manhattan, Texas had never held a halftime lead. The Longhorns led 19-0 after two quarters Saturday, but that first-half shutout was in jeopardy in the second quarter’s waning seconds.

With 2 seconds left, Kansas State left its offense on the field on a fourth-and-goal from the Texas 2. The Wildcats originally decided to run a play out of the wildcat formation with running back Alex Barnes taking the snap. After Texas called a timeout, Delton was asked to throw the ball.

Delton lofted a high but catchable pass to an open receiver in the end zone. However, a leaping Adam Harter dropped the ball.

Kansas State switched quarterbacks at halftime, and sophomore Skylar Thompson, who had started the Wildcats’ previous four games, engineered a 10-play touchdown drive to open the second half. Then with 9:55 left, Barnes pulled Kansas State within five points when he dove over a pile of Longhorns and Wildcats for a 1-yard score on fourth down.

Barnes’ score wasn’t the most impressive fourth-down conversion on the 16-play drive, though. Four plays earlier, Dalton Schoen bested P.J. Locke III for a 10-yard catch on a fourth-and-7 from the Texas 17.

The Texas defense held Kansas State to a three-and-out on its next possession, and UT took over at its 40-yard line with 6:20 left. The Wildcats never touched the football again.

Texas put the game away with a 10-play possession. The drive featured two third-down conversions, none more important than Sam Ehlinger’s 12-yard pass to Johnson on a third-and-10. Ehlinger also ran for a first down on a third-and-1.

The clock-killing possession secured UT’s first four-game winning streak since 2013. In each of those victories, the Texas offense has been efficient in the fourth quarter.

Texas 19, Kansas State 14: After fourth straight win, ‘I think we know how to finish now’