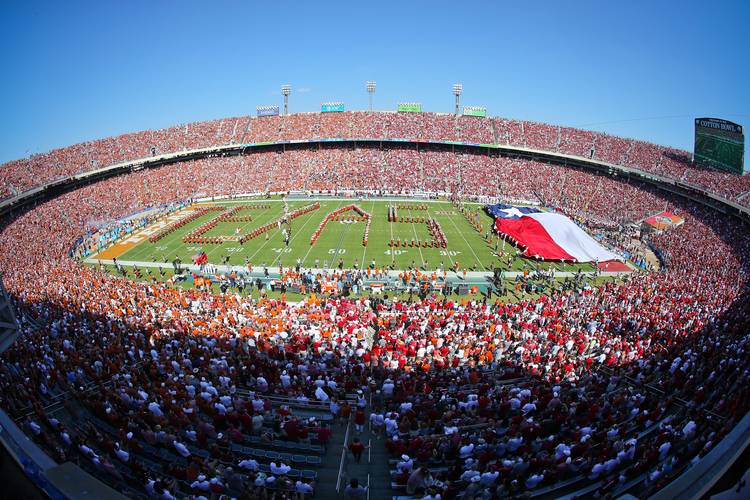 It's Texas-OU week, and a lot will be on the line for the Longhorns and Sooners at the Cotton Bowl in Dallas on Saturday. (Richard W. Rodriguez/Getty Images)

Every week thus far, the Texas coaching staff had clear-cut storylines for the Longhorns.

Texas needed to get its first road win at Kansas State since 2002. Yes, sir.

There’s an easy selling point heading into October. If the 19th-ranked Longhorns (4-1, 2-0 Big 12) can beat undefeated Oklahoma this week, they will be legitimate Big 12 and national title contenders. Of course, the seventh-ranked Sooners can say the same thing. Seems like old times, doesn’t it?

Go ahead and laugh, if you like. That’s understandable, considering this program has posted three losing seasons in the past four years. Texas hasn’t been a serious national contender since 2009. Perhaps that’s simply too much expectation placed upon a group still in rebuilding mode. But it’s true.

ESPN’s “College GameDay” producers know a good theme when they see it. Network executives announced Sunday their signature pregame college football show is coming to the State Fair of Texas this week in Dallas.

Kickoff will be at 11 a.m. Saturday, but Texas fans know what time it is. Quarterback Sam Ehlinger will spend this week denying that last year’s hard takedown was the deciding factor in the 29-24 loss. Newcomers Keaontay Ingram and Caden Sterns will want to leave their mark, too.

On the other side of the Red River, the Sooners (5-0, 2-0) will bring their upside-down “Hook ’em” hand signs. Quarterback Kyler Murray, arguably the Big 12’s most dynamic playmaker, needs to play well in this game to secure whatever OU legacy he’ll leave behind during his one season in Norman.

Good luck finding any Texas fan who thought this team would be in this position after the season-opening loss to Maryland. And yet, here are the Horns, likely to be oddsmakers’ favorites more often than not as the season stretches on.

“That’s kind of the standard around here,” UT receiver Collin Johnson said, “and we’ve just got to keep it up week in and week out, not get too high or too low.”

UT coach Tom Herman sounded like a guy apologizing for a five-point win at Bill Snyder Family Stadium on Saturday. “At the end of the season when you look at our record, you’re not going to see half a W in the win column for this, you’re going to see a full W,” he said. “They all count the same.”

The only ugly thing was the penalties. Texas was flagged 10 times for a season-high 104 yards.

Herman said his receivers needed to get better at initiating contact with the defensive backs to draw more pass interference calls, just as the Wildcats did. Two in particular on long passes, one against Davante Davis and another against Kris Boyd, looked questionable.

“I’ve got to do a better job of teaching that, on how to draw flags because teams are getting really good at it,” Herman said.

The offense scored only one touchdown — Johnson’s 4-yard catch while falling flat on his back in the end zone.

Looking at the overall numbers on paper, there wasn’t much to write home about. Keaontay Ingram led the UT rushing attack with 68 yards on 10 carries. He disappeared for long stretches as coaches gave opportunities to Tre Watson, who finished with 24 yards on seven carries.

The Texas-OU game has a way of turning supporting characters into stars, especially at running back. Perhaps this is the week UT coaches give Ingram, a clear difference-maker, a longer run.

Ehlinger’s final numbers against K-State only burnish his reputation as an efficient game manager. He completed 29 of 36 passes for 207 yards. For the fourth straight week, Ehlinger did not throw an interception.

Ehlinger was confident going through progressions and finding Johnson and Lil’Jordan Humphrey. Those two receivers combined for nine catches and 101 yards.

“I don’t think it’s like, ‘Hey, it’s third down; let’s throw it to Collin,’ ” Ehlinger said. “They’re taking away LJ because they know we’ve been going to him a lot. That’s the great thing about our offense. You try to take one thing away, and we’ll hit you with another.”

And Ehlinger had no problems using Ingram as his check-down option. The freshman had five receptions out of the backfield for 27 yards.

The real question is whether Texas has enough offensive firepower to keep up with OU’s Murray. The Sooners rank eighth nationally in scoring (48.6 points per game), and Murray has a 230.95 efficiency rating, the second-highest among all FBS players. Only Alabama’s Tua Tagovailoa (238.32) ranks higher while leading the No. 1-ranked Crimson Tide.

Murray was suspended for the first drive against Baylor on Saturday for oversleeping and being late to Friday’s practice. He still finished with 432 passing yards and six touchdown passes.

“He made all the throws, extended plays, had a crazy play when he picked up the fumble and found a guy,” OU receiver Marquise Brown told reporters. “That is what he does.”

UT defensive coordinator Todd Orlando will zero in on the defensive penalties. Otherwise, his unit played its normal game against K-State. Charles Omenihu had two sacks and a safety. Breckyn Hager, who might have been pressing, finally got some traction with one sack, one tackle for loss, one forced fumble and one pass breakup by batting a ball down at the line of scrimmage.

K-State fans are probably frustrated with Snyder’s decision to play Alex Delton in the first half and Skylar Thompson in the second. Thompson had far more success, completing 8 of 18 passes for 96 yards and running for a score.

“We won ugly,” Herman said. “The key word in there is ‘won.’ They’re all going to look pretty on Sunday when you wake up.”

If the Horns wake up next Sunday with yet another win, the final six games will look awfully pretty indeed.