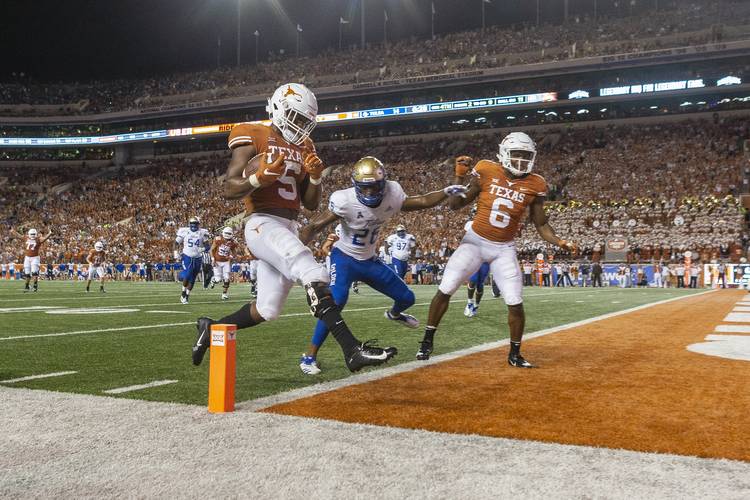 “I think right now, we’re low in terms of red-zone scoring,” Hand said after Wednesday’s practice. “We’re getting hats on hats. We’re not really displacing guys the way we need.”

Low is subjective. The Longhorns rank last in the Big 12 when it comes to scoring inside the 20-yard line. On 16 attempts, Texas has eight touchdowns and three field goals — a total of 68.75 percent. In case you’re wondering, that’s tied for 125th nationally.

Against Tulsa, Texas took a knee from the 15-yard line to end the game. Against Kansas State, Texas’ final snap came from the 22-yard line, so that doesn’t count against the numbers. The Horns have also missed two field goals from that area, too.

Granted, the 19th-ranked Longhorns (4-1, 2-0 Big 12) are currently riding a four-game winning streak. But Texas cannot miss any scoring chances this week against No. 7 Oklahoma in the Red River Showdown.

“This is not the type of game, nor do we want to kick field goals,” Hand said. “You’ve got to score touchdowns. That’s the nature of the business — scoring touchdowns in the red zone. We’ve got to be better there.”

Oklahoma has scored 17 times on 19 trips inside the opponents’ 20-yard line. Only Baylor, West Virginia and Iowa State have spotless records thus far in that area.

Boyd struggled against the Wildcats, getting called for a personal foul and pass interference. He finished with four tackles and one pass break-up. Fellow cornerback Davante Davis was also flagged for pass interference.

Losing one’s composure would be ill-advised against OU. Receivers Marquise Brown and CeeDee Lamb are two of the nation’s best at racing deep and burning defensive backs. Together, they average 20.7 yards per reception.

“We rolled back in and talked to him, get him back right,” Orlando said of Boyd. “The one thing about that position, it’s a lonely existence out there. I always say to myself, how can I help? We could do more things to help him out. But he’s had two really good days of practice. So has Davante. And I expect those guys to play big on Saturday.”

Watching the other Murray: OU quarterback Kyler Murray will get all the TV camera time on Saturday. But the Longhorns need to watch for linebacker Kenneth Murray across the line of scrimmage.

Kenneth Murray is the Sooners’ leading tackler with 64 stops. He’s got three sacks, two quarterback hurries and six tackles for loss. It seems like he’s everywhere on the field. “’Cause he is,” Hand said. “He’s a very active player. He’s a guy that you’ve got to know where he’s at on the field.”

Texas-OU experience: This will be Orlando’s second trip to the Cotton Bowl and Hand’s first. Both have been in big-game environments before, but both agree the Texas-OU game is different.

“To me, it’s different because of what this great state represents,” Orlando said. “You feel a big responsibility to making sure your guys are prepared and they show up and play. We’ve all been in big games beforehand, but you’re talking about the state of Texas. You’re talking about Texas football. This place is something special.”

Hand coached at Auburn, so he’s familiar with the Iron Bowl against Alabama. That rivalry may be heated, but the stadium isn’t cut in half for both teams’ fan bases.

“I’ve watched this game many times,” Hand said. “You just prepare each week to go out and play the best you can.”