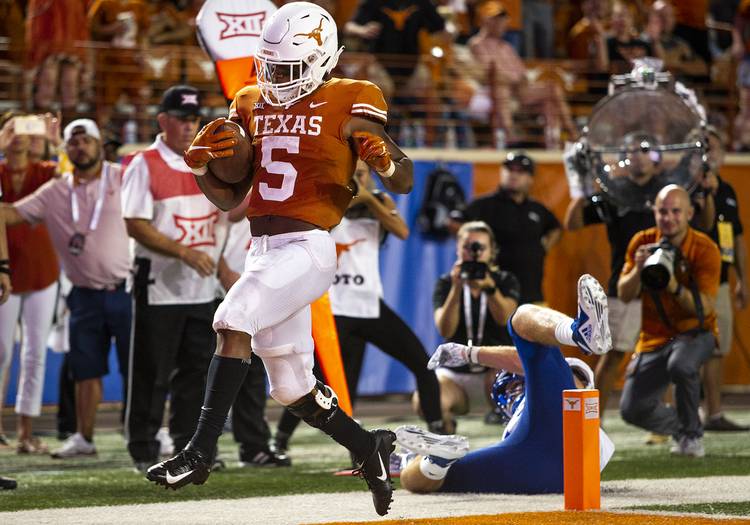 Texas running back Tre Watson (5) runs into the end zone for a touchdown against Tulsa in Austin on Sept. 8, 2018. NICK WAGNER / AMERICAN-STATESMAN

This week’s notable number is 46 — the number worn at Texas by freshman linebacker Joseph Ossai, who inherited it from Cincinnati Bengals rookie Malik Jefferson. The longest of UT freshman Cameron Dicker’s five field goals this year were two 46-yarders against USC. Ricky Williams, the 1998 Heisman Trophy winner and Texas’ all-time leading rusher, played in 46 career games as a Longhorn.

And Chris Ogbonnaya caught 46 passes during the 2008 season. That still stands as the single-season standard for a Texas running back.

Teams using running backs in the passing game isn’t a novel concept. In fact, three of the five NFL players who have had a 14-catch game this season are running backs (Alvin Kamara, Saquon Barkley and Christian McCaffrey). Washington State’s James Williams and Arizona State’s Eno Benjamin both lead their teams in rushing while also ranking second in receptions. Middle Tennessee running back Brad Anderson has a team-high 22 catches.

This year, freshman Keaontay Ingram leads all UT running backs with 10 catches. The other nine receptions by running backs have been split between Tre Watson (six) and Kyle Porter (three).

“I think there’s no doubt that Tre and Keaontay are probably in another tier in terms of ability in that room to affect the passing game in terms of running routes and ball skills and all of that,” UT coach Tom Herman said recently. “We’re where we need to be.”

One of Watson’s receptions was an 11-yard touchdown against Tulsa that ended up being the decisive score in a 28-21 win. Last week against Kansas State, Ingram caught three passes as Texas put the game away in the final drive. Porter, who may redshirt the rest of this season, was targeted three times on the final drive of a 34-29 loss to Maryland that.

Texas occasionally lines its running backs out wide, but the backfield has primarily been used as a safety valve. Sophomore quarterback Sam Ehlinger has not been intercepted over the last four games, a 128-pass streak that ranks third in the UT record book. Fourteen of the 87 completions during that streak — none covering more yardage than Watson’s touchdown — have been caught by either Ingram or Watson.

“It’s been incredible to have those two guys, not just two of them but all of (the running backs), be consistently running the ball well… and then also contributing in the passing game,” Ehlinger has said. “It definitely increases my level of confidence to know that if everything is covered up in the back-end, they’re going to be where they’re supposed to be.”

Both Ingram and Watson have showcased their hands in their past. Five of Watson’s 13 touchdowns at Cal were receptions. Ingram had 47 catches during his junior year at Carthage High.

The Dotted Line: A win over Oklahoma would give Texas hope recruiting DFW

Stalling out close: Longhorns need to keep things moving inside the 20-yard line