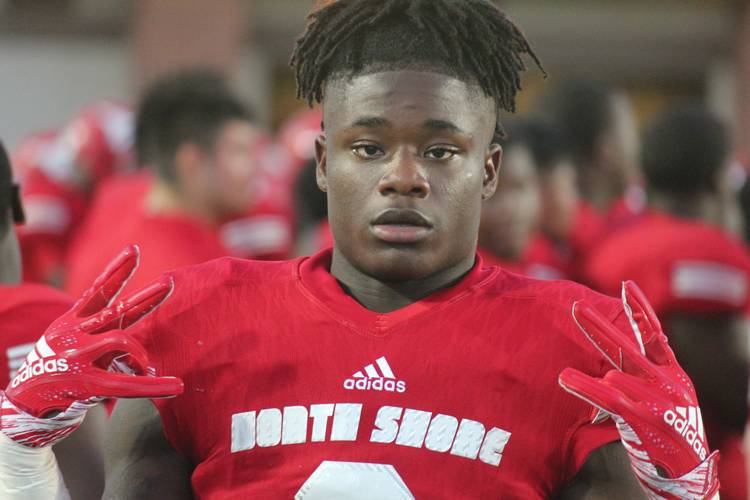 HOUSTON – Two of the nation’s best prospects in the 2020 class played against each other Thursday night when five-star running back Zach Evans and Galena Park North Shore beat four-star safety Bryson Washington and C.E. King, 58-0. Evans wasn’t asked to do much in the win as the undefeated North Shore program scored two special teams touchdowns in the first half and coasted to another win in its bid to win a Class 6A state championship.

Evans is the top player junior in Texas. The 5-foot-11, 203-pound running back holds 36 offers and is arguably the top priority on offense for the Longhorns since Texas already holds a pledge from Lake Travis quarterback Hudson Card. Tom Herman and company must beat out Oklahoma, Alabama and plenty others for Evans, who doesn’t plan to pick a school until late in his cycle. He’ll attend the Texas A&M game on Saturday.

“Recruiting class will important because I want to follow the offensive line. I look at the commits they have now, the class ahead of me and behind me,” said Evans following the win on Thursday night. “That’s how you build something.”

Evans talks with Texas running back coach Stan Drayton “every other day” and is an admitted fan of the program. That doesn’t mean Evans will only follow his heart. It’s about football for the five-star talent and he’s going to the place that best suits his skills and lends convinces him of its plan to utilize him not only as a running back, but as a weapon at slot receiver.

“Texas is still my team and they’re still good. I want to see them flex out the back more because I don’t to just run the ball,” Evans said. “It’s important because teams start to stack nine in the box and you have to do something. That will open up the holes in the run game.”

Washington plans to attend the Red River Showdown on Saturday as a guest of Oklahoma. The home can host recruits and it’s the Sooners’ turn. Washington is a 6-foot-2, 196-pound thumper who compared his game to current Texas freshman and former five-star recruit BJ Foster. He’s also impressed with the play of another true freshman safety.

“Texas is a great school. I’ve visited there a few times and it is beautiful. I think they’ll have a good season,” Washington said. “Coach (Craig) Naivar is a crazy cool coach. He does a good job with the defensive backs. He’s doing great things with Caden Sterns and BJ Foster.”

Washington plans to pick a school on July 4th and hopes to visit Miami and Michigan before his junior season ends. He wouldn’t make a prediction for the game between Texas and Oklahoma on Saturday, but he did say he wanted to see both teams show fight.

“Recruiting is as fun as you make it,” he said Thursday night. “I want it to be about family, teamwork and a good environment to win and call home.”

The four-star is noticing improvement as an upperclassman. He’s no longer solely relying on his athleticism. Washington is becoming a real safety and it’s allowing his freakish skills to shine. He was one of the lone bright spots for C.E. King on the night in a blowout loss.

“I feel more aware on the field. I wasn’t as involved at my position as a sophomore. I understand things more now and that’s slowed down the game for me, which lets me play faster,” Washington said. “It’s hard to play your best when you’re unsure of what to do.”