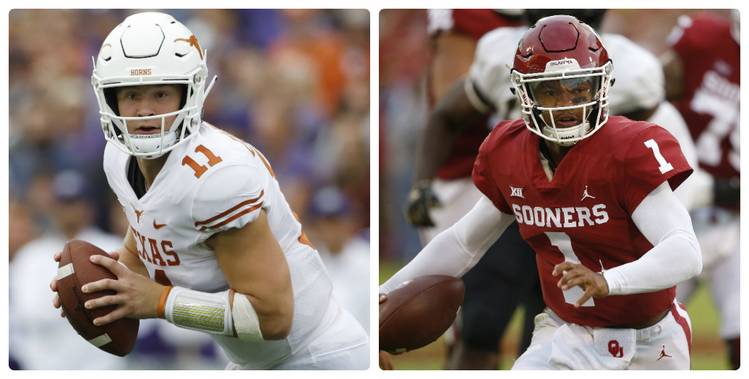 Texas quarterback Sam Ehlinger will make his second trip to the Cotton Bowl this week while Oklahoma freshman Kyler Murray will be making his Texas-OU debut. AP Photos

Chased toward the sideline last season, Texas quarterback Sam Ehlinger got yanked down with all the viciousness you’d expect in the Red River Showdown.

Maybe Ehlinger got knocked out on that fourth-quarter play. Maybe he didn’t. The Westlake product swears his only concussion last season came against Oklahoma State. Still, those in the Cotton Bowl’s north end grew nervous while the south end was electrified.

Ehlinger, then a freshman, returned to the game but looked off. He threw a pass out of bounds on fourth down, the Longhorns turned the ball over on downs and the Sooners escaped with a 29-24 win.

“I would say I’m a completely different player from last year,” Ehlinger said this week. “Every week, I’ll always rewatch our game from last year. It’s eye-opening some of the things that seem so elementary this year that were mistakes last year.”

Ehlinger heads into his second Texas-OU matchup with more experience but less fanfare than his crimson counterpart. OU redshirt junior Kyler Murray has been dynamite in five games so far against lesser competition.

Murray, the son of former Texas A&M quarterback Kevin Murray, got some of his confidence from his father. “I’ve watched a lot of football growing up,” Murray told reporters in Norman this week. “The great ones can do it under pressure. I just strive to be as great as I can whatever sport I’m playing.”

Murray led Allen to three state championships in high school and was the nation’s No. 2-ranked dual-threat quarterback prospect in 2015. He played one season at A&M but transferred to OU knowing that Baker Mayfield would likely jump to the NFL after his junior year.

The two-sport star was drafted ninth overall by the Oakland A’s in June. That draft slot was worth $4.76 million, according to estimates. Why a multi-millionaire outfielder would risk his health by running around the Cotton Bowl is anyone’s guess.

“Kyler was a celebrity in high school,” UT safety Brandon Jones said. “All the followers he had on Instagram and Twitter. Everybody knew him, and it was up for debate about him being one of the greatest high school players of all time. Yeah, it was a big thing.

“He’s kind of always had this celebrity status. It makes sense, because he kind of deserves it.”

Murray is the reason why the Sooners are 7 1/2-point favorites in this matchup. He’s already thrown 17 touchdown passes and has completed 70.6 percent of his throws. All Murray has to do is lay it out there for receivers Marquise Brown and CeeDee Lamb. Both have five touchdown catches each. Together, they average about 20 yards per reception.

“Collectively, we’ve got a better grasp of the system,” Orlando said, “and guys understand a little bit more of what’s going on.”

Against OU, there were some clear communication breakdowns. The biggest came in the fourth quarter when Sooners tight end Mark Andrews got wide open for a 59-yard touchdown catch. Andrews finished with four catches for 104 yards as Mayfield ended the day by planting the OU flag at midfield.

Oklahoma hit on a winning formula last season in Dallas. Why change it now?

“I know we’re going to see a lot of switch routes,” Jones said. “We’ll probably see a lot of double moves. I wouldn’t be surprised to see some type of reverse pass, some type of special play they have stored in their playbook.”

Jones said the OU receivers can run deep, and Murray “will put the ball on the money. I think he really trusts their speed, and they’re going to try to beat us deep.”

“I think we’re more comfortable with our assignments,” Locke said. “We know where our help is — left and right. If you know where your help is, that allows you to trigger faster.”

Ehlinger’s crew doesn’t have as much game-breaking potential. It’s been a struggle at various points this season. Texas scored only one offensive touchdown last week against Kansas State. UT is tied with Kansas for seventh in scoring (28.8) in the Big 12. Oklahoma ranks first (48.6).

“Preparing for Kansas State in practice, it was like an inside drill every play,” UT defensive tackle Chris Nelson said. “We knew what they are going to do, so we prepared hard. OU is more versatile. They’re all over the field, have a great quarterback, great receiving corps.”

This week, it sounded like the Longhorns were happy to let the Sooners have the pre-game spotlight. Let them soak up all the attention.

“It’s a big game, don’t get me wrong,” UT’s Lil’Jordan Humphrey said. “Probably one of the best rivalries in college football. But we’ve got to treat it like every other game and work hard this week.”

Don’t be fooled, though. Humphrey grew up in Southlake, just a short drive from Dallas over into Northeast Tarrant County. He knows what this game means. “I never thought I’d be able to play in this game,” Humphrey said. “To be able to, it’s exciting. Very exciting.”

“The Texas-OU rivalry is one of the best in the nation, if not the best sporting rivalry,” Ehlinger said. “To have both teams ranked in the top 25, both be undefeated in conference, this is how it should be.

“This is why you come to the University of Texas to play in this game.”

Players come to Texas to win these games. “I can’t wait,” he said.

The Dotted Line: Texas, Oklahoma battled for top recruits in 2018. Who can claim victory?