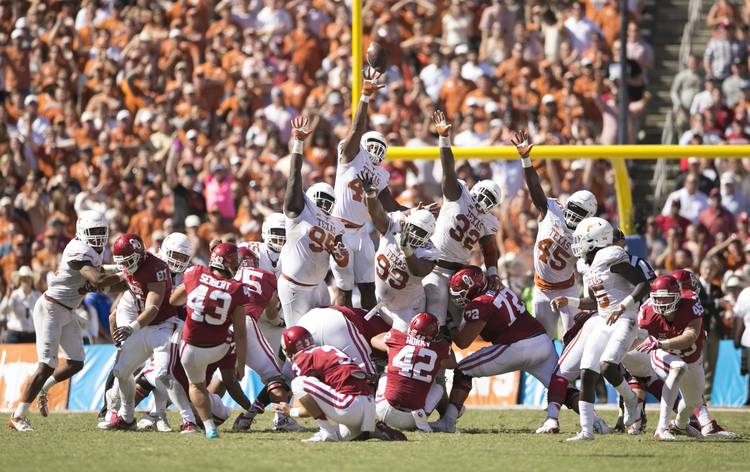 Here are five key matchups in the Texas-Oklahoma game to keep your eye on Saturday:

Perkins is making quite a splash at Oklahoma in his freshman season. He’s got three sacks, three quarterback hurries and four tackles for loss. The St. Louis native came to Norman as the No. 1-rated recruit in Missouri. Cosmi, a redshirt freshman from Humble, smashed a Maryland defender into next week in his debut game. Cosmi has been a steady presence at right tackle throughout UT’s past four wins. He’ll have some help from right guard Derek Kerstetter, too.

2. Texas quarterback Sam Ehlinger vs. … himself

Call it 2018 Ehlinger vs. 2017 Ehlinger. Every week, Ehlinger goes back and watches game film from his freshman season. The sophomore just laughs at some of the mistakes that are now obvious on film. The Sooners are facing a far more experienced player this time around, not the same gunslinger they almost knocked out of last year’s game. Ehlinger’s numbers are up across the board and he hasn’t thrown an interception in four games. He’s completed 64.7 percent of his throws and has nine touchdown passes. Last season, he erased a 20-point deficit to the Sooners before losing 29-24. If the Sooners underestimate him, they’re in trouble.

Defensive ends Charles Omenihu and Breckyn Hager both made huge impressions last week at Kansas State. Omenihu had two sacks and a safety while Hager had a sack and a pass breakup at the line of scrimmage. They’ve got to keep building off those performances and help defensive tackle Chris Nelson. The Sooners have experience up front, though. Senior guards Ben Powers and Dry Samia are key reasons why OU is averaging 48.6 points per game — eighth-best in the country. The Sooners also are converting 55 percent of their third-down attempts compared to UT’s 41 percent.

Big games like this always come down to field position and special teams. Texas’ punting and kicking units, led by two freshmen, have been average thus far. Punter Ryan Bujcevski is averaging 37.5 yards per attempt and got one partially blocked last week. Kicker Cameron Dicker is 5 for 8 on field goals with a season-long from 46 yards. Seibert does both for the Sooners. He’s averaging 42.4 yards per punt and drilled a 53-yard field goal against Florida Atlantic. The Horns could use another big punt return from D’Shawn Jamison this week, too.

On paper, the Sooners’ five victories look awfully impressive. But dig deeper, and you’ll see OU has only beaten two teams with winning records — Army and Baylor. Meanwhile, Texas has knocked off No. 22 USC, No. 17 TCU and Kansas State as part of its four-game winning streak. Those Power 5 wins sure look better than OU’s. This game is always a coin flip. Sometimes the better team doesn’t win. Anything can happen, and anything goes. On Saturday, the intangibles favor the Longhorns in this matchup against Kyler Murray and Co.

The Dotted Line: Texas, Oklahoma battled for top recruits in 2018. Who can claim victory?