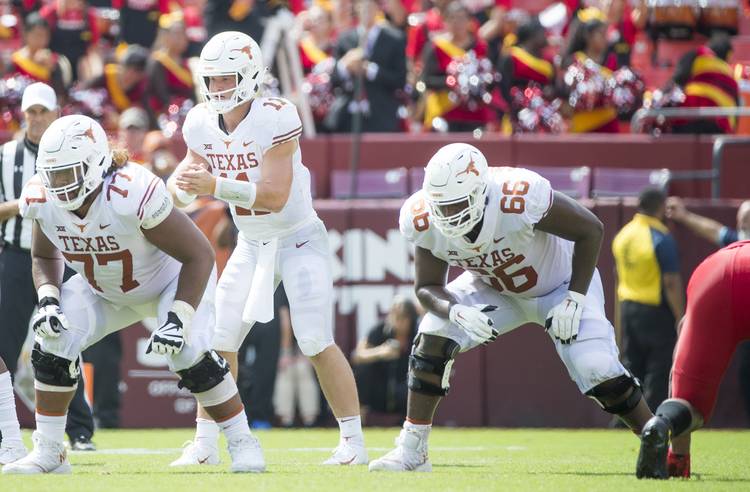 Five questions facing Texas on Saturday in the Cotton Bowl against Oklahoma:

If he does, the four-star freshman from Carthage would set a new career high. Ingram has been slowed at times by knee and hip injuries and Texas hasn’t shied away from using graduate transfer Tre Watson and sophomore Daniel Young. But Ingram is averaging 6.1 yards per carry and his 10 receptions lead the UT running backs. When asked about making him a 20-carry back on Monday, Texas coach Tom Herman said that “Certainly, he’s ready.”

2. Will the offensive line once again shine?

For the first time this season, the Texas coaching staff gave the offensive line a championship grade for its performance in the win over Kansas State. The Longhorns’ line allowed two sacks and was penalized once. Texas scored one offensive touchdown, but co-offensive coordinator Herb Hand pointed out that the other seven offensive possessions included a field goal, a missed field goal and a kneel-down near the Kansas State 20. Will UT keep that up against Oklahoma?

3. Will Texas limit the number of OU’s offensive big plays?

According to cfbstats.com, Oklahoma ranks second nationally with eight plays of 50-plus yards. Texas has lost the last two meetings with the Sooners in part because Oklahoma filled up the highlight reel with big scoring plays. In a 45-40 decision in 2016, Dede Westbrook scored on 42-, 47- and 71-yard catches. Oklahoma opened last year’s 29-24 victory with a 54-yard touchdown and the winning points were scored on a 59-yard catch.

4. Will Sam Ehlinger break a record on Saturday?

Ehlinger has only lost one fumble over the course of UT’s four-game winning streak. In fact, his last 128 passes have not been intercepted. That streak dates back to his final throw against Maryland on Sept. 1 and ranks third in UT’s history books. He’s 28 passes away without a pick to tie Major Applewhite’s school-record mark set in 1999. In last year’s loss to the Sooners, Ehlinger threw it 39 times and was not picked.

Since the Longhorns ousted USC in mid-September, questions have consistently been asked about Texas’ return to national prominence. The Longhorns are currently enjoying their longest winning streak since 2013, but the No. 7-ranked Sooners will present them with their biggest challenge of the season. Texas last beat a team ranked in the top 10 in 2016. If UT can do that on Saturday, the hype machine may be impossible to stop.

The Eyes of Texas: Four players to watch in Saturday’s Longhorns-Sooners game