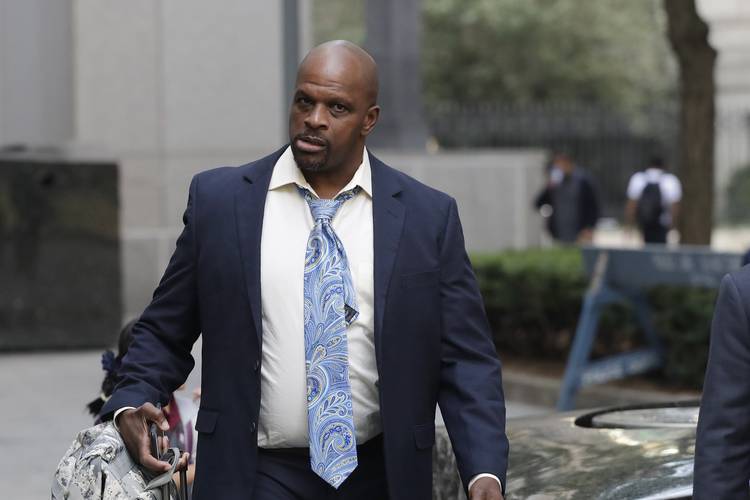 Brian Bowen Sr. arrives at federal court, Thursday, Oct. 4, 2018, in New York. When Brian Bowen Jr., one of America's brightest high school basketball stars, announced in June 2017 that he would attend the University of Louisville, a school that had not been on anyone's radar as his possible destination, sportswriters called it a coup that "came out of nowhere." In a trial that began Monday, federal prosecutors will argue that the signing wasn't luck at all but the result of a payoff to Bowen's father. (AP Photo/Mark Lennihan)

Texas compliance officials monitored the recruitment of star basketball recruit Brian Bowen Jr. in real time, and school officials believe there were no NCAA violations committed, according to two sources.

Bowen’s father, Brian Sr., testified on Friday that former UT assistant Mike Morrell once offered to “help me with housing” during the recruitment of his son. Brian Bowen Sr. also detailed specific financial offerings from other schools, including Oklahoma State and Arizona.

Texas athletic director Chris Del Conte told the American-Statesman on Friday he was aware of Bowen’s recruitment and the steps compliance took.

In a statement distributed by UT, Del Conte said, “In response to the NCAA Board of Governors memo last year charging institutions to examine their men’s basketball programs for possible rules violations, our compliance office conducted a review and did not find any information that substantiates the recent testimony at the U.S. District Court in the Southern District of New York.

“We will monitor the information from the court proceedings and continue to cooperate fully should there be any requests from the NCAA,” Del Conte added.

Bowen’s recruitment is at the heart of a federal investigation about college basketball recruiting.

The Eyes of Texas: Four players to watch in Saturday’s Longhorns-Sooners game