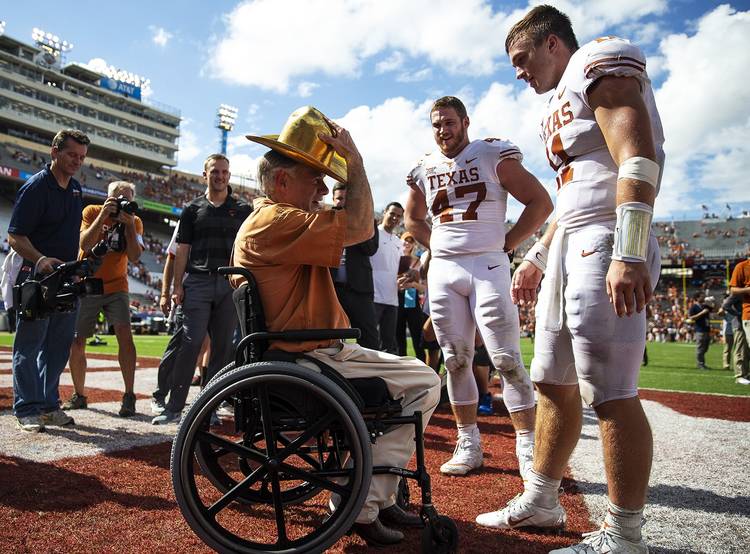 Texas made a seismic jump in The Associated Press Top 25 poll Sunday, leaping 10 spots to No. 9 this week. It’s the program’s first top-10 appearance since 2010 and validates the Longhorns’ current five-game winning streak.

Opposing coaches tried to warn everyone this — or at least something — was coming.

Oklahoma defensive coordinator Mike Stoops offered a point-blank assessment after Saturday’s 48-45 shootout in the Cotton Bowl. “I thought they played more physical than we did today,” he said.

Imagine that. Texas was the more physical team in the Red River Showdown. That may have been part of the reason Stoops was fired late Sunday, according to reports in Oklahoma.

All Texas coach Tom Herman demands are two things: effort and ball security. Is it possible these Longhorns (5-1, 3-0 Big 12) are the toughest, most hard-nosed team in the Big 12 this season?

Oddsmakers might think so. Texas opened as a 16-point favorite this week over Baylor (4-2, 2-1). Kickoff is scheduled for 2:30 p.m. Saturday at Royal-Memorial Stadium.

No one can question this team’s effort at the moment. And ball security? The Horns haven’t lost a fumble in three games. Quarterback Sam Ehlinger hasn’t thrown an interception in the past five. He’s now attempted 163 passes without an interception, surpassing the school record of 156 held by Major Applewhite.

“If there’s one compliment a coach can get from people who understand football or put the pads on, it’s that your guys played really hard,” Herman said. “That’s the biggest compliment you can give a head coach.

“We may not always be the most talented or deepest, but with our effort and our purpose, we’re capable of doing lots of things.”

Herman’s comments came as he was discussing Lil’Jordan Humphrey’s 19-yard catch on third-and-21. He turned a midrange gain into something much bigger out of sheer determination.

“I take a lot of pride in it,” Humphrey said about the signature moment of his career-best performance. He had nine catches for 133 yards and a touchdown. “I felt like it showed how tough you can be. That play, I just got the ball and, like Coach always preaches in practice, get vertical.”

It’ll probably be one of the top five plays of the season for what it meant during the game and to Herman’s program.

“Thank you, LJ, for showing everybody what our culture is about,” Herman said. “That was big.”

There were effort plays all over the field against OU.

Safety Brandon Jones had an interception in the first quarter. On OU’s next offensive play, Jones flashed amazing closing speed to stop Trey Sermon for a 1-yard gain. It was one of his team-high nine tackles.

Freshman B.J. Foster missed the Kansas State game with a concussion. He had six tackles, two for loss, against OU. Early in the fourth quarter. Foster came on a blitz, got blocked to the ground, stayed with the play and basically rolled up Kyler Murray for a sack.

Defensive tackle Charles Omenihu got a sack on a jailbreak play on which OU’s offensive linemen appeared to be setting up a screen. The next play, Omenihu dropped Murray for a 1-yard loss on sheer hustle.

“With that guy at quarterback, running around like that, it makes it hard for a defense,” linebacker Gary Johnson said. “To contain him a little bit, it felt good.”

Offensively, Ehlinger took two sacks, but generally he had time to throw. That’s a credit to his offensive line, sparked by the full return of center Zach Shackelford. Left tackle Calvin Anderson did not give ground. Left guard Patrick Vahe deserved to plant the UT flag at midfield after the win, just as OU’s Baker Mayfield did last season.

Ehlinger had it easy on several running plays. All he had to do was get behind right guard Elijah Rodriguez, right tackle Samuel Cosmi and running back Keaontay Ingram and scamper into the end zone. For his five-touchdown effort, Ehlinger was named the Walter Camp Offensive Player of the Week on Sunday.

Tight end Andrew Beck made a terrific catch for an 18-yard gain on a scoring drive that gave Texas a 17-10 lead. His 7-yard catch late helped set up the winning field goal.

Humphrey, Collin Johnson and Devin Duvernay did most of the damage at receiver. The Horns have stopped rotating every receiver on the roster into the game, and those three are rewarding the coaches with results.

“I know he’s missed two of his last three before this game, but I don’t know that there’s a kicker on the planet who has not missed,” Herman said. “Our confidence in our kicker is sky-high right now.”

Sky-high expectations ruined some other Texas teams this decade after just one or two wins. As long as they continue to follow Herman’s key themes — go 1-0 every week, give great effort, protect the football — there is no ceiling.

“The only thing that’s back is we’re going back to work to beat Baylor,” defensive end Breckyn Hager said. “Hook ’em.”