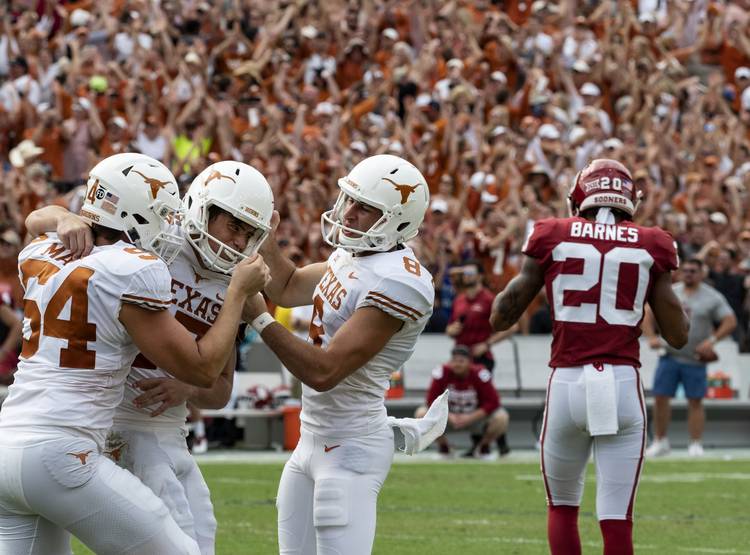 DALLAS — There were 133 snaps taken in Texas’ 48-45 win over Oklahoma on Saturday. Here are five that ended up making a big difference:

Texas quarterback Sam Ehlinger accounted for five touchdowns in the 113th installment of the Red River Showdown. Ehlinger was named the Walter Camp Offensive Player of the Week a day later, and he will probably be a contender for the Big 12’s weekly offensive honor. Ehlinger, though, did not own his team’s best completion percentage Saturday.

Receiver Lil’Jordan Humphrey completed both of his passes, one of which was an 8-yard toss to Ehlinger. (Ehlinger was 25-for-35 against the Sooners.) Humphrey’s first pass, though, was a 2-yard touchdown toss to Collin Johnson.

UT’s first touchdown of the day was set up when Humphrey took a direct snap. As Oklahoma played the run, Humphrey jumped and popped a perfect pass to Johnson, who was open in the end zone. The Longhorns tied the score 7-7 on that play.

2. Nothing Lil’ about it

Texas picked up 27 first downs and scored six touchdowns at the Cotton Bowl. The Longhorns, however, did not earn either on what head coach Tom Herman called the “play of the game.”

UT led 24-17 at halftime but faced a third-and-21 from the Oklahoma 46 on the second half’s first drive. With Texas playing it safe, Humphrey received a short screen pass. The junior then pushed a pile of Sooners to the Oklahoma 27 with the assistance of a few of his linemen.

UT turned a Brandon Jones interception into a field goal in the first half. With Texas leading 31-24 in the second half, a scrambling Murray lost the football. Defensive end Breckyn Hager jumped on the fumble at the Oklahoma 23, and Texas later scored to push its lead to 14 points.

Texas led by as many as 21 points in the second half, but Oklahoma went on a scoring spree in the fourth quarter. Trey Sermon’s 7-yard touchdown run with 2 minutes, 38 seconds remaining put a 45-45 tie on the scoreboard. It was Oklahoma’s third touchdown in a 6-minute span.

The Sooners’ biggest play was Murray’s 67-yard touchdown run with 5:11 left. Murray also threw a 77-yard touchdown pass to Marquise Brown in the third quarter. Brown’s score was the longest reception by a Sooner in the Red River Showdown, which was first played in 1900.

In its past three meetings with Oklahoma, Texas has allowed five touchdowns that covered at least 50 yards.

After Oklahoma’s rally, Texas was given enough time to respond. The Longhorns went 52 yards on a 9-play drive keyed by Ehlinger’s 4-yard run on a third-and-3 and a pass interference call drawn by Johnson.

That set up freshman Cameron Dicker for a 40-yard field goal from the left hash mark. Facing Oklahoma’s end of the Cotton Bowl, Dicker calmly kicked it through the uprights with 9 seconds remaining. It was Dicker’s second field goal of at least 40 yards against the Sooners. He has hit four such field goals this season.

Texas now holds a 62-46-5 lead over Oklahoma in its all-time series.