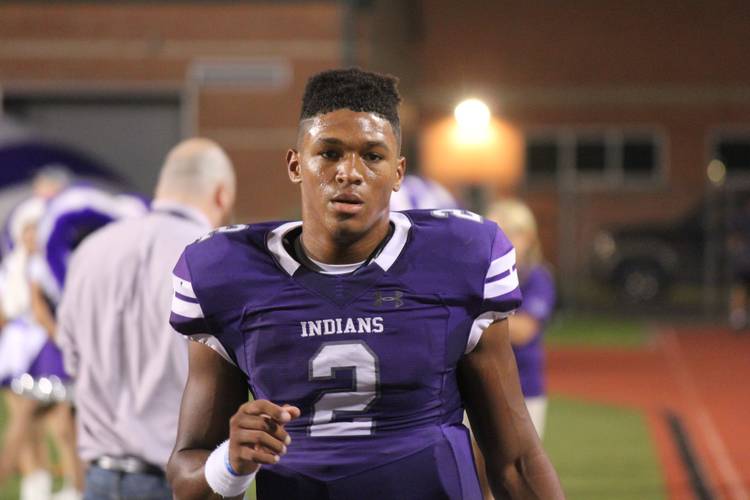 Johnson — the first pledge for Texas’ 2019 recruiting class — thrives in pressure situations. It’s why he chose to play quarterback. It was him and his teammates looking at a win, and Johnson led the game-winning drive to beat Vidor 38-32 in a key district game. He even forced his way onto the field as the Indians held on defense as time expired, playing deep safety on the last play of the game.

“I’ve always felt comfortable with the ball in my hands,” Johnson said. “I’ve always felt I’m the most threatening player on the field, so these are the moments you do all that work for in the offseason. We didn’t play great early as an offense, but we kept punching. We just kept playing through the mistakes and found a groove.”

Johnson ended the game with five total touchdowns. The 6-1, 192-pound dual-threat prospect ran for 196 yards and four touchdowns, adding 112 yards and a touchdown through the air. He accounted for 308 of Port Neches-Groves’ 365 yards. He ranks No. 25 on the 2019 Fabulous 55 and is considered the No. 4 dual-threat quarterback in the country.

“Roschon wants the ball. He was ready as soon as they scored to tie the game,” said Port Neches-Groves head coach Brandon Faircloth. “He’s a vocal leader. He leads by example. He’s everything you want as a coach in these types of big games and settings.”

Johnson is a three-year varsity starter with clout as a winner and a player who can put up video game numbers . He was a finalist at the Elite 11 event in California over the summer and was the Quarterback MVP of The Opening regional in Dallas. Johnson is not satisfied. He prides himself on picking one thing each day to work on as a player.

“I’ve gotten a whole lot better at seeing the defense and getting a feel for things,” he said after Friday’s win. “From avoiding defenders and still finding a receiver instead of tucking it to run to really seeing the whole field and understanding what the defense is trying to do, I think I’ve improved a lot since my sophomore year and there is still work to do before I’m ready for college.”

Johnson isn’t the only Indians player that Texas is recruiting. His right tackle, Jaylen Garth, is one of the top offensive line prospects in the 2020 class. The 6-4, 285-pound four-star is high on Texas and Johnson stays in his ear about improving and following him to Austin.

Garth is a big, powerful lineman who may slide to guard once he reaches college unless he adds another inch or two to his frame.

“I’m on (Jaylen) all the time,” Johnson said. “Not just about Texas and all that, but about the process and how to work each day to improve. He can truly be as good as he wants to be.”

“He’s the complete package. He’s extremely intelligent, he has some natural gifts you can’t teach, but he also has good feet and is strong,” Faircloth said. “We’ve been coaching him since seventh grade and knew he could be special. Jaylen is an athlete and he works hard, and that is a great combination for a big man like him.”