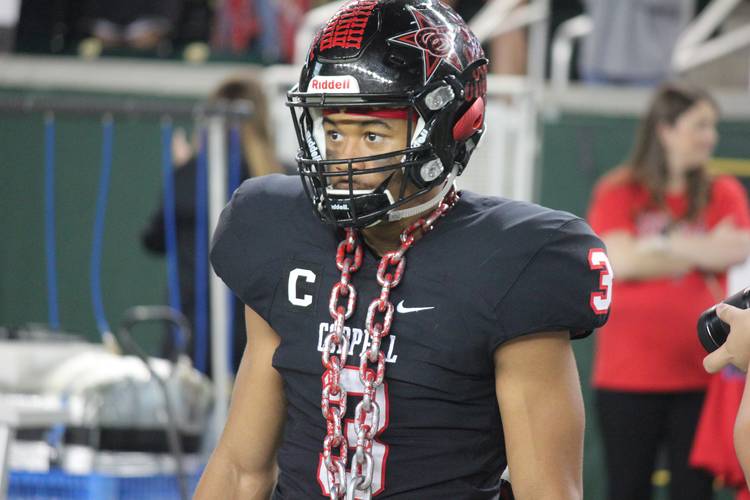 The commitment of four-star safety Lewis Cine to Georgia lowered the uncommitted number of Fabulous 55 members to just seven. The early signing period combined with the ability to take official visits as juniors sped up an already fast recruiting process:

Stripling was pegged as a Texas A&M lean early in the process and the Aggies are still in great shape for the top-rated uncommitted prospect in the state. Stripling is a big-bodied defensive end who could grow into a three-technique defensive tackle. He lacks ideal height but his frame gives him a leverage advantage and he’s much quicker than his weight suggests.

Catalon suffered a season ending knee injury in the season opener. The two-sport star wants to pick a school where he can play safety and center field in baseball, though football is his top priority. He’s in no rush to pick a school and is on record saying he wants to wait until December. Texas is in great shape, as is Arkansas. His relationship with Craig Naivar is the key for the Longhorns.

Higgins is an Austin product who remains a target for the Longhorns. Texas doesn’t lead, however, and it would be surprising at this point if the big wide receiver chose to stay home. Stanford is probably the team to beat and Higgins enjoyed his recent official visit to Florida. He’s also talked about joining Lake Travis’ Garrett Wilson at Ohio State.

Curry racked up video game numbers as a junior with fellow Fab 55 member Grant Gunnell slinging the football against lesser TAPPS defenses. The combination has picked right back up as seniors and most thought the duo would wind up at the same college. Gunnell is a former Texas A&M commit now pledged to Arkansas. Curry could blaze his own path in the SEC or Big Ten.

Glass is one of the best and most productive running backs in the state. Oklahoma State is the leader for the current workhorse of the Katy offense. Glass is a thumper and a one-cut runner who doesn’t possess blazing speed or a monster frame. He runs hard, shows great balance and does the little things like blocking and catching out of the backfield.

McGill would be a five-star talent if he was five inches taller. He lives around the football and doesn’t let his smallish frame stop him from exerting physicality onto an opposing offense. He can play nickel or deep safety. Stanford is probably the team to beat.

Ugwoegbu is an intriguing prospect with unlimited upside. He’s a big, long defensive end with a motor. He’s also raw as a football player and needs some time to be coached up. The potential earned him offers from every major program in the country and the Aggies are the team to beat with two months until the early signing period.

This is Texas: Team’s identity has emerged by overcoming deficiencies through brute force